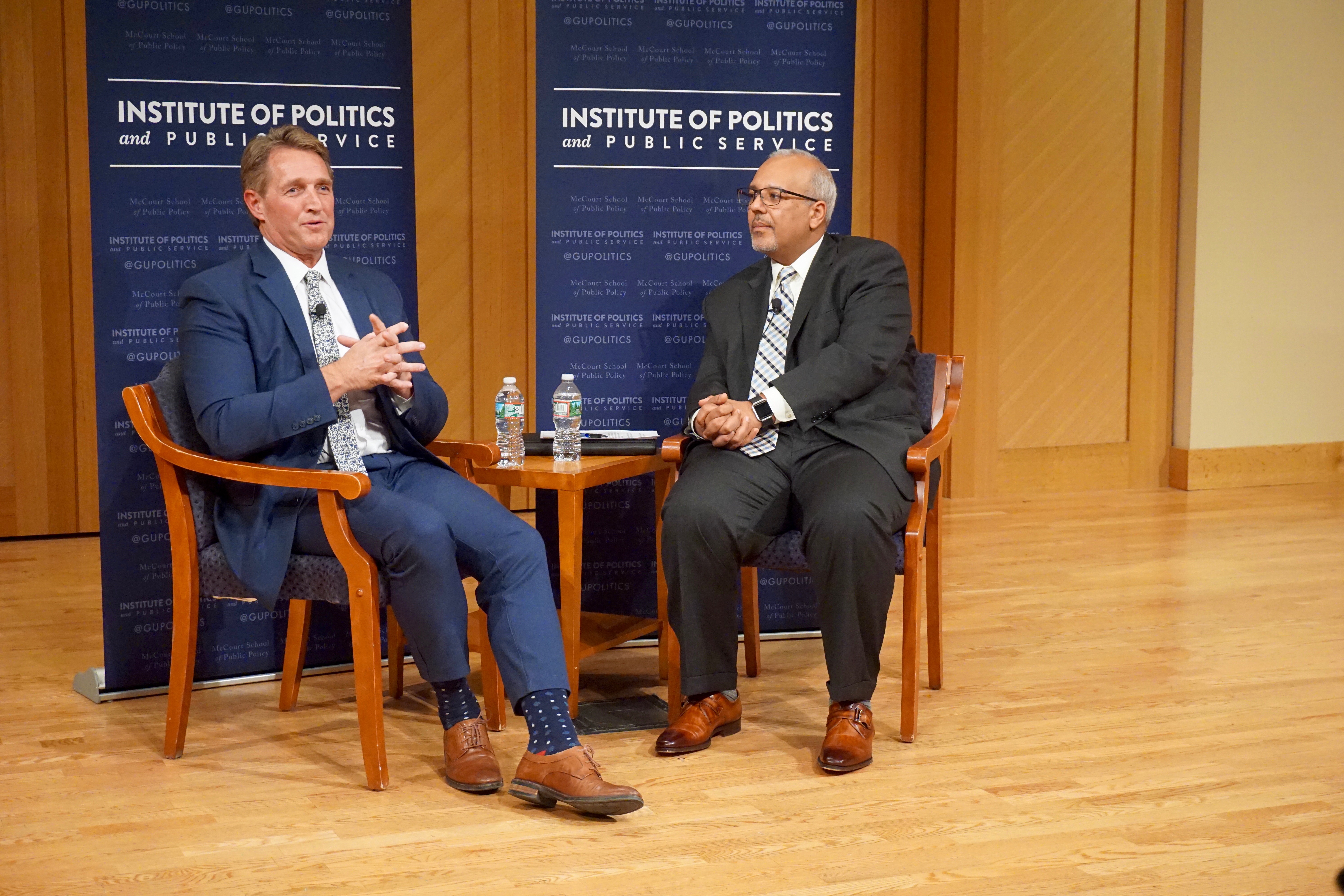 Republican senator Jeff Flake from Arizona spoke at Georgetown about his discontent with the direction of the Republican party on Monday, Jan. 29 in an event hosted by the Georgetown Institute of Politics and Public Service (GU Politics).

The discussion, “A Conversation on Conservative Politics with Jeff Flake,” was moderated by Mo Elleithee (SFS’94), executive director of GU Politics.

The main focus of the discussion centered around Flake’s recent book, Conscience of a Conservative: A Rejection of Destructive Politics and a Return to Principle,  which focuses on his grievances with the current state of the Republican party.

Flake said he believes the Republican party “lost [its] way” before President Trump came to the scene and deviated from its fundamental principles. He discussed the debate over kneeling during the national anthem as an example.

“We got away from limited government. And because we couldn’t claim that we were the party of limited government, we had to wage some of the cultural wars. That never goes well for a party when they have to do that,” said Flake. “You know arguing about somebody kneeling during the national anthem, those things are important but [go] in place of what ought to be the arguments we need to have in Washington.”

Flake acknowledged voter discontent and its correlation to President Trump’s populist rise to power and said Trump’s successes stemmed from his skill in motivating discontented Americans to go to the polls. Now, he said, the president has to act on his promises.

Flake spoke on various issues throughout the conversation, including fundamental Republican ideals, his career in politics, federal judge nominations, and the Tea Party movement. He also answered questions from the audience on abortion rights, the future of trade agreements, and the appointment of Supreme Court justice Neil Gorsuch. Flake called the president’s use of ‘Fake News’ “dangerous.”

“We have to be careful about what we say because words matter, particularly for journalists around the world,” said Flake. “And I don’t want a chilling effect on our press here as well.”

Although retiring after this term, Flake said he will use his remaining time in the Senate to contend for the Republican Party to return to its fundamental principles—especially those regarding immigration. In order to support his family farm, Flake said they relied on migrant labor.

“I got to know these migrants. I knew why they were coming, what their motivation was,  and I have never been able to look at them and see a criminal class,” he said.

Flake said immigrants should be welcomed into the Republican party and warned of the dangers of rejecting these voters.

“I think as a Republican, as a conservative, that immigrants and minorities should gravitate toward our party,” Flake said. “But if we are seen as a party that is not friendly towards immigrants…  you just don’t ever get to have the conversation that you need to have to say, ‘hey you really ought to be with our party!’”

Elleithee, too, said he agreed with the Senator’s analysis of the GOP’s ideological shift.

“The biggest problem that the Republican party faces right now… is sort of an abandonment of its ideals. As the Senator was saying, it seems to have walked away from its core reason for existence,” he told the Voice after his discussion with the Senator. “And some within the party are stirring up division for political expediency as opposed to getting back to what its about.”

As a former Democratic strategist, Elleithee observed how the current political environment affects his own party. He said the division between factions in Washington was not just a Republican problem.

“I think both parties have closed a little too close to the flames of tribalism,” he said. “There is this great ‘otherization’ in our political discourse right now where people feel like everyone else is getting theirs and no one is helping me get mine.”

Audience member Jordan Schildkraut (COL’20) has read Flake’s book and has followed the news surrounding Flake’s criticism of the president during Trump’s first year in office. During the event, Schildkraut said he appreciated Flake’s candor.

“He was very receptive to questions that clearly came from both sides of the aisle. I personally am someone who doesn’t agree with everything he has to say, but I respect his honesty, and his apparent integrity and willingness to stand for his values even when I don’t agree with them,” Schildkraut said.

Although America’s political system seems to be at a crossroads, Flake was hopeful nonetheless about the future.

“We have massive problems here in the country,” said Flake. “But when we look over history, with the Civil War and women’s suffrage that we’ve gotten through. And that we’ve found a way to be on the right side of, the challenges that we face today are small by comparison. It just takes good will on both sides.”

To overcome these challenges and achieve progress, Elleithee said that competition and disagreements were crucial to democracy, but added that understanding others’ perspectives is crucial during a time of acute political polarization and disfunction.

“Throughout our history we have always been a partisan nation— it’s kinda in our DNA. But when the partisan fight becomes the end, rather than the mean, then we are not doing it right,” Elleithee said to the Voice. “We need to have civil disagreements with one another because in a democracy the competition for ideas, the competition for arguments are supposed to make for better government.”

Flake said he believes that listening to the other side is necessary for progress as well. He encouraged the audience to listen to different political perspectives.

“Change the channel. Get outside of your own news feeds. Expose yourself to differing opinions. Understand that not everybody feels the way that you do,” said Flake. “Realize that this smash mouth politics has never been as sanguineous as we would like to think, but right now it is particularly vitriolic, and I hope that fever cools at some point.”