The Georgetown Institute of Politics and Public Service announced their first in-person class of Fellows in over a year and a half, a group featuring strategists, activists, and correspondents from across the political spectrum, on Aug. 23.

Transgender activist Charlotte Clymer (SFS ’16), the former press secretary for Rapid Response at the Human Rights Campaign and military veteran, starts out the class of six. Joining her on the left is Rebecca Pearcey, the political director and senior advisor for Elizabeth Warren’s 2020 presidential campaign.

Rory Cooper, a Republican strategist who worked as the communications director to former House Majority Leader Eric Cantor (R-VA) and senior staff in the White House Office for Homeland Security under the George W. Bush administration, also joins the list. Also from the right is Ambassador Robert Lighthizer (COL ’69, LAW ’73), a U.S. trade ambassador for the Trump administration who handled the renegotiation of NAFTA.

Rounding out the cohort from the media side are Amna Nawaz, the chief correspondent for PBS NewsHour, and Brian Stelter, the chief media correspondent and host of “Reliable Sources” on CNN.

The Fellows program has introduced a new class every semester since 2015. Last year, the Fellows’ programming was conducted virtually. This semester the GU Politics Fellow Program returns in-person, offering discussion groups, office hours, and student strategy teams for Georgetown students, alumni, and community members to engage with the cohort. For eight weeks, the Fellows will hold weekly, off-the-record discussion groups open to everyone for 90 minutes focused on specific topics. Undergraduate and graduate students are offered one-on-one office hours with the Fellows, as well as the opportunity to apply to serve on the Institute of Politics and Public Service’s Student Strategy Team and closely collaborate with Fellows.

On September 9, the Georgetown Institute of Politics and Public Service is hosting their GU Politics Kickoff and Fellows Fest event, where the community can learn more about the Fellows, their semester plans, and ask questions. 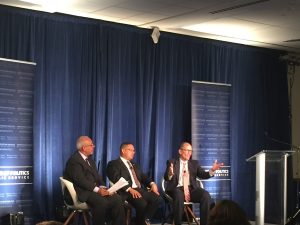