On Oct. 23, Georgetown’s Institute of Politics and Public Service released its Civility Poll, a nationwide survey of 1,000 likely voters as part of GU Politics’ Battleground Poll. The poll revealed that 77 percent of respondents thought national divisions were getting worse and that dialogue was breaking down, presenting only a slight decrease from the last time the poll was conducted back in April.

The poll was conducted by Republican pollster Ed Goeas and Democratic pollster Celinda Lake, who have worked together for nearly 30 years. The civility component was only been integrated into the poll when the pair started working with Georgetown earlier this year, and October marked the second time the pair asked the question.

The poll was conducted between Oct. 6 and Oct. 10, after congressional Democrats opened the impeachment inquiry into President Donald Trump’s dealings with Ukraine. GU Politics plans on continuing the Civility Poll for at least another four years to see how voter’s perceptions of civility changes during and after the upcoming election cycle.

“We all agreed that it would be really interesting to add this new component to it that tracks over time how voters look at and think about civility in politics,” said Mo Elleithee, executive director of GU Politics. “Really [we had] three main questions to ask: How bad do [voters] think it is, who do they blame, and do they truly want it?”

The poll reported that nine out of 10 voters were frustrated at the “uncivil behavior” of many politicians and were tired of politicians working with special interests. However, Democrats and Republicans disagreed on what was the cause of this division.

“In terms of universal agreement on who to blame, it’s not much but social media,” explained Elleithee, saying “Democrats blame the president and Fox News primarily, Republicans blame Democratic congressional leaders and CNN.”

The most interesting part of the poll, according to Elleithee, was the third question, on whether or not voters really did want more bipartisanship from their leaders. Despite 87 percent of voters agreeing that compromise and common ground should be political leaders’ goal, 84 percent also said that they were tired of leaders compromising their values.

“[Voters] say they want more civility, at the same time also want someone who’s going to stand up and fight the other side,” said Elleithee. He added, “It essentially points to a very real potential for another election that’s a race to the bottom, an incredibly negative election” with regard to the lack of electoral backlash against Trump.

While the Civility Poll didn’t directly ask about the ongoing impeachment inquiry, Elleithee believed that voters may still view the question of civility through a partisan lens. “There’s some correlation there to show that the same polarization that drives how voters view politics and how they view impeachment is the same polarization that shows how they view the issue of civility,” Elleithee commented, saying that, “all of this tells me that we are living in a very tribal era.”

Another key finding from the poll was that on average, voters felt that the country was about 67 percent of the way towards a civil war. While this ended up being a slight decrease from April, Elleithee said that was still remarkable how close to violence voters feel the country is. “I think that it gives you a sense of how pessimistic people are about the tenor of our discourse,” he said, adding, “they just feel gross about [it].” 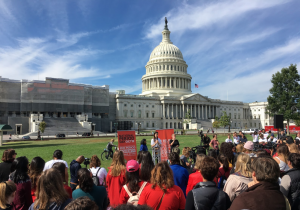