A referendum to recommend the creation of a reconciliation fund to benefit descendants of people enslaved by Georgetown University passed on April 12. The referendum recommends the establishment of a $27.20 fee to be collected from students each semester to be used to benefit the descendants of the 272 slaves sold by Georgetown in 1838 to keep the university financially afloat. The referendum passed by 1,237 votes, the GUSA Election Commission announced at 12:46 am on their Twitter page.

After a 26 hours of voting from Wednesday through Thursday, 57.9 percent of students voted in the election, which also included the election of 18 GUSA senators. Last year, with only the senate election on the ballot, turnout was 23 percent, per the Election Commission.

If accepted by Georgetown’s board of directors, the contribution will be included with other mandatory fees such as students activities fee, added to student tuition each semester. Though it would begin at $27.20 as an acknowledgement of the number of enslaved people sold in 1838, it would be adjusted each year to keep up with inflation. This is the first vote of its kind for an American university to decide whether students should collect and distribute funds to descendants of enslaved people in their school’s past.

The fee will be used to benefit any living descendants of the people sold, many of whom still live in or around Maringouin, Louisiana, near the location where the plantation to which the 272 people were sold in 1838.

The referendum establishes a GU272 Reconciliation Board of Trustees to oversee the use of the funds collected. The board will consist of five descendants elected at a reunion of descendants and five students nominated by the GUSA executive. 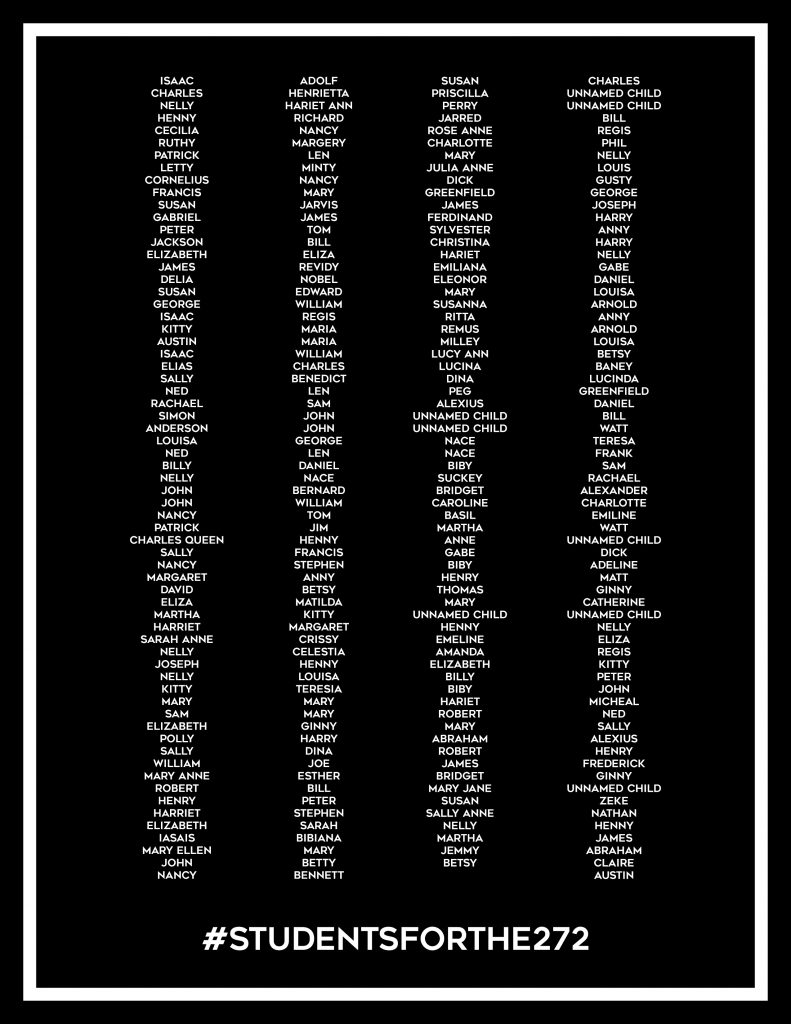 The image members of Students for GU272 used when asked for comment on the results of the referendum. It lists the names of the 272 enslaved people sold in 1838.

Members of Students for GU272, the team that has been campaigning in favor of the referendum, responded with a picture listing all of the names of the enslaved people on the bill of sale from 1838 when asked for comment about the referendum’s passage.

Sen. Sam Dubke (SFS ’21), one of the leaders of the “Vote No” campaign against the referendum, said he did not believe the debate over the issue was finished. “What you saw in this election were a lot of violations of the residential living policies and of the bylaws. They ran a good campaign they got the result that they wanted, but this is not over tonight,” Dubke said. “Numerous complaints were filed with the election commission.”

Aly Pachter (COL ’19), a member of Students for GU272, refuted Dubke’s claim that the advocates of the referendum violated any election bylaws in an email to the Voice. The Election Commission has not yet confirmed that complaints were filed.

Todd Olson, vice president for student affairs, released a statement on the results of the referendum early Friday morning. Olson wrote that the university values the input of the students and their desire to address Georgetown’s history of slavery. “This student referendum provides valuable insight into student perspectives and will help guide our continued engagement with students, faculty and staff, members of the Descendant community, and the Society of Jesus,” the statement read.

Vice chair of the GUSA Election Commission, Justin Rich (SFS ’22) said he believes the high turnout rate for the election may have been driven by the inclusion of the referendum on the ballot. “We had 57.9 percent voter turnout which is the highest that we know of,” he said. “I’m assuming a lot of people voted on the referendum, it was a large part of the campaign seen here on campus but we don’t fully know if it was linked to the larger participation rate.”  The highest turnout rate previously seen was 57 percent in 2012.

A statement from GUSA executives Norman Francis Jr (COL ’20)  and Aleida Olvera (COL ’20) said that the passage of the referendum was a “meaningful step” towards reckoning with the university’s past.

“If implemented by University officials, the measures advanced in this referendum would put Georgetown on the right side of history and constitute the first reparations policy in the nation,” the statement read. “Despite our excitement at this outcome, it is important to emphasize that the results of this vote (as with any student referendum) are non-binding, and the GU272 proposal will require approval by the Georgetown Board of Directors before becoming policy.”

The referendum, which was approved by the GUSA Senate on Feb. 3, has sparked debate on campus throughout the last month as the GU 272 Advocacy team canvassed and hosted town halls to discuss the impact the sale has had on the history of Georgetown.

Despite its passage, the referendum still has to be approved by the university board of trustees. The Senate will verify the election results at their meeting on April 14.

This post will be updated as we receive more information.

Noah Telerski and Margaret Gach contributed to this report.

Our Actions Matter Too: It’s Not Just an Administrative Concern

Kids with half formed brains awash in depression, anxiety, taught by incompetent professors who turned ‘Higher Education’ into ‘lower ed’ and we have come to a new low. Devolution of the human mind with the death of common sense.
Lord, please help these students.