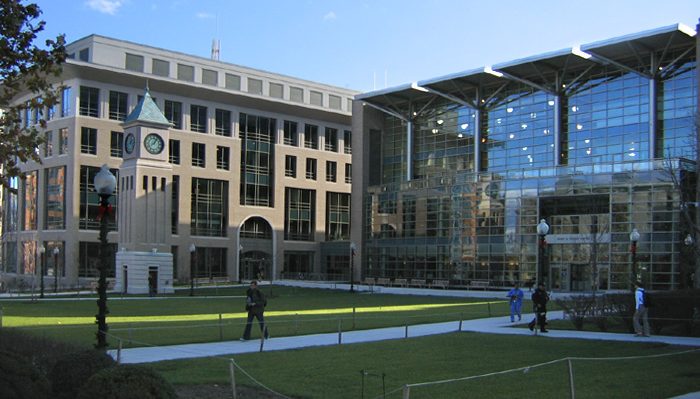 This story was updated on Oct. 16.

Acting Department of Homeland Security Secretary Kevin McAleenan was confronted by protestors and forced to leave an immigration policy conference at the Georgetown University Law Center on Monday.

McAleenan was scheduled to appear as the keynote speaker for the event, which was organized by the Law Center in conjunction with the Migration Policy Institute (MPI) and Catholic Legal Immigration Network. The protests targeted McAleenan’s role in implementing the Trump administration’s immigration enforcement policies, specifically regarding the treatment of children detained at the southern border by Immigration and Customs Enforcement officers.

McAleenan attempted to deliver his speech multiple times over the course of about seven minutes before eventually exiting the conference.

“Georgetown is deeply committed to freedom of speech and expression and we do not limit speech— either on the content of the view or the person expressing the view,” William Treanor, dean of Georgetown Law School, said in a statement. “It is regrettable that the audience did not get to hear from the Secretary and engage in a dialogue.”

Prior to his role as acting secretary, McAleenan served as commissioner of Customs and Border Protection for the Department of Homeland Security. During McAleenan’s tenure, the Trump administration enacted a “zero tolerance” stance on immigration, including the controversial family separation policy. Since then, McAleenan has expressed some regret about his role in its implementation, telling White House officials he would resign if the separation policy was reinstated.

Once McAleenan took to the podium, a group of protestors rose from their seats, carrying large, black banners which read “hate is not normal” and “stand with immigrants.” As he attempted to speak, the protestors read off the names of children who have passed away while in the custody of U.S. Border Patrol.

The protestors were repeatedly asked to leave by Doris Meissner, a panelist and senior fellow of the MPI, but they refused to comply until McAleenan had already left the conference. Based on the audience’s clapping through the event, there appeared to be support both in favor of continuing the speech and in favor of the protesters, according to footage of the event.

Justin Drewer (COL ’23), a member of the Georgetown University College Republicans who also appeared on Fox and Friends, spoke to the Voice about the disruption. “I think that the protestors had very valid concerns,” he said.  “I think it’s valuable having a difference of opinion.”

“I think there are more civil ways that protests and demonstrations can be done where you can get your point across and express your right to free speech,” adding, “without depriving other people of their rights to free speech.”

In an email to the Voice, President of Hoyas for Immigrant Rights Arisaid Gonzalez Porras (COL ’21) gave the protesters her “unconditional support” and called the freedom of speech claim “tiring.” In response to those believing McAleenan should have been allowed to speak, Gonzalez Porras questioned if the same principles were also applied to everyone involved.

McAleenan resigned from his office a few days following the event on Oct. 11, ending his six month tenure as the fourth Homeland Security Secretary to work under the Trump Administration. In a tweet addressing the resignation, the president wrote that McAleenan did an “outstanding job,” and that the two “worked well together.”

David Pekoske, acting deputy secretary of the DHS and top administrator of the Transportation Security Administration, will take on the responsibilities of McAleenan’s former office until Trump appoints a new  secretary.

“If a Cat Were a Dog, It Would Bark”: University Retirement Plan Fee Lawsuit Dismissed in Court