The GUSA Senate passed two pieces of legislation on transportation, one concerning a discounted Capital Bikeshare Program on campus, and one calling for a new D.C. streetcar in Georgetown at their Sept. 15 meeting.

The District Department of Transportation announced in August that Capital Bikeshare would be offering discounted memberships for students, with an annual cost of $25 rather than $85. The university must join the program for GU students to be able to participate, which requires holding one safety course on campus and promoting the program to students via email.

Senators highlighted the low cost of the program, and unanimously voted in support of the resolution.

The second piece of legislation calls on the Georgetown administration and D.C. City Council to support plans for a streetcar that would connect the neighborhood with downtown, Union Station, and Anacostia.

The route was initially proposed in the D.C. City Council’s master plan in 2017 and has began running from Anacostia to Union Station, yet no progress has been made on the plans for the Georgetown route

Sens. Jessica Richards (COL ’20) and Joshua Marin-Mora (SFS ’21), both of whom introduced the resolution, noted the specific benefits of a streetcar such as the use of electric power and traditionally higher ridership than buses. Streetcars have also been shown to encourage economic development, although that result is not consistent.

Sen. Harrison Nugent (SFS ’20) brought up the cost of the proposed street car, which would cost the city $200 million, and suggested the money could be better used to improve bus routes or create a metro stop in Georgetown. The operating expense per rider mile for the streetcar in 2016 was $22.95, whereas the expense for buses was $3.19.

Speaking in favor of the resolution, Sen. Peter Lee Hamilton (COL ’20) said the resolution could be utilized by local officials and the Advisory Neighborhood Commission in recognizing student support for the initiative. “I think that it’s a good messaging tool and giving them that tool isn’t going to cause any harm,” Hamilton said.

As part of a continuous effort to improve the workings of the Senate, the body unanimously amended the bylaws to consolidate the three standing policy committees— University, Campus, and Student —into one Policy and Advocacy committee. The committee would be comprised of a Chair, Vice-chair, and Senate Policy Chairs, each of which are responsible for at least one policy coalition.

The committee would be responsible for oversight of all of the 24 policy coalitions, from accessibility to free speech to socioeconomic advocacy. Each coalition will be overseen by Executive and Senate Policy Chairs, who will have equal rights and responsibilities.

Sen. Leo Teixeira (COL ’21), who helped draft the legislation, said that this format would streamline policy processes and create a more efficient working environment. “This will fit in better to a new productive Senate-Executive relationship,” Teixeira said.

Sen. Nugent also motioned to break the rules to introduce a resolution to abolish GUSA Fund, a discretionary fund run by the executive. The Senate chose to hold off debate until the freshman class is elected.

The Senate also confirmed Sen. Zev Burton (SFS ’22), who was serving as the Communications Vice-chair as the Communications Chair. The position of chair was vacated last week when Nugent was elected as transition Finance and Appropriations chair, a position responsible for allocating the student activities fee to clubs and organizations on campus. 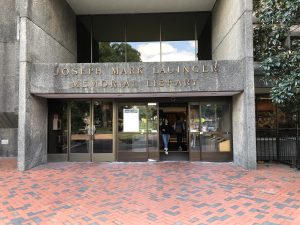 Every Study Spot on Campus Ranked