Georgetown submitted its comment to the Department of Education on Wednesday on the department’s proposed changes to Title IX enforcement. The comment was largely critical of the changes on several fronts, including the changed standards of accountability for educational institutions regarding sexual assault and the process of adjudicating complaints.

“Consistent with our core values, Georgetown supports regulations that hold institutions and individuals accountable, encourage reporting, and allow institutions to address the broad range of sexual misconduct that impacts their communities before an individual’s access to education is effectively  denied, regardless of where the conduct occurred,” university President John DeGioia wrote in the letter. “As laid out more fully below, Georgetown is concerned that, in many respects, the proposed regulations do not succeed in promoting these goals.”

DeGioia also criticized an “overly legalistic” complaint process, which he argued would discourage reporting and create inequalities in the system of Title IX enforcement.

Since the Department of Education opened the public comment period for these proposed changes, the university hosted 11 listening sessions, which DeGioia credited for incorporating student perspective into the letter. Students Taking Action Against Interpersonal Violence also hosted a town hall Jan. 15 providing a forum for students to voice opinions on the changes.

The university published a draft of the letter on Jan. 27 for comment from students. 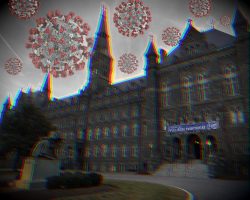