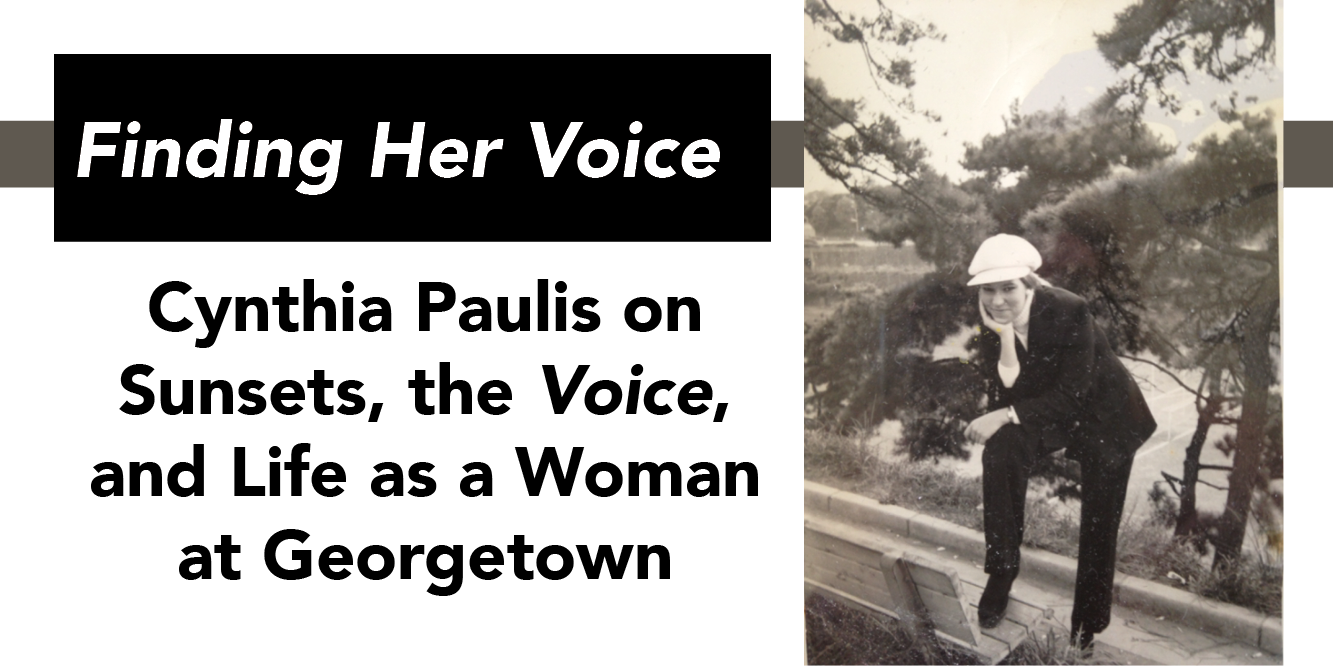 Every evening, as the sun sets over the oceanside near her home in Massapequa Park, N.Y., Cynthia Paulis (MSB ’74) rides her bike along the beach. As the sky turns from pink to orange to deep black, Paulis appreciates the opportunity to slow down and enjoy the world around her.

In the 44 years since she graduated from Georgetown, Paulis has not had much time to relax. She has been a Lieutenant Commander in the United States Public Health Service as a military physician, learned to fly a plane, and published an essay in Gloria Gaynor’s 2013 book We Will Survive. But before she did any of that, Paulis was one of the first members of the Voice.

She remembers the Voice for the people she worked with.

“We had a very amazing group of people who were so talented,” Paulis said. “Really incredible people came out of that paper.”

While Paulis was at Georgetown, she was one of few women in the McDonough School of Business. She believes that Georgetown today is almost unrecognizable compared to the Georgetown she attended, recalling moments of blatant sexism.

“It’s a whole different world. There weren’t a whole lot of women on campus,” Paulis said. “It was tough, and the professors weren’t always nice. I remember a professor asked all the girls to sit in the front row and cross their legs. And he said ‘Now that the gates of hell are closed, we can continue with class.’”

Georgetown did not become fully coed until 1969, when the College began accepting women. While Paulis graduated amongst only a handful of other women in 1974, more than 3,800 undergraduates at Georgetown in October 2017 were female. Her undergraduate years felt lonely at times, but she thinks that the experience of being one of the first women in the business school helped form who she is today.

“We kind of went through that whole era where we had to fight our way up, so I have a lot of battle scars,” Paulis said. “We weren’t really welcome on campus.”

Paulis only recalls one other woman involved in the Voice in its early years but says that she always felt welcome in the publication’s office. “They weren’t sexist. They were happy that I wanted to write,” Paulis said of the men involved in the magazine. “They made me feel welcome.”

Paulis’ undergraduate years made her used to standing out in a crowd of men. During her time at A.T. Still University’s Kirksville College of Osteopathic Medicine, there were only 22 women in a class of 135. She was elected class president, the first woman in the school’s history to hold the position.

After medical school, Paulis worked for the Public Health Service in Ada, Oklahoma, where she provided medical care for rural communities. She helped victims of Hurricane Katrina and tornadoes in Oklahoma and volunteered for the Red Cross after Hurricane Sandy. Paulis never lost her passion for writing, however, and returned to it after a 2009 car accident four blocks from her home left her injured. She cites the accident as the beginning of her career in writing, saying that it made her consider what mattered to her.

“I write about my experiences, what I see and what I feel,” Paulis said. “I just learned to be bold and be brave and just take a chance. You can’t just wait for something to happen, you have to get out there.”

Paulis has written for Patch, the Syosset Jericho Tribune, and the Long Island Tribune. In 2013, her essay about Hurricane Sandy was published in Gloria Gaynor’s We Will Survive. Paulis has taken writing classes and written travel, medical, social, and political articles but feels that the most important thing she can cover is the good going on in the world.

Paulis also said that her work as a writer has given her the opportunity to experience new things. “My writing took me to all these different places,” Paulis said. “I got to meet all these wonderful people.”

After our interview, Paulis sent me a picture of the sun setting over the park near her home. The sky is a warm orange, and the ocean in the background is still and calm. A lot has changed since Paulis was an undergraduate at Georgetown, but it’s still the same sun setting over the Hilltop and Long Island.