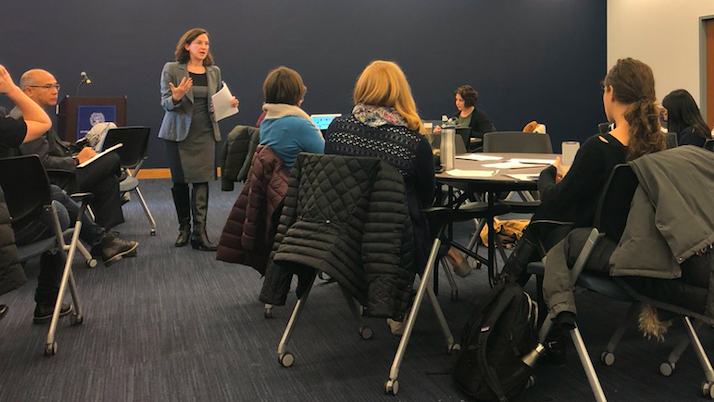 Two of three scheduled listening sessions on the Department of Education’s proposed changes to Title IX regulations have been hosted by the university, with the final taking place tonight.

Maria Cornell (SFS ’20), a member of Students Taking Action against Interpersonal Violence (STAIV) who attended the Dec. 3 session and plans to attend on Dec. 10, wrote in an email to the Voice that Secretary of Education Betsy DeVos’ proposals are a setback in the fight against gender discrimination.

“Her new proposals will dissuade even more survivors from seeking institutional support and will limit schools, universities, and students even further in their ability to combat interpersonal violence on and off campus,” Cornell wrote.

The Dec. 6 session, held in the Healey Family Student Center Social Room and attended by about 60 people, was moderated by Catherine Guttman-McCabe, a partner with the Potomac Law group who specializes in employment and education law. She fielded questions and comments from students, faculty, and staff.

Feedback on the proposed regulations, which would redefine sexual harassment and narrow the circumstances under which a university has a responsibility to begin Title IX investigations, was overwhelmingly negative.

Students and faculty argued that the newly proposed definition of sexual harassment, which would require conduct to be “severe,” “pervasive,” and “objectively offensive,” is too narrow. Under previous guidance, conduct only had to be severe or pervasive.

Under the proposed regulations, universities would only have a responsibility to intervene in on-campus incidents. Students urged the university to continue to take responsibility for student conduct off-campus, including conduct concerning graduate students and students studying abroad.

Community members also expressed disappointment in how the listening sessions themselves were conducted. Susu Zhao (COL ’19), one of the STAIV member who recently delivered a letter to University President John DeGioia’s office in opposition to the proposed changes, said that the administration has not taken the sessions seriously.

“The administrators were all there, but they were doodling, they were falling asleep,” Zhao said of the Dec. 3 session.

Cornell also felt that administrators have not taken the necessary steps to respond to the community. “Quite frankly, there was no dialogue between students and the administration,” she wrote. “Students need transparency during this process, and I hope to see more two-way communication moving forward.”

Larry Huang (COL ’19), a student representative on the Sexual Assault and Misconduct Advisory Committee, said that while administrators seemed more engaged during the Dec. 6 session, the listening sessions are not a sufficient response on their own.

“I think that they are a good start, but I think students are concerned that they won’t be followed through,” Huang said.

The sessions were announced in a Nov. 30 email to the campus community from Kilkenny and Olson that stated the university’s intention to gather community feedback before submitting an official comment on the proposed changes.

“As the University considers which portions of the proposed rules to address, and in what manner, we invite you to share your thoughts and reflections,” the email read.

Since announcing the original three listening sessions, Kilkenny and Olson have announced plans for a fourth session for faculty and staff. They have also promised to make notes from all four sessions public by January 2019.

“I’m hoping that next Monday will just have more answers,” Zhao said.

Huang hopes that the university will follow up the listening sessions with a concrete plan of action. “I’d like to see firm commitments to engage with students on the drafting and reviewing of the comment, and to see the university commit to continuing to engage with students at large to reevaluate our current Title IX policies as well,” Huang said

He also believes that the administration needs to engage in more dialogue with the community to effectively address these concerns.

“Until the University incorporates students at every step of the way, the problem is not going to go away,” Huang said. ”The system isn’t working, and if they think the system is going to fix itself or that students will go away until the system is fixed, they’re wrong.”