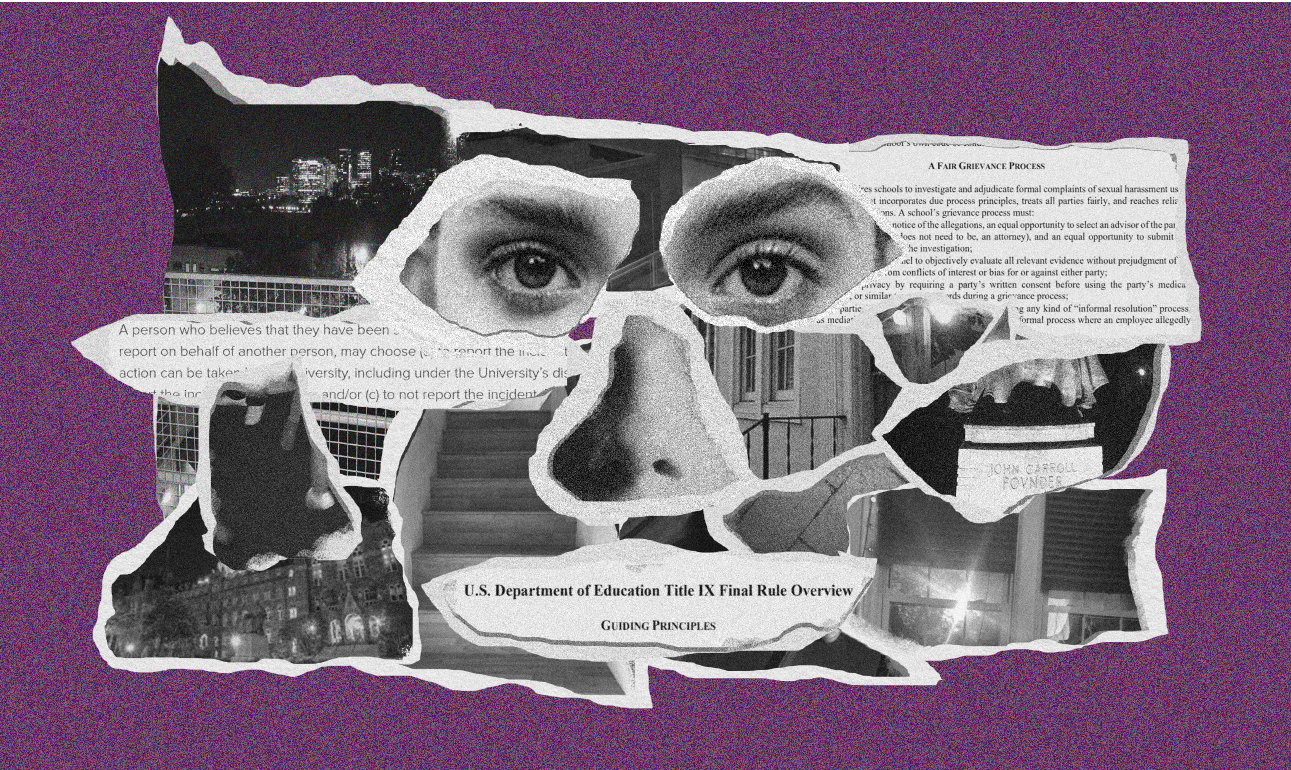 One out of every three women. I have always found this statistic challenging to fully comprehend—and even more difficult to personally apply. I knew sexual assault happened to a lot of people — female, male, and non-binary — but for some reason, I thought it would never impact me.

So when I look back to the night it happened to me in the fall of my freshman year, I feel ridiculously naïve. Me? Alone with him? In his room? We were going to watch a movie. I thought my expectations were completely clear — I did not want anything physical.

And then it happens. I say I am uncomfortable. I protest, but he does not listen. I push his hands away; they return. They lift up my shirt. My stomach tightens. I can’t breathe. I want to throw up. Get away. Get away right now. Get the fuck away from me.

That night, I became one of the one-in-three women who has experienced sexual assault or coercion—without even realizing it. Yet despite our prevalence and the gravity of our circumstances, policymakers continue to neither recognize nor support survivors of sexual assault.

On May 6, Education Secretary Betsy DeVos announced new Title IX policies, changing university obligations to respond to sexual misconduct. Though Title IX was originally created as part of the Educational Amendments of 1972 to prevent sex-based discrimination on college campuses, the new policy changes do just the opposite. The new regulations increase the due process rights of students accused of sexual misconduct, allowing them to view all evidence collected against them and granting attorneys the power to cross-examine accusers during in-person hearings.

The new policies also narrow the scope of university obligations to respond to accusations of sexual violence. Universities, for instance, are no longer obligated to respond to assault that occurs in any off-campus locations not affiliated with the university.

When my assault occurred, I was off-campus. Only about eight percent of all sexual assault at educational institutions occurs on school property. He thanked me for being willing to go outside my comfort zone, as if his ‘thanks’ made it okay. No, I thought. I was not willing. He might claim that, but it could not be further from the truth. When he finally let go of me, I ran out of the room.

After I got back to campus, I dropped my coat off in my room. My roommate was there with a friend. They asked how I was. “Fine,” I said. “I’m just fine.” I avoided eye contact. They knew me too well and I was afraid of what questions they might ask, and my inability to answer them.

I grabbed my towels and some fresh clothes, and found solace standing in the silent, empty shower room. And then it hit me. A sob I did not know I was holding in burst out. I stood there and cried.

As the weeks passed, it never occurred to me to tell anyone or seek help. It was the first year of college. I worried about being a burden to my new friends with that type of information. And there was no way I would recount that mortifying night to my family, especially over the phone. My reaction sobbing in the shower room should have said it all— something horrible had happened, but at the time I did not really know what assault was and what I should do.

I decided that I’d just keep it all under wraps; it was just an awful, naïve and stupid experience no one ever needed to know about. I buried it somewhere deep, until the question kept resurfacing months later: what actually happened back there?

My worst fears were confirmed spring of my freshman year when I researched the official definitions of sexual harassment and assault. I was one of the one-in-three-women. In a way, I found some strength in the clarity. That night was one of the worst moments of my life, but at least I had learned that my reactions were legitimate and I was not just being overly sensitive.

Every night since my assault, I have tossed and turned in my bed, unsure of whether to say something. But now I must because I fear the day is fast approaching when the Department of Education’s new Title IX policies will make it even harder for survivors like myself to come forward.

Due process is important, but that process cannot begin if survivors are too afraid to speak. After that night, I could not look my perpetrator in the eye. How, then, could I be expected to undergo cross-examination by his attorney in front of him? If survivors are afraid for their bodily safety, forcing them to face their assaulter to pursue justice dismantles any chance they have to feel safe. Given that I was also off-campus that night, the new policies would mean the university had no responsibility in helping me bring my assaulter to court.

University Title IX offices are also no longer required to investigate all allegations into non-consensual conduct of a sexual nature. Unlike under the Obama administration, they are only required to intervene in cases of “unwelcome conduct on the basis of sex that is so severe, pervasive and objectively offensive that it denies a person access to the school’s education program or activity.” How damaged do policymakers need me to be before I can request help from my university? How physically harmed do I need to be to seek justice? How do they quantify the pain of assault? Every incident of sexual assault is different and varies in its degree of severity. Distinguishing assault as only sexual misconduct so severe to force a student out of the university discounts the specific testimonies of thousands of survivors.

The new Title IX policies also tighten the standards of requisite evidence for prosecution, making it far harder for students to pursue legal justice against their assaulters. Prior to DeVos’ guidelines, universities followed a policy of “preponderance of the evidence,” meaning that evidence would more likely than not prove a Title IX infraction. Considering that sexual assault cases often contain limited to no physical evidence, this policy allowed survivors to still take their assaulters to court. Under the new policies, universities are allowed to follow a new standard, which requires “clear and convincing proof” that assault has taken place.

The administrative incentives provided by this second standard — avoiding lawsuits and reducing the number of reported Title IX violations — are enough to push universities to adopt these harmful policies, which inevitably will silence individuals who hope to report misconduct. The Department of Education estimates that U.S. universities will now save up to $456 million in sexual assault investigations.

If it was hard for survivors to seek justice before, it feels impossible now.

Being a survivor is now a part of my identity. I cannot change that fact. It took me a long time to acknowledge this painful reality. People who have experienced sexual assault are termed survivors for a reason. They hurt. They struggle. Maybe over time, they begin to heal, but it is no easy process, partially due to the social and institutional barriers that prevent people from coming forward. But the new Title IX policies do not acknowledge my identity as a survivor. They force me into victimhood.

Survivors should not be punished for their strength.  No, I did not need to go on academic leave. No, I did not need to go to the hospital. Does it qualify me less for pursuing disciplinary action against my assaulter? Assault cannot be measured by universal standards. Each situation is highly nuanced and no survivor responds in the same way. Some seek therapy, temporarily suspend their education, or seek legal justice. Others will continue on with their daily lives in silence. Either way, survivors deserve clear paths to find legal reprieve. New Title IX policies should not exclude any individual from seeking help based on the extremity of their personal reaction.

When I finally told people, many months later, I realized that we still live in a society where, no matter the conditions of assault, survivors’ stories are still suspect. People were sympathetic, yet I was taken aback by how quick they were to play the devil’s advocate. “I’m sorry, but you were alone with him. You should have known he expected more.”

“You should have known.” The phrase makes me shrink. It makes me want to hide.

Yes. Maybe I should have known. But since when is trust a crime?

The new Title IX policies feel personal. They make me ashamed of who I am. They invalidate my experience as undeserving of help. They fail to recognize the complexities of my story.

While the #MeToo movement pushed the rights of survivors a step forward, we are falling two steps back. The new Title IX laws recreate a pre-MeToo movement world where survivors’ testimonies will always be doubted. A society where assaulters can get away with it even more easily than they already do. A world that says it has no place for survivors.

It terrifies me, now, to admit that I am one of the one-in-three women, to rehash that night and to put myself back in a position of vulnerability. But I am so sick and tired of feeling embarrassed and afraid, and I will not let the new policies continue cycles of shame for survivors.

To seek help as a survivor, consult the following resources.