Sister Simone Campbell, executive director of NETWORK Lobby for Catholic Social Justice, discussed the public element of spirituality on Wednesday, Jan. 31, 2018 in Dahlgren Chapel. The event, titled “From the Desert to the Center of Life: Spirituality’s Public Consequence,” was the latest installment in the Dahlgren Chapel Sacred Lecture Series.

The series honors the Jesuit tradition of carrying on intellectual discussions in churches when they are not being used for worship. The chapel has played host to speakers such as Cardinal Donald Wuerl, archbishop of Washington, and Pulitzer Prize-nominated author Alice McDermott.

Campbell led the “Nuns on the Bus” social justice tours, in which protesters rode around the country, stopping for rallies and speeches along the way every year since 2012. She spoke about traveling the country and the spiritual lessons she learned from her experiences.

“When I grew up, I really thought my spiritual life was for me,” said Campbell. “What I have learned from my reflection and engagement is that I believe that all of our spiritualities are public property.”

Campbell elaborated that she believed that one could not truly care for others without opening one’s heart to them and, consequently, having it broken.

“The measure of a Christian is how often you have gotten your heart broken,” she said.

Campbell told stories of people she encountered who had broken her heart. Ten-year-old twins Matt and Mark, who had been expelled from their school for fighting with a bully, were the sole caretakers of their mother, bedridden with multiple sclerosis and diabetes. When Campbell visited their youth center, Mark wanted to show her the beauty of the new painted tile in a recently remodeled bathroom there.

“A ten year old, taking care of his mom, fighting for his brother, and seeing beauty? What else do you need to know that the spirit is alive?,” said Campbell. “The only way to hope is with a broken heart, because if I’m busy protecting myself, I’m not engaged with the community.”

She also spoke about a group of black mothers in St. Louis, Missouri, who, in trying to figure out how to make a difference in the racial tensions plaguing the city engaged with white mothers to try to tell them about the black experience.

Campbell explained how one woman sat her 10-year-old son down to tell him how to behave when he was confronted by police. “He asked her, ‘mommy, how long is this going to go on?,” said Campbell. “She replied, ‘At the rate we’re going, the rest of your life.’”

“Who are we that our kids need to worry about dying?,” said Campbell

Campbell closed her speech with a reading of her poem, “Living Waters,” a reflection on struggle and resistance through spirituality. She then took audience questions, leading to a profession of her personal “heresy,” her belief that women can and should be ordained.

“We can have the institutional fight,” said Campbell. “But let’s just do, and definitions will catch up.” 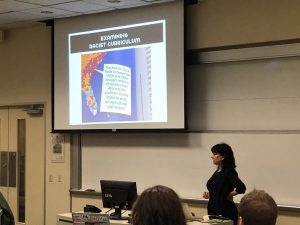