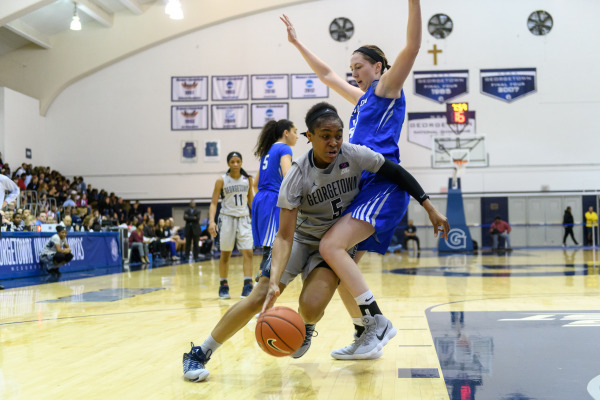 It was all Creighton to begin with, as senior guard Sydney Lamberty hit two threes and senior guard Myah Mellman added another, forcing Georgetown head coach James Howard to call an early timeout. Faber would add another triple to open the game on a 12-0 run before Burton steadied the ship with five quick points to get the Hoyas into a rhythm. Georgetown spent the rest of the first quarter whittling away at the Bluejays lead, finishing the quarter on a 9-0 run of their own, capped off by White’s steal and layup to give the Hoyas a 20-19 lead.

“We needed that, first of all, to kind of wake up,” Petke said. “As soon as we saw we had to step it up, and we made a couple of adjustments that led us to get the run and finish the first quarter with the lead.”

“It was DiDi Burton’s five points right off the bat that really helped us,” Howard said. “We start to play from there, and now we kinda settled in, and from there, we’re okay.”

Of Creighton’s 12 shots in the first period, 11 were threes, and the Bluejays maintained the a similar shot distribution going in the second quarter. Creighton shot 50 percent from beyond the arc in the second, but converted only one of five shots from inside the arc, which would be, the Bluejays’ first and only two-pointer in the half. In addition, Petke dominated the second, repeatedly getting her shots to fall from the paint and leading the second quarter effort with eight points. An 8-0 run put Georgetown up 12 with two minutes remaining in the half, but Burton couldn’t finish a layup in transition, springboarding the Bluejays into an 8-0 run of their own, with Faber hitting a late three to end the half four points behind.

Creighton’s shooting went cold in the third quarter, and the Bluejays had to rely on making it to the free throw line to get their points. Faber and year, position Jaylyn Agnew missing crucial free throws. White and Burton made their way to line at the end of the quarter and calmly made all of their free throws. The Hoyas were,perfect from the line on the day, shooting 12-12.

During the fourth quarter, the Hoyas’ lead ballooned to as large as 16 points. Georgetown repeatedly found its guards, more often than not Smith, slashing to the basket for easy points. With just two minutes left, the Hoyas led by 13 points and twould use nearly every one of those, holding onto a slim three point victory after a nervy finish. Elger’s 11 fourth quarter points were too little, too late for the Bluejays, who finally caught fire at the end of the period, aided by sloppy execution in the final two minutes by the Hoyas.

“I don’t think we managed the clock very well,” Howard said. “I thought our passing and our decision making wasn’t good down there, and then you’ve gotta hold on for the win.”

With the win, Georgetown has now split the season series with each of the top three teams in the Big East. They finish the season with Senior Day against Providence on Sunday. Tip-off is scheduled for 2:00 p.m. and will be streamed on the Big East Digital Network. Follow @GUVoiceSports in Twitter for live updates and breaking news. 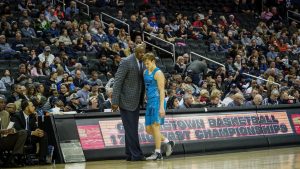