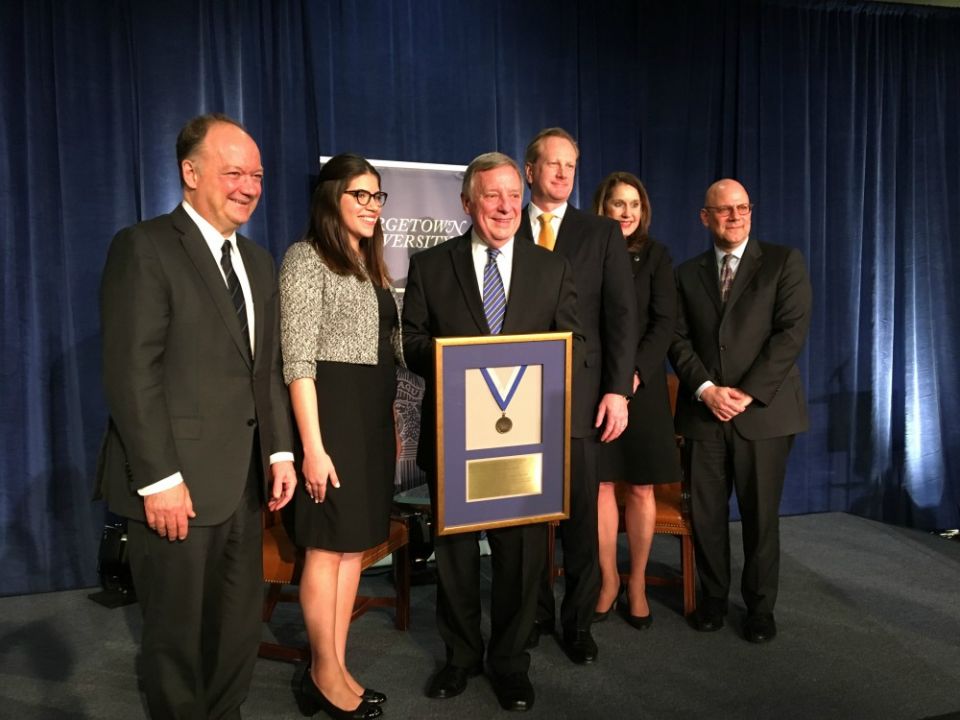 The award, named for the university’s 46th president, Timothy S. Healy, is conferred upon an alumnus who has demonstrated outstanding public service in humanitarian issues.

“Throughout his career, Senator Durbin has modeled civility and bipartisanship, and he has sought to ensure that we live out and live up to the values of our nation,” DeGioia said. “He has contributed to important legislation related to public health, banning smoking on commercial airline flights, on childhood health issues, global funding for HIV/AIDS, and healthcare research related to our women and men in our armed forces.”

A graduate of both the SFS and the Law Center, Durbin credits Georgetown’s emphasis on economics, history, government and foreign language as crucial in preparing him for the job he does today.  “Georgetown played such a critical role in educating me in so many different ways,” Durbin said.

Christina Velazquez (SFS ‘17), a beneficiary of the DREAM Act, expressed her gratitude to Durbin for his commitment to immigration reform.

“I stand here today to honor Senator Durbin, and frankly, I do not know if I would be here had it not been for his courage to fight relentlessly for DREAMers,” Velazquez said. “Today, my life is uncertain. But what I do know is that the experiences and community Georgetown gave me can never be taken away, regardless of where I go or what I do.”

“As Hoyas, we embrace the idea of being men and women for others, a choice we make out of our desire to leave the world a better place. This often means committing to something that has not been done before, taking a stand when others are silent and having the courage to pave the path for those that follow,” Velazquez said.

The conversation turned to the issue of gun violence, especially in light of the recent shooting in Parkland, Fl. Durbin said that the primary reason that Congress could not pass effective gun violence prevention measures was because of the influence of the National Rifle Association (NRA). Durbin has experienced the formidable influence of the NRA firsthand. When he was still a congressman, he faced a tough re-election race where he nearly lost due to his refusal to support NRA-backed measures.

“It is a tough issue and I get it. It scared the hell out of me. I still continue to vote against the NRA, but I knew it was a risky thing to do,” Durbin said.

Durbin admired the bravery of the young activists from Parkland, students who survived the shooting and are now pushing gun violence to the forefront of the national political agenda.

“They have brought into this debate something that has been missing,” Durbin said.  “They are pretty darn good… They are articulate, they know exactly where they’re going to.”

According to Durbin, Republican leaders are losing their interest in gun law reform with each passing day. He cautioned against feeling too optimistic about the president’s potential cooperation with gun control measures. The disconnect between Trump’s actions and words, concern the senator. Following the Parkland shooting, the president seemed to support Democratic proposals for stronger gun control measures, but he has recently backtracked on these statements.

“I just don’t think his word is reliable,” Durbin said.

Durbin met with the president on Jan. 9 to discuss the future of DACA and how to protect Dreamers living in the United States. Trump told Durbin, “Send me a bill and I’ll sign.” Durbin said the president never followed through on his promise.

Despite the graveness of the many issues facing the nation today, Durbin ended the evening on a note of optimism to students and faculty in the audience.

“I just encourage all of you. Don’t be discouraged. We need you, more than ever,” Durbin said. “Your energy, your idealism, the values that you’re picking up here at Georgetown, can make a difference in this nation and in this world. In some small way, I hope I have.”

Meet Georgetown’s Board of Directors