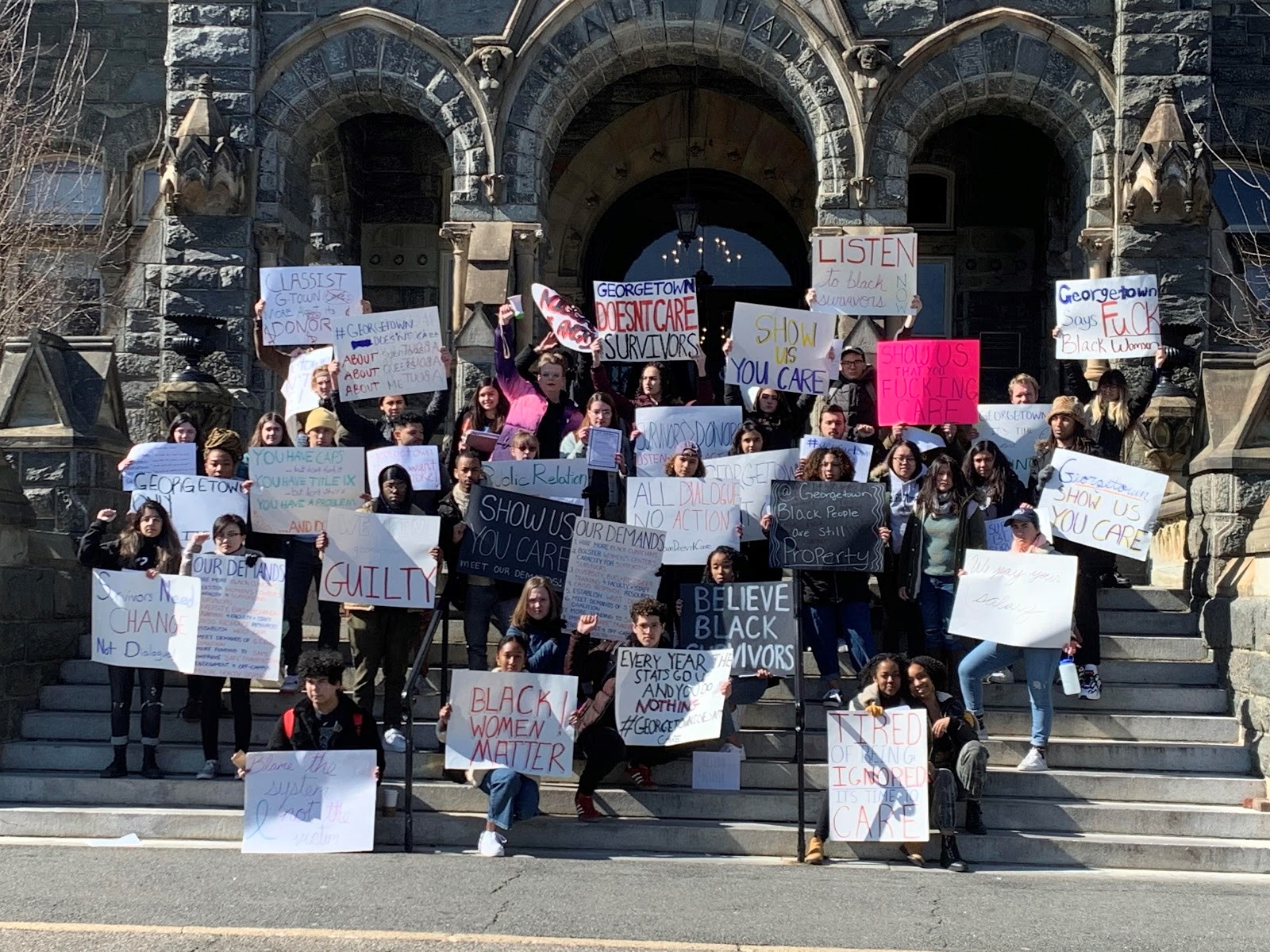 The Black Survivors Coalition gathered in Red Square on Feb. 21 to protest the administration’s inadequate response to their list of demands dropped off at university President John DeGioia’s office on Jan. 27. A week of sit-ins in front of DeGioia’s office in Healy Hall began on Feb. 24.

The Black Survivors Coalition was formed in the fall of 2019 as a successor to the S.T.O.P. Coalition. Both coalitions include black women and femme survivors of sexual assault who want to improve on-campus resources for survivors.

“The Black Survivors Coalition is a coalition of people on campus, primarily GU black women or black non-binary folks or anyone in that spectrum who has experienced some kind of sexual assault or they just want to fight for the cause,” Ace Frazier (MSB ’23), a member of the coalition, said. “We are here to show that we matter and are demanding change from the university.”

The rally included speeches by members of the Black Student Coalition and individuals from other on-campus communities. “We are going to make Georgetown fucking care,”  Norman Francis Jr. (COL ’20), outgoing GUSA president, said.

The Georgetown administration released a statement on Jan. 27 in response to the coalition’s demands. However, the response was not a public message to the Georgetown community as the letter stipulated. Instead, the administration emailed it to individuals on the executive boards of various black on-campus organizations.

“The response was not the response that we asked for. We asked for it to be public and a real response, and it was neither of those things. Also, it was not even sent to us,” Kayla Friedland (COL ’22) said.

One speech at the rally was given by Sara Collina, an adjunct lecturer in the Women and Gender Studies Department. In an email to the Voice, Collina encouraged all members of the Georgetown community to advocate for student rights. “I think every member of our community should be finding ways to make this most intellectually exciting, loving, kind and inclusive campus in the world—whatever that looks like for them,” Collina wrote.

“I don’t have the lived experience, the perspective, or even detailed knowledge about current policies to understand what black and brown students, especially female-identified students, are experiencing,” she wrote. “But I know their perspective and life experiences need to be at the center of the conversation.”

After rallying in Red Square, protesters chanted on their way to DeGioia’s office, where they alerted staff members that a sit-in would go from 9 a.m. to midnight on Feb. 24. “There’s no excuses for student’s rights abuses,” students chanted in front of groups of touring prospective students.

Within the first thirty minutes of the Monday sit-in, DeGioia came out of his office to talk with those in attendance. When GUPD officers arrived on the scene, President DeGioia waved them away.

“It is important for us to ensure that you know what I know in terms of what steps we are taking to try to substantively address the concerns that you brought to our attention,” DeGioia said. Students told their personal testimonies of sexual assault on campus, and expressed frustration about the administration’s response. 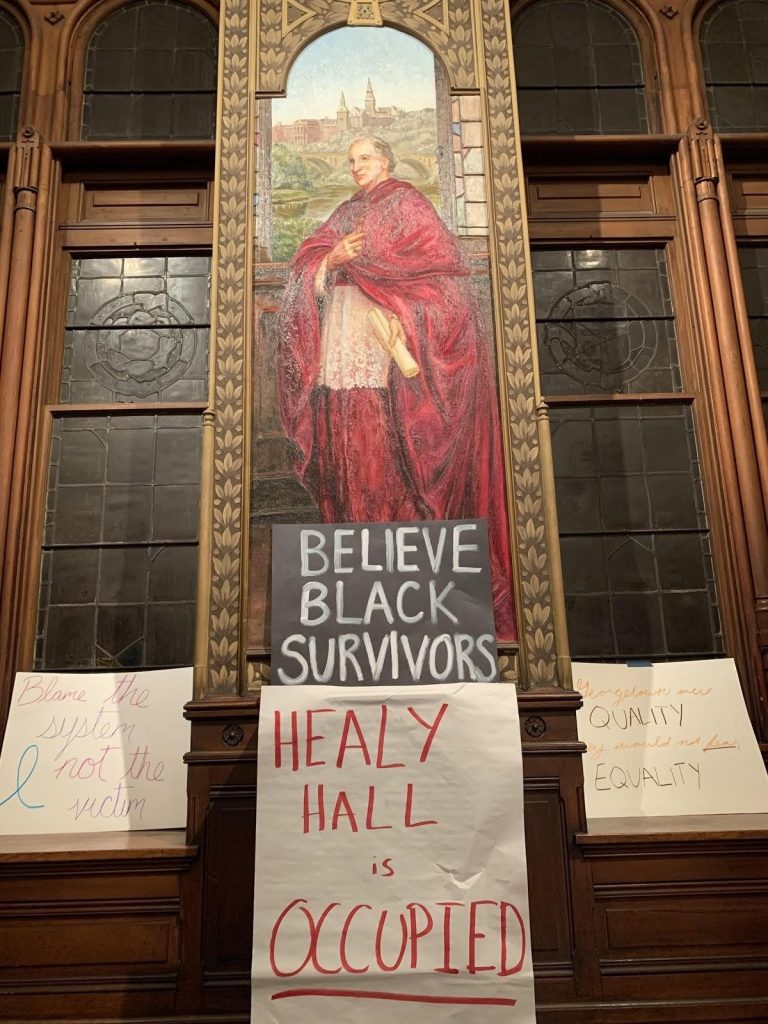 DeGioia told the coalition that he would arrange for administrators to meet with the protesters, including Vice President of Student Affairs Todd Olson, Vice President of Institutional Diversity and Equity Rosemary Kilkenny, Assistant Director for Sexual Assault Response and Prevention Services Jennifer Wiggins, Amena Johnson from the LGBTQ Resource Center, and new Title IX and Civil Rights Investigator Sarah Onori. While the administration scheduled an initial meeting for 3 p.m., protesters expressed disappointment that these administrators were over fifteen minutes late.

Administrators and protesters discussed timelines for each of the demands, including hiring more CAPS clinicians of color. The administration announced that Latasha Smith, a black clinician from Vassar College, will begin at CAPS this fall.

The university is also in the process of hiring another black woman clinician and a male clinician of color. These professionals will begin at Georgetown after they have finished the school year at their respective institutions.

“We know we need to do a broadcast email to the entire community this week,” Olson said. “We also talked about the idea of sending regular updates to the community,” he added.

The conversation also addressed student concerns with GUPD as an on-campus resource. Many students described negative experiences with GUPD and argued that students may feel uncomfortable being escorted home by a GUPD officer.

After meeting with administrators, students were frustrated with non-answers but appreciated the opportunity to directly discuss their demands. “I am always disappointed talking with administrators,” Chad Gasman (COL ’20) said. “But I think that yesterday was a unique and productive conversation because they had to listen to us.”

At the end of the first day of sitting in, the mood was positive among student activists. “I think people feel empowered in a really unique way because we are able to finally tell the administration all the things we have been failed on,” Gasman said. “People finally have the power back from administrators and are using it properly.”

The sit-in is ongoing and protesters will continue to meet in front of President DeGioia’s office until the administration adequately responds to demands. On Feb. 25, students will meet with Georgetown College Dean Christopher Celenza to discuss the creation of a Woman and Gender Studies Department, Phil Meilman, director of CAPS, and Jay Gruber, chief of GUPD.

The coalition has been supported by GU Pride, who have postponed a Racism and White Allyship event until the sit-in is over to allow its members to remain at the sit-in. The movement has also been supported by #NOTAGAINSTSU, an organization at Syracuse University which fights against white supremacy on university campuses. “#GeorgetownDoesntCare stands in full solidarity with #NOTAGAINSTSU and stresses the need to build coalitions between marginalized activists across the country to support one another,” a public statement from #NOTAGAINSTSU said.

Protesters will continue daily sit-ins until the university fully responds to each of the coalition’s demands, with a timeline of future steps. “You keep stressing dialogues. But we are talking and nothing is happening,” Friedland said.

Annemarie Cuccia and Katherine Randolph contributed to this report. 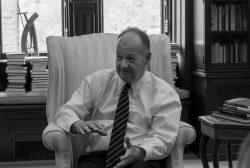 Georgetown Rewind: A Conversation with DeGioia 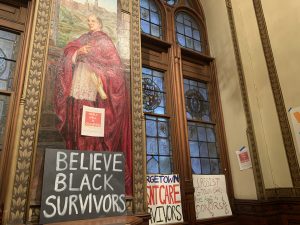