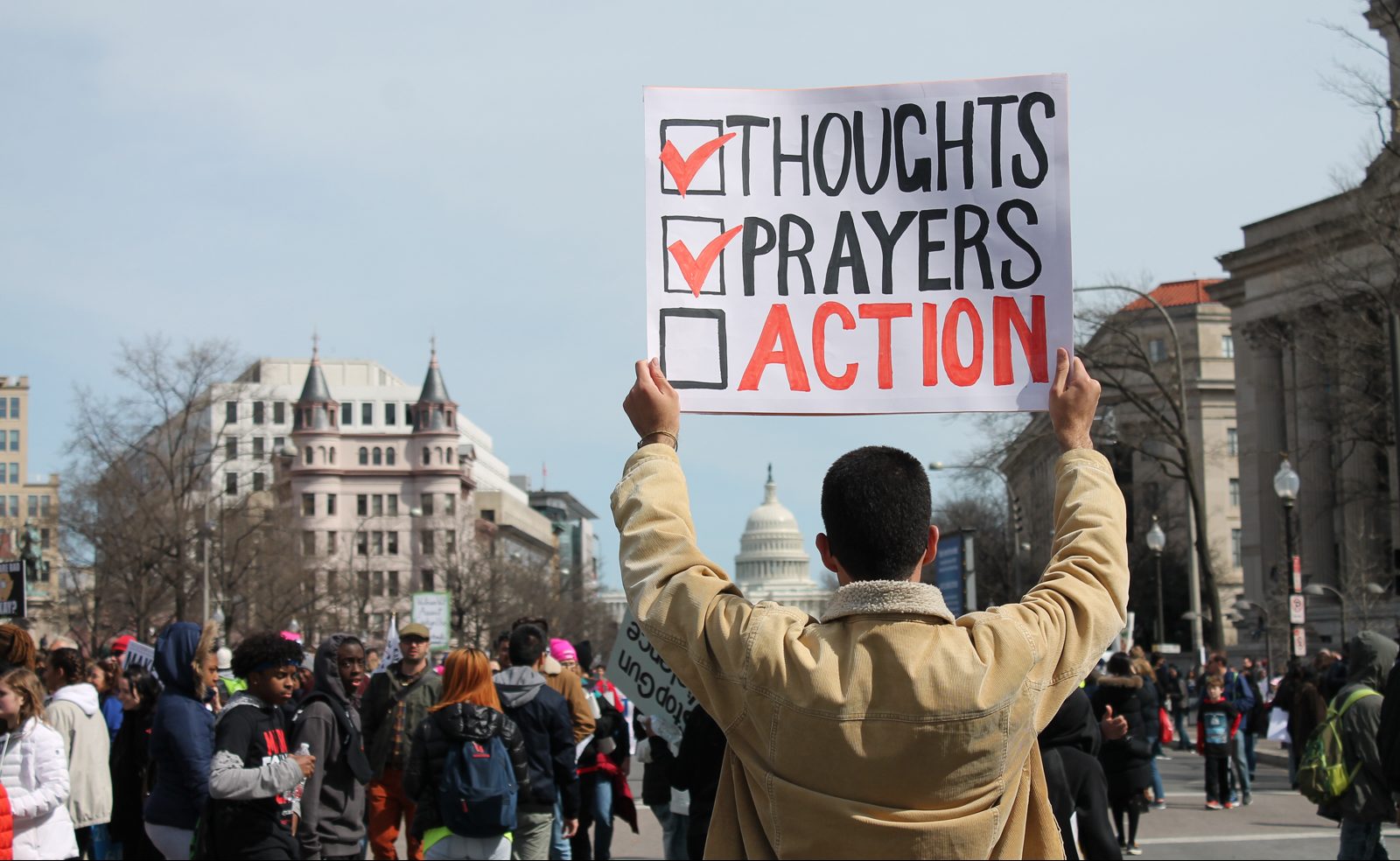 As Saturday’s March for Our Lives wound down, Ari Goldstein (COL ’18) waited for a friend to find him at the intersection of Pennsylvania Avenue and 9th Street. Above his head he held a sign that read, in giant, black letters, “ENOUGH.” And that, he said, is why he was protesting.

“I’m here to say ‘enough’ because this march shouldn’t be necessary,” Goldstein said. “Gun violence is the most solvable problem we have in this country, and yet it’s one of the gravest problems.”

The debate over guns and gun violence has sprung to the forefront of the national political scene since a former student of Marjory Stoneman Douglas High School in Parkland, Fla., attacked the school in February, leaving 17 dead and 17 wounded. Survivors from the shooting in Parkland organized a march in D.C. on March 24, calling for an end to school shootings and gun violence. Many Georgetown students attended the march, both as members of groups and on their own.

Georgetown’s Episcopalian minister, Becky Zartman, led a group of them as they walked the three or so miles from campus to the event.

“It finally feels like this is a watershed moment and something might be happening to change how we get to live in our country,” she said.

News reports of school shootings have punctuated her life since her adolescence.

“I was in high school when Columbine happened, and I was in college when Virginia Tech happened, and I have to be here because someone is finally doing something about it,” Zartman said.

The students and staff in Zartman’s group came together in the morning for an interfaith breakfast hosted by Georgetown’s Catholic Ministry. At that breakfast, a few dozen people milled about, eating bagels and talking about the march that would start a few hours later. Breakfast in hand, the group gathered to listen to several members of different campus faith communities. Julia Friedmann (SFS ’19) asked for a moment of reflection over a Jewish teaching.

Baasit Bhutta (COL ’18), a member of the Georgetown’s Muslim Students Association, recited a prayer, asking God for safety from evil. A Presbyterian chaplain, the Reverend Olivia Lane, prayed for worldly change, guided by God, in pursuit of justice and love.

“Give us the courage and inspiration to build this world as we pray with our feet and serve with our very lives,” Lane said. “And may all those who have experienced the scourge of gun violence know the comfort and hope through our cry today.”

And pray with their feet they did. At about 10 a.m., two hours before the program started, the group left the breakfast and made their way downtown. 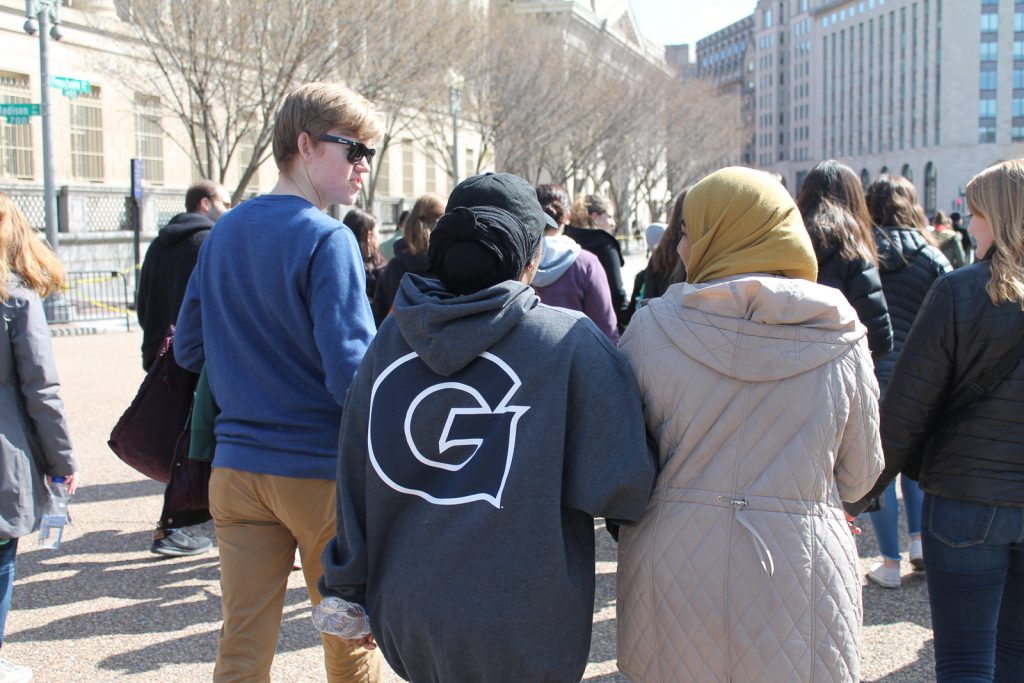 Georgetown students walk from an interfaith breakfast on campus to the March for Our Lives. Margaux Fontaine/Voice.

When they got there, students began chanting: “Enough is enough” and “What do we want? Justice! When do we want it? Now!” But the one that carried the day, rising from the hundreds of thousands gathered on Pennsylvania Avenue was, “Vote them out,” referring to politicians who speakers say have refused to enact the policies march participants generally favor, like an assault weapons ban and universal background checks.

In the week leading up to the march, GUSA’s Federal and DC Relations Committee pushed for student advocacy by tabling around campus and releasing a video on the theme “Never Again.” They encouraged students to engage with some of the policy options to promote school safety.

“This week, decide what YOU want to advocate for,” read a Facebook post announcing the committee’s campaign.

Peter Hamilton (COL ’20), vice president of Georgetown University College Republicans (GUCR), expressed similar desires to end gun violence, but did not agree with the march’s policy goals. Reading from the March for Our Lives’s official website, he found that its ambitions were broadly agreeable.

“Nobody disagrees with that,” he said, referring to the march’s stated mission of ending the epidemic of school shootings. “The problem is what are the policies that they support in order to achieve [their goals]?”

Hamilton used the example of the school walkouts held across the country on March 14, one month after the shooting in Parkland, Fla., to show how limited the discussion around gun violence and mass shootings is around the country and on campus. At Georgetown, over 200 students participated in the walkout organized by student-activists.

Hamilton said that the specific gun policy that walkout organizers’ advocated for along with the sticker that University President John DeGioia wore on his coat promoting an assault weapons ban showed the one-dimensionality of the conversation at Georgetown. The popularity of such a ban exemplifies to him that his conservative views are not welcome by many who have politicized the issue and closed themselves off to thorough discussion.

“There’s a suggestion that there’s only one correct policy and that everyone has to agree on that policy,” said Hamilton. 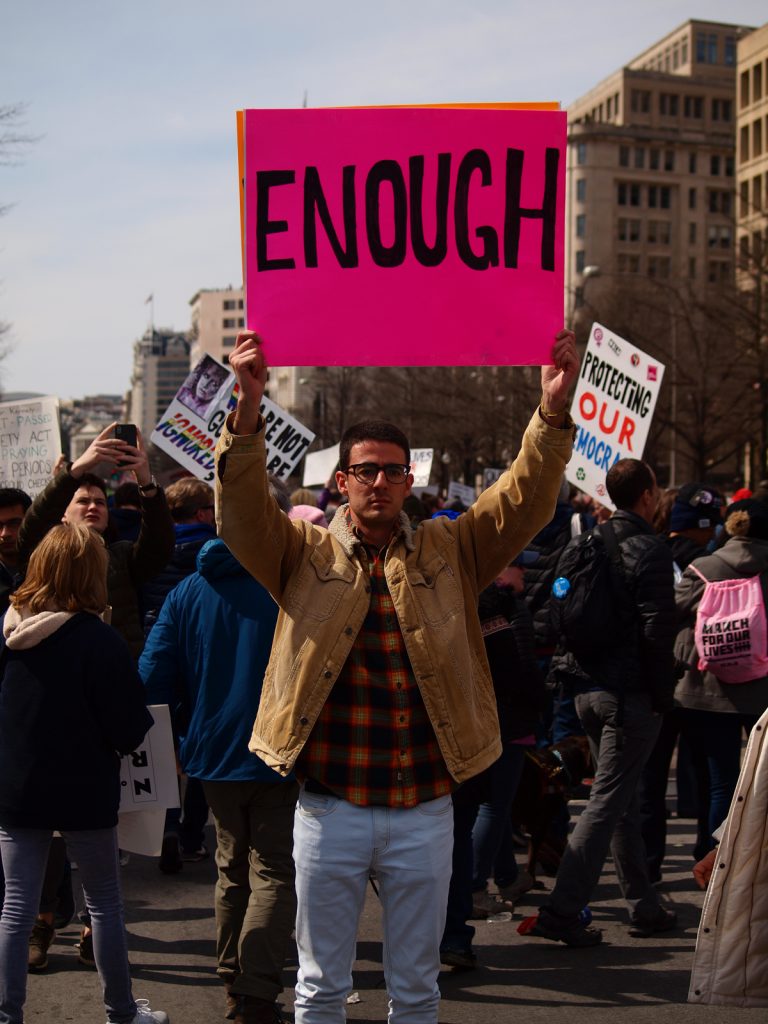 Ari Goldstein (COL ’18) waits for a friend at the end of the march.  Jack Townsend/Voice. 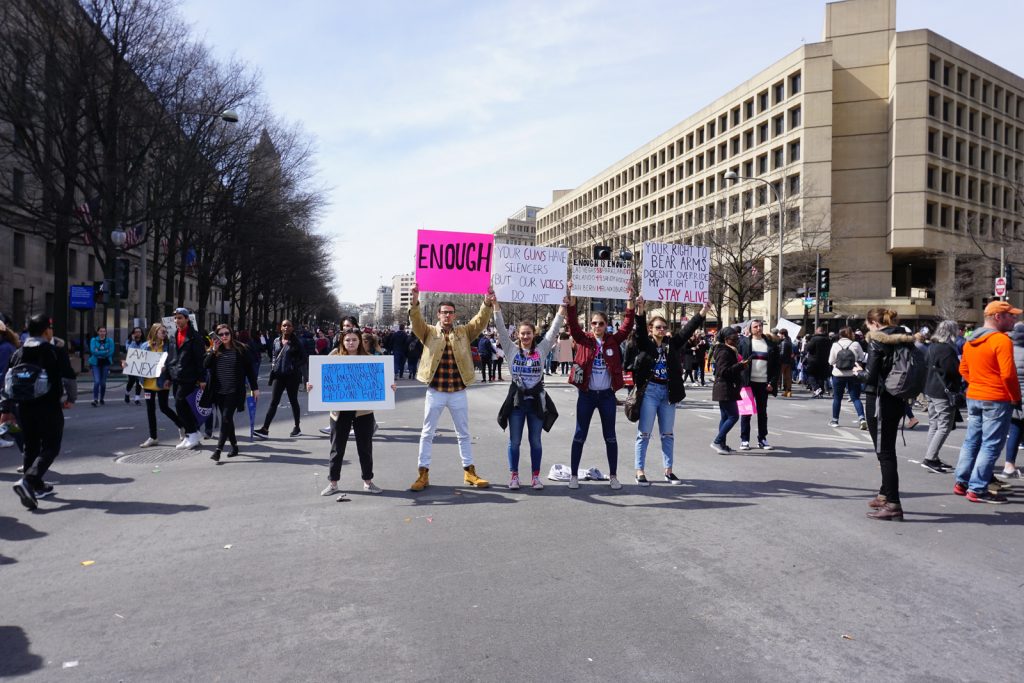 He commented that this type of thinking creates an orthodoxy which limits the scope of debate and hinders finding real solutions to the problem of gun violence.

Instead, Hamilton argues leaders on the issue of gun violence push a single set of solutions without allowing for the possibility that those solutions are not optimal. Hamilton said that many activists cast disagreement with the prevailing ideas of the movement as tantamount to accepting the status quo of gun violence. But Hamilton maintains that he is committed to revising that status quo.

He told the Voice that the College Republicans hadn’t issued a statement regarding the march and that they endorsed neither the march nor last week’s walkout.

In contrast, Emma Vahey (COL ’20), a board member emerita of Georgetown University College Democrats, said that the march is a tipping point in the debate about gun violence. One of the primary reasons she cares about the issue is its tendency to disproportionately affect marginalized members of society.

“There are kids in inner-cities that have school shootings all the time, and we don’t talk about that,” she said. “It’s sad for me to think about that.”

On campus, Vahey said she sees a new level of interest in advocacy for reforms which might reduce the prevalence of gun violence.

“Georgetown’s campus is seeing the most activism and actual advocacy, like boots on the ground, not ‘clicktivism,’ this school year than I think that it has ever seen,” Vahey said. 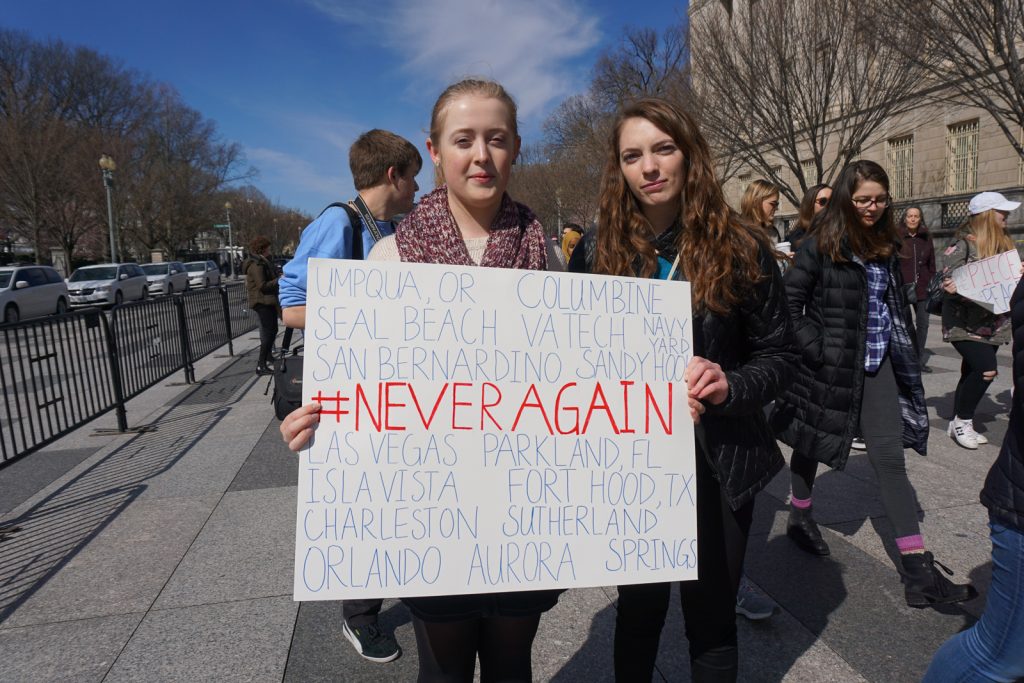 Georgetown students in front of the White House on their way to the March for Our Lives. Margaret Gach/Voice.

Like Hamilton, Vahey brought up DeGioia’s appearance at the walkout. Vahey, who helped organize the event, said that she and other students invited the university president to speak, and his support for their cause was cause for celebration among organizers.

But she also noted that the march will not be enough.

“There is a lot more work to be done,” Vahey said. “There are a lot more conversations to be had, which is why I hope this movement that’s happening right now can actually, not even spark those conversations, but literally set them on fire.”

By Margaret Hartigan and Nora Scully