Empty Houses and the Stories Inside: Evicted Confronts an American Tragedy 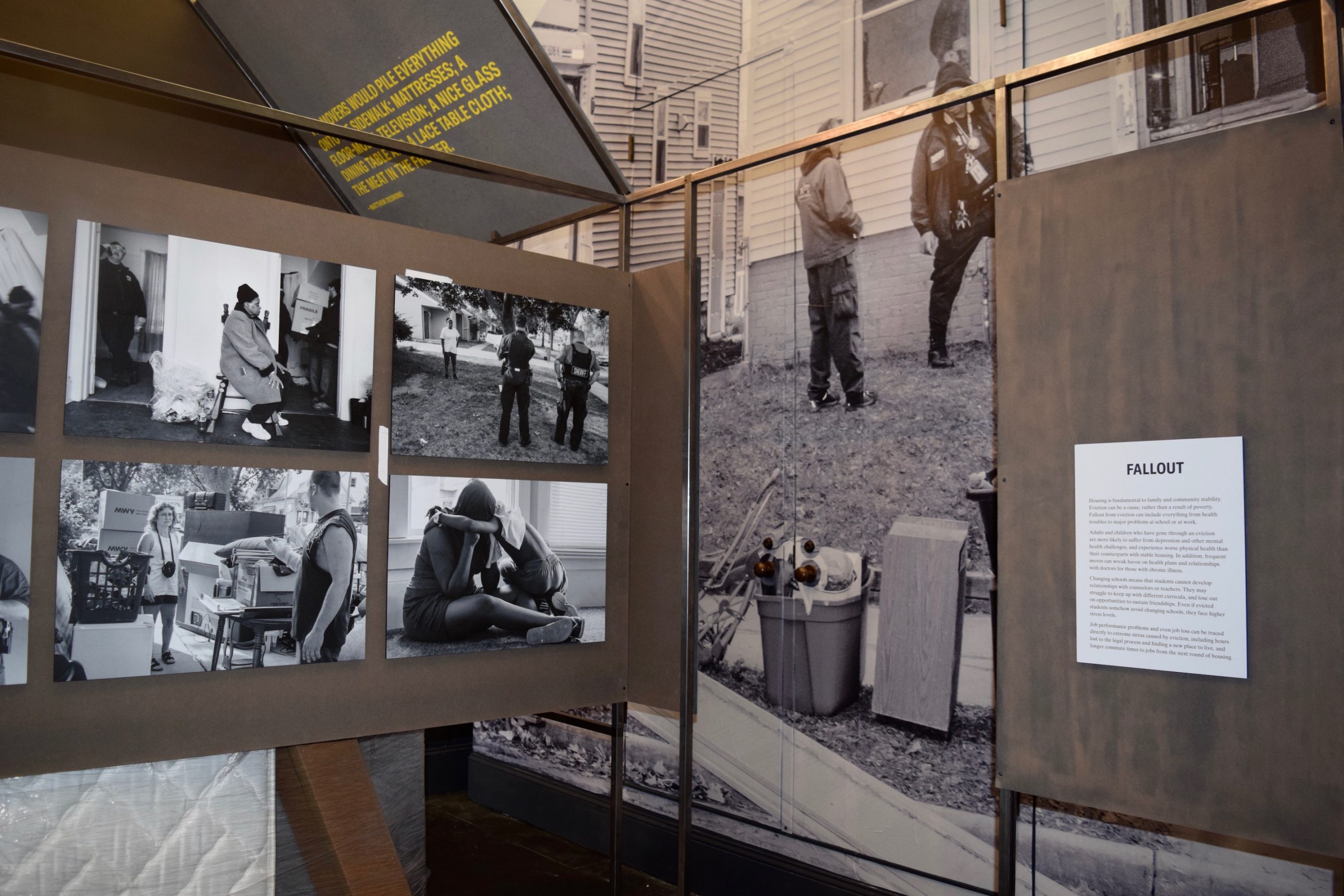 A home is a source of safety, success, and livelihood, and yet so many Americans must consistently live without one. Evicted tells their story. Based on sociologist Matthew Desmond’s book of the same name, this immersive exhibit at the National Building Museum dives into the harsh realities of poverty, eviction, and homelessness.

The first piece the viewer encounters is a wall-sized map of the United States composed of cardboard moving boxes that represent different states, varying in size proportional to the number of evictions per year in each one. This is only the beginning of a few small but powerful rooms that serve as a sobering revelation and an urgent call to action.

Statistics and facts come alive in the mini-houses that act as canvases for the rest of the exhibition. While they’re shaped like houses, the structures hardly represent homes. They are rather skeletons with sparse walls, grey wallpaper, and misplaced hooks and knobs. Voices of evicted tenants emanate from within them, while photographs, infographics, and poignant quotes cover the exteriors.

Inside one of the houses, a teenager in a video painfully recalls being homeless as a high schooler. From another, Desmond’s voice echoes, “The average homeless person in America is 9 years old.” On the outside wall, an infographic made of house keys shows the disproportionate rate of eviction for African-American women, a testament to the quote beside it: “Eviction affects the old and the young, the sick and the able-bodied. But for women of color and their children, it has become ordinary.” Another graphic displays the disturbingly simple cycle of eviction initiated by nuisance ordinances, which label a property as a nuisance—and therefore a red flag for landlords—when it is the site of too many police calls, thereby forcing victims of domestic violence to choose between calling for help or having a roof over their head.

The social justice theme of Evicted is a change of pace for the museum, which has in the past utilized its spacious interior for more showy, Instagrammable spectacle art such as a giant ball pit that simulates a beach and, more recently, a sky-high dome made of paper tubes. Nonetheless, Evicted proves that the same engaging multimedia techniques can be used for a less zany, more meaningful purpose. In many ways, the opulent design of the museum enhances the contrast between the grim truthfulness of the exhibit, which is tucked away in a side room, away from the regal columns and high ceilings.

At the forefront of this shift toward more serious and educational exhibits is Sarah Leavitt, a curator at the museum who was the creative force behind the adaptation of Desmond’s book into an immersive experience. Her previous work includes Architecture of an Asylum, which explored the history of St. Elizabeths Psychiatric Hospital as well as House and Home, an exhibit about housing in America. To bring Evicted to life, Leavitt collaborated with Desmond himself, but also gained personal understanding of the issues by visiting and sitting in on hearings at D.C.’s landlord-tenant court. The effects of this experience translate directly into the exhibit through a mini-house about eviction courts. It is dark and unenterable, forcing the viewer to look and listen through a window, to understand the powerlessness of a soon-to-be evicted tenant.

While the majority of the exhibit reflects the intense grief and anxiety of eviction, the last gallery offers a ray of hope, both physically and thematically. The room is welcoming, full of natural light, and cozy, unlike the gray and bleak galleries before it. It focuses on the future and emphasizes the importance of nurturing the seeds of change that activists throughout history have planted. There is a new map on the wall, and this time it recounts the successes of individuals and communities who fought back against unjust housing policies across the nation, from the fight for rent control in New York City in the 1920s to the passing of a tax to expand a affordable housing in Kansas in 2017.

For those who don’t have time to read Desmond’s 300 page study of eviction and the effects of the private housing market on the poor, this exhibit provides a comprehensive and emotional summary of this important but often overlooked topic. For those who have read the book, it presents little new information, but the immersive experience makes the already-heavy material much more tangible and difficult to ignore. The success of Evicted lies in this perfect union of facts and feelings, of the national data and the countless personal tragedies it embodies. It is nearly impossible to walk away from the millions of damaged lives that are presented in the photographs, statistics, and videos of Evicted without feeling deeply unsettled and hungry for change.