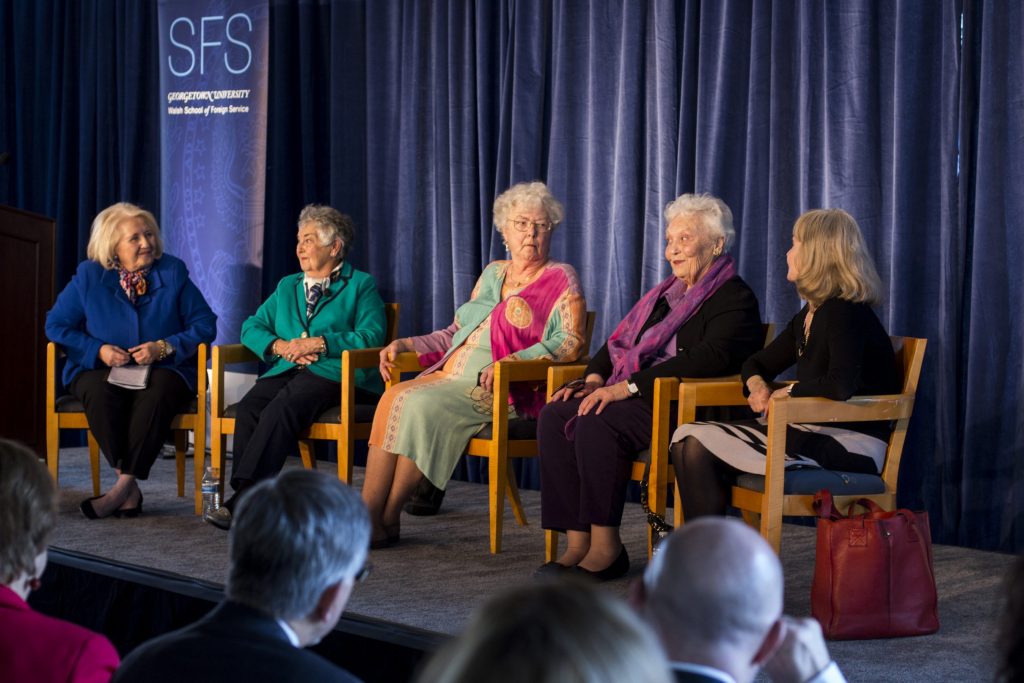 When Barbara Berky Evans (SFS ‘58) arrived on campus in the fall of 1954, she had no idea she was going to make Georgetown history. Her focus was on getting out of her native Chicago and taking interesting classes. But she was also a member of the first SFS class to include women as day students.

“I had no idea what I was getting into, I really didn’t,” Berky Evans said, speaking as part of a panel of the first women to attend the SFS. “On the brochure that came to my house, on the bottom someone typed in, ‘Women are now admitted to the day school.’ Which should have been clue number one.”

The School of Foreign Service first began admitting women to night classes in 1944. Prompted by wartime demands, the faculty decided it would be beneficial to the country for women to speak foreign languages, but they only allowed them to enroll in certain night courses, mostly the consular and diplomatic course. Berky Evans was one of just 25 women admitted to the day school’s first co-ed class in 1954.

Until 1980, the university had a quota limiting the number of women admitted to the SFS to one woman for every eight men. However, women had more academic success on average than their male counterparts. Today, women make up more than half of SFS students, and 55 percent of Georgetown’s student body are women.

But the first women students faced challenges that their male counterparts did not. The university was ill-equipped to provide housing for the new female students, so many had to live in the dorms for nursing students, which did not accommodate the evening SFS classes. The dorms had a 9 p.m. curfew; the women would often be in class until 10 p.m.

“I’m afraid the nun was not too happy to come down the stairs dressed for bed and having to unlock the door and thought it was inappropriate for a female to be out at that time of night,” Barbara Hammes Sharood (SFS ’58) said during the panel.

The women struggled to find female friends in their courses and to garner respect from their male classmates and professors, who often did not allow female students to enroll in their classes. Of the 25 women who arrived on campus in the fall of 1955, the second term to admit women, only eight graduated in 1959. “It was a pretty lonely time until some of these other ladies showed up,” Berky Evans said.

The women who remained in the program met their challenges and formed a group called the Foreign Service Women’s Association, of which Hammes Sharood was student president. The organization served to support women through their time in SFS. “We just overcame some of the limits and broke a few barriers and a little more, a little more, a little more, until what you see today,” Berky Evans said of her contribution to women on the hilltop.

Along with several of their classmates, Berky Evans and Hammes Sharood came back to Georgetown on Wednesday, April 18 for a panel on their experiences at Georgetown. The event, which took place in Fisher Colloquium, was a panel moderated by Ambassador Melanne Verveer (I’66, MS’69) and discussed the women’s experiences during their time at Georgetown and beyond.

The panel was part of the SFS’s Centennial Celebrations, commemorating the 100 year anniversary of the school’s creation in 1919. The panel included some of the first female day students at Georgetown: Berky Evans, Hammes Sharood, Helene Gettler Mallett (SFS ’59), and Paula Wiegerd Tosini (SFS ’60). The event included closing remarks from Lulu Garcia-Navarro (SFS ’94), an NPR radio host.

SFS Dean Joel Hellman said the faculty working on the SFS Centennial acknowledged the strides the SFS had made in advancing the careers of women. “The role of the school, this issue of creating the foundation for women across international affairs, business, government, journalism,” Hellman said. “This was something that we thought we needed to celebrate and we needed to explore in our own history.”

As the alumni looked at the women sitting in the audience, the first women—called “women pioneers” in the event’s description—thought about the future and the role of women in education today. “Their opportunities are so much greater than ours … each generation sort of builds on the next,” Gettler Mallet said.

In her closing remarks, Garcia-Navarro said that women still had progress to make for equal rights. She said that, with the help of women like the first SFS students, women’s rights in the United States had made progress. But she also said that her experiences revealed just how much progress still has to be made.

“The questions are not if we can do it, but rather, are we getting paid the same amount for it? Are we being allowed to work without harassment?” Garcia-Navarro asked, “Are there enough women in the halls of power, in media, in politics, in national security, who are in leadership?”

To Berky Evans, the progress is profound. “I think that these young women—there are no limits for them. There are no limits,” she said, “One of them could easily be the next president, that’s how I think of them, right? That was unheard of in my day.” 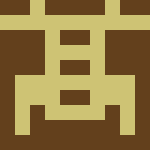