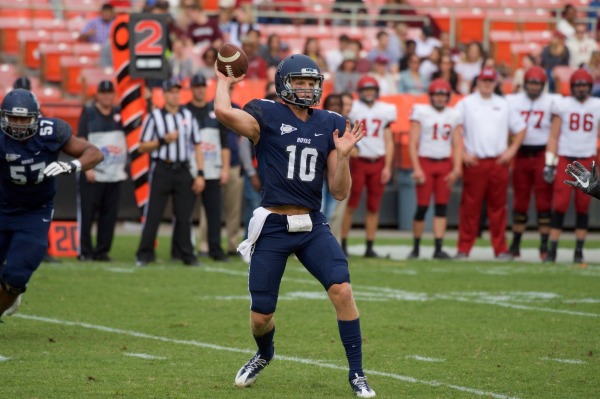 At almost every school competing at the Division I level of college football, it’s that time of year again for the student body and larger fanbase; season tickets are being secured, tailgate tents are being ordered, gameday polos being tried on. The dog days of summer will soon give way to another campaign chock full of circle-your-calendar matchups, captivating storylines, and emerging superstars.

At Georgetown University, students and alumni might be seen similarly descending toward the home team’s gridiron this fall. Problem is, they’ll then likely continue walking, towards Shaw Field to watch the nationally ranked men’s and women’s soccer squads.

Coming off the heels of a 1-10 2017 campaign that included an 0-6 mark in the Patriot League and three twenty-plus point losses to Ivy League schools, the Hoyas can hardly go anywhere but up this season. However, a lack of identifiable change to the program that has slid from four, to three, to three, to one win in each of head coach Rob Sgarlata’s years in charge means that improvement is far from a given. Picked a distant last in the Patriot League Preseason Coaches’ Poll, it’s clear the Hoyas’ opponents don’t think much of them either.

“It’s no mystery with the season we had last year about what the league thinks of us. People outside of the Hilltop, to me, their opinions don’t really matter,” Sgarlata said of the ranking. “I’m worried about what our kids think about our program, how our coaches present our program.”

Under normal circumstances, 2018 would be a make-or-break year for Sgarlata, who is likely on the metaphorical hot seat. However, the Hoyas are playing under no normal circumstances, the most crippling of which remains the university’s policy of not offering full scholarships for football. Six of the seven competing universities in Patriot League football have been offering scholarships since the conference approved their usage in 2013, with Georgetown remaining the lone holdout.

It’s a grim outlook for a team that won eight games as recently as 2011 — the year then-Head Coach Kevin Kelly won Patriot League Coach of the Year and was a finalist for the Eddie Robinson FCS Coach of the Year Award. One argument for keeping Sgarlata on board is the payoff the program saw for keeping faith in Kelly, who won only five games in his first four years from 2006-09. Sgarlata, for comparison, has won eleven. Between 2010-13, however, Kelly and Sgarlata (who served as defensive coordinator from 2004-13) made the Hoyas competitive again in the Patriot League, steering the team to nineteen victories.

If the Hoyas are going to take a similar step forward in 2018, it will take an impressive debut season from first-year offensive coordinator Rob Spence, who arrives on the Hilltop with more than twenty-five years of college coaching experience to lean on, including stints as offensive coordinator at Clemson and Syracuse. Spence inherits an offense that averaged a measly 12.5 points per game last year. However, Spence does have dual-threat junior quarterback Gunther Johnson, who saw extensive playing time last season in his first year in the Blue and Gray after transferring from the University of Arizona. Johnson, who accounted for 1,284 yards and eight total touchdowns after taking over in game five of the 2017 season, figures to be under center from start to finish in 2018.

“I think he’s probably the greatest OC I’ve played under,” Johnson said of Spence. “Not only from a football standpoint and his intelligence all the places he’s been, but also it’s the everyday life aspects and life lessons he’s taught me just being positive and being a leader.”

Perhaps the most concerning statistics for the Hoyas were their rushing numbers in 2017: a putrid 59.8 yards per game on only 2.6 yards per carry. The Hoya offense could not stay on the field, particularly in the first half of games. Opponents averaged a 35:20 time of possession against Georgetown, and outscored the Hoyas 133-22 in the second quarter of games. Facing a fresh Hoyas defense in the first quarter of games, opponents held a more balanced 55-26 advantage.

Fortunately, a Georgetown offensive line that was beset by injuries last season will see some measure of continuity in 2018, returning eight players that have seen game time and five with at least five starts. They will be paving holes for senior Carl Thomas, who carried 37 times in 2017, and sophomore Jay Tolliver, who ran 8 times and saw action as a kick returner.

At wide receiver, everything starts with junior Michael Dereus, who caught 46 balls for 596 yards and five scores in 2017. A second-team All-Patriot League selection, Dereus was the only true gamebreaker on the Hoyas offense a season ago. His involvement went beyond the passing game, as Dereus also returned punts and received the occasional end-around. Entering 2018, he is unquestionably Georgetown’s biggest offensive threat.

Beyond Dereus, the Hoyas certainly return an intriguing group of pass-catchers. On the perimeter, 6-3 senior Brandon Williams returns after hauling in 24 passes in 2017, while  sophomore Max Edwards and senior Winston Jackson are likely to work out of the slot. Junior Isaac Schley, who saw action in eight games in 2017, is in line to start at tight end while being primarily backed up by classmate Max Ungar.

Defensively, Coach Sgarlata and second-year coordinator Kevin Doherty will have to take steps to improve a unit that was largely overmatched last season and faces a personnel overhaul this season. The defensive line, however, returns three players who played all 11 games in 2017, led by junior defensive end Khristian Tate. The 2017 All-Patriot League lineman stuffed stat sheets last season, with 69 tackles (12.5 for loss), 5 sacks, three fumble recoveries, an interception, and two defensive touchdowns in 2017.

Tate said the double teams and extra attention he’s likely to be paid this season by opposing offenses doesn’t change his approach: “I mean at most I might have to, because of the doubles, play them a little bit differently, but I mean, same mindset: go out there and play as hard as I can.”

Seniors Brenden Sawicki and Mike Taylor III should also contribute on the line, while the duo of sophomores Duval Paul and Kingsley Umemba each saw extensive game time in their freshman campaigns.

Tate is pleased with how the unit has gelled: “I think we’re doing a good job of the old guys taking the young guys under our wing and coaching them through things they don’t understand,” he said. “If they’re not comfortable asking coaches questions or something like that, they’re comfortable asking us questions.”

Despite losing Daniel Yankovich and Cameron Seward (132 combined tackles) to graduation, the linebacking corps, featuring a quartet of sophomores, looks similarly strong. Wesley Bowers was tabbed for eight starts in his debut season and totaled 57 tackles, while Ahmad Wilson will likely become an every-down player after notching 40 tackles and earning All-Patriot League honors as a special teams contributor. Xavier Reddick and George Ikott add to the group, having appeared in ten and eight games, respectively. Additionally, the Hoyas gained commitments from five incoming linebackers on National Signing Day.

In the secondary, the losses of second-team All-Patriot League safety David Akere, who paced the team with 99 tackles last season, and cornerback Jelani Williamson (47 tackles, 11 pass breakups), will sting, but there are still familiar faces that will patrol the defensive backfield at Cooper Field this fall. Senior Ramon Lyons, the Hoyas’ starting cornerback opposite Williamson in 2017, will be returning with classmate Blaise Brown, a safety who has the size to step down into the box if need be. Behind them, senior Jethro Francois will likely compete with juniors Jalen Goldwire and Leon Agee, for the remaining starting spots at defensive back.

2018 promises to be a telling year for the Hoya football program, and perhaps the smoke will clear surrounding a few of the questions encircling the underdog Hoyas.

“After the season ended last year it was apparent what happened last season wasn’t going to happen again and we weren’t gonna let it happen,” Johnson said. “ We spent the entire offseason rebuilding the culture with guys that love football and guys that want to win.”

There is little buzz about the Hoyas as kickoff draws near, yet that hardly means there will be nothing to talk about in year five of the Sgarlata Era on the Hilltop. 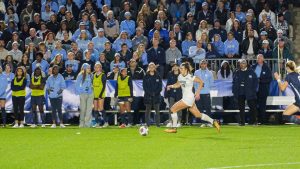 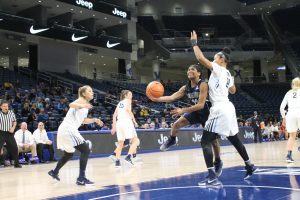 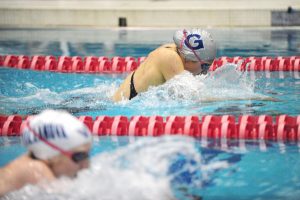 Swimming and diving puts in a strong showing at Bucknell Invite