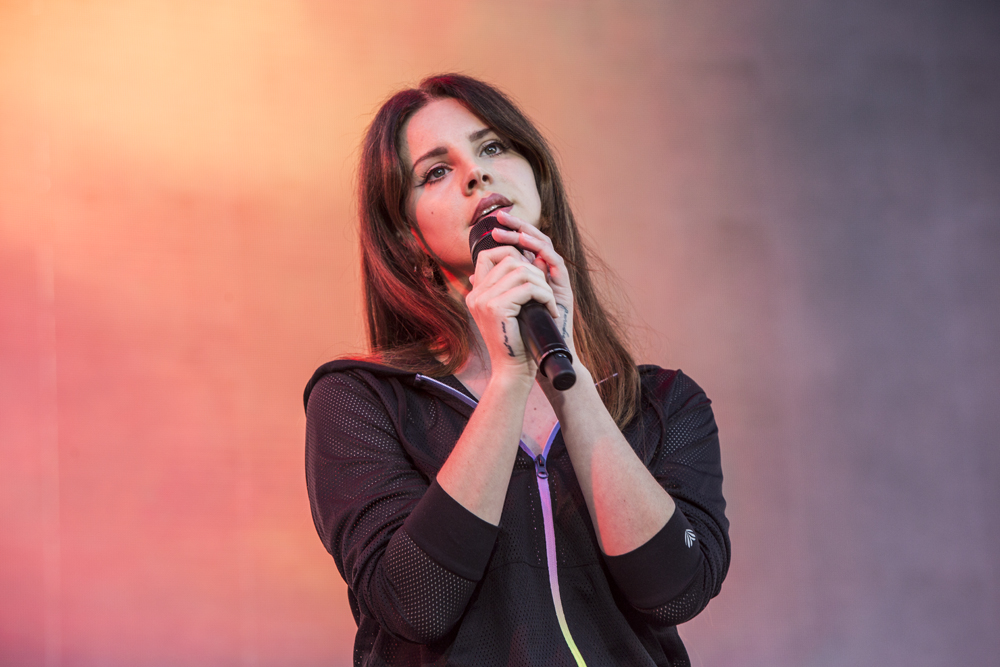 On September 12th, with little fanfare, Lana Del Rey released her new single “Mariners Apartment Complex”. The song is the first piece she’s released since her album Lust For Life (2017) and brings about a welcome change from some of her past musical eras.

This new album cover stands in stark contrast to all of her previous works. Instead of thick hair cascading down her shoulders, it’s crudely pulled back, as if an afterthought. Her apparent lack of makeup only heightens the emphasis on her defiant expression as she stares straight into the camera.

While her face holds most of your attention, it’s impossible to miss the design on the graphic tee she’s wearing, with the words “Venice Bitch” plastered over the face and stomach of a woman in a sheer bodysuit. She does, however, still give us that classic piece of “Lana” flair with the polaroid-esque quality of the picture, an aesthetic usually reserved for her numerous music videos. In this way, Del Rey tells us what we are about to listen to before we even press play.

In “Mariners Apartment Complex”, Del Rey introduces her listeners to a new style that still contains some of her signature sounds. The pop ballad opens with simple piano chords and some of her usual sweeping orchestral swells, later replaced by the lazy strumming of an acoustic guitar. Already, however, Del Rey is straying off her beaten sonic path of slow synths. Her lyrics, however, remain as true to her traditional melancholy aesthetic as ever, with Del Rey declaring: “I’m the board, the lightning, the thunder / the kind of girl who’s gonna make you wonder / who you are and who you’ve been.”

Immediately after she reaffirms her classic sultry, ride-or-die chick image with the lines, “and who I’ve been is with you on these beaches / your Venice bitch, your die-hard, your weakness / maybe I could save you from your sins.” The instrumentals build to a chorus filled with a mix of her new and old sounds—orchestral strings and lofty wind tones supported by the constant guitar and piano. All of this backs Del Rey’s ending words of the chorus where after claiming “You lose your way just take my hand,” she confidently states “I’m your man.” This is where Del Rey makes her biggest emotional departure from her previous works. She’s still ride-or-die, but she’s no longer helpless; instead of following a man down, she’ll help raise him up.

The “new sound” in this single comes from famous singer, songwriter, producer, and pop music guru Jack Antonoff, who has been working with Del Rey on her upcoming album recently revealed as Norman Fucking Rockwell. Del Rey is far from the first famous singer/songwriter Antonoff has collaborated with, some of the most notable ones having been Taylor Swift with her album Reputation (2017) and Lorde with Melodrama (2017). So far, Del Rey and Antonoff’s styles have proven to be so different that they mesh instead of one cancelling out the other. While the song is (thankfully) free of a signature Antonoff synth beat, it also proves to be more comprehensible, upbeat, and digestible than a typical Lana Del Rey track.

After releasing her fourth studio album Honeymoon (2015) Del Rey appeared to have lost her prevalence in the world of pop. While the album was beautifully produced and exquisitely written, it was full of extremely slow, almost cinematic ballads, and lacked the kind of radio-friendly singles Del Rey had been previously known for. In what can almost be looked on as an overcompensation, Del Rey released her fifth studio album Lust For Life. When the album came out last June, it was heralded as a resolution to Lana’s discography, and therefore to her life.

The woman who once had no problem singing “he hit me and it felt like a kiss” on the title track of her third album Ultraviolence (2014), was now confidently declaring “I’m young and in love” over the joyous sweeping tones of the album’s lead off single “Love”. This song was then followed by the album’s title track—a dreamy pop anthem with The Weeknd—two more radio-friendly duets with rapper A$AP Rocky, and finally other songs which were much more politically inclined and much less focused on members of the opposite sex than any of her previous works had been, like “Coachella-Woodstock In My Mind”.

Even the album cover caused shock when it was released, as it featured Del Rey boldly grinning from ear to ear (“Can you believe it? Lana… smiling?”) with flowers in her hair instead of her usual sultry scowl. All of this provided critics and fans alike with the evidence for the clean and simple narrative “Lana used to be sad and fucked up, but she’s happy now.”

What “Mariners Apartment Complex” proves is that Lana Del Rey’s story is not over, and that we would not be giving her enough credit by automatically assuming a happy ending. With nuance of confidence, longing, and maybe even some joy, Del Rey will continue to write her narrative, and we are lucky enough to get to listen.

Following a Streak of Successful Rom-Coms, Netflix Gets Cocky and Falls Flat with Sierra Burgess is a Loser
Maybe the Bills aren’t that bad? And other thoughts from Week 3 of the NFL