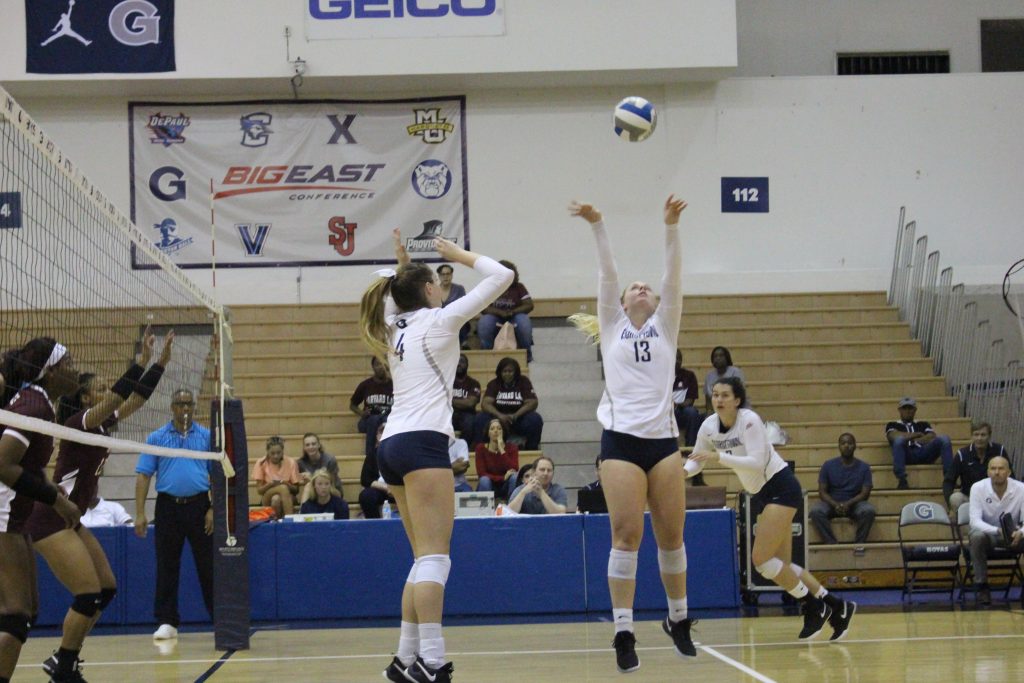 The Georgetown volleyball team (10-7, 3-2 Big East) lost their first two Big East games of the season over the weekend on their Midwest road trip, falling to No. 20 Marquette (12-4, 3-1 Big East) on Friday and then on Saturday against the DePaul Blue Demons (3-12, 1-3 Big East). It was a disappointing showing from the Hoyas, who won only one set as the six-game winning streak they entered the weekend with was snapped.

The Golden Eagles of Marquette were always going to be a formidable opponent on Friday, having rolled through a tough non-conference schedule relatively unscathed, picking up wins over Syracuse, LSU, and USC along the way en route to their No. 20 national ranking. The Hoyas kept things tight in the first set thanks to some efficient net play with 14 kills to only 4 errors, but were constantly under fire from Marquette 6’5” junior outside hitter Allie Barber, who led the match with 13 kills, and the Golden Eagles took the first set, 25-18. Marquette was dominant in the second set, winning 25-13 as the Hoyas committed more errors at the net than they did kills, 9-8. The Hoyas were unable to prolong the game as the Golden Eagles wrapped up the sweep with a 25-20 third set victory. Junior outside hitter Iva Vujosevic paced the Hoyas with eight kills, senior outside hitter Alyssa Sinette was not far behind with seven, while sophomore setter Margo Pivonka led all players with twenty-three assists.

Georgetown was unable to bounce back against DePaul, as first set was the only one the Hoyas would take. They looked dominant in their 25-19 first-set triumph, recording 16 kills to only four errors at the net. Senior middle blocker Symone Speech was the Blue and Gray’s X-factor, leading all players with fifteen kills on the night. The Hoyas let their chance to seize the match slip away in the second set, losing 25-22 while DePaul rode that momentum to 25-15 and 25-20 victories in the third and fourth sets, respectively. Vujosevic had a strong showing with eleven kills while Pivonka again paced all players with 30 digs. Senior libero Kenzie Higareda recorded 28 digs, but the Hoyas proved unable to slow down the Blue Demon’s balanced attack (3 players with 9+ kills) as the home team picked up their first Big East victory of the season.

It’s right back to the heartland for another Friday/Saturday pair of road games for the Hoyas, as they look to return to winning ways against conference opponents Butler (5-11, 2-2 Big East) and Xavier (4-12, 2-3 Big East), respectively. Follow @GUVoiceSports on Twitter for more volleyball and other fall sports coverage.

Dystopia’s Daughters: What Westworld and The Handmaid’s Tale Have In Common
Hoya Hub food pantry opens in Leavey Center