What I admire most about Georgetown’s Jesuit ideals is the value they place on being attentive to your surroundings, especially to what may seem like distractions. As unusual as it sounds, distractions can actually reveal unexpected lessons and call you to some form of action.

I never expected to see this Jesuit value reflected in something as random and far from campus as wacky-looking street art in Moscow, a distraction that was a lesson in disguise. Throughout its 871 years of history, Moscow has seen many cultural and political epochs, and the city’s art reflects that. Statues of renowned nineteenth century authors and playwrights stand blocks away from austere Soviet-era monuments.

But the collection of sculptures I came across in Bolotnaya square, a short walk from the Kremlin, was different from the rest. At first, the weird statues standing in a semicircle seemed like complete distractions. They featured characters with cartoon heads and multiple arms—bizarre enough to deter people from looking closer. I was intrigued, and began reading the caption on the main statue. “Равнодушие,” meaning “indifference” was engraved in the center. I looked at the character paired with the inscription, and the initially off-putting portrayal began to make sense, harmonizing with the rest of the piece. The statue’s eyes were closed, its ears were covered, and its arms were crossed. I started to realize it was more than abstract urban hipster art. Rather, the sculpture was a thoughtful piece with a message about human attitudes towards social concern.

The sculpture was a physical representation of indifference, the vice that the Jesuit mission calls us to combat, reminding us that it is more deceitful than it is innocuous. Aquinian theology states that indifference is toxic because it is not just carelessness towards oneself or others, but rather the compilation of passive habits which creates shallow virtues.

In the Russian language, this danger is revealed linguistically. There is not much to dissect in the etymology of “indifference” in English. However, in Russian the word means “an equal, complacent spirituality,” the complete opposite of the active, forward-thinking Jesuit mindset. 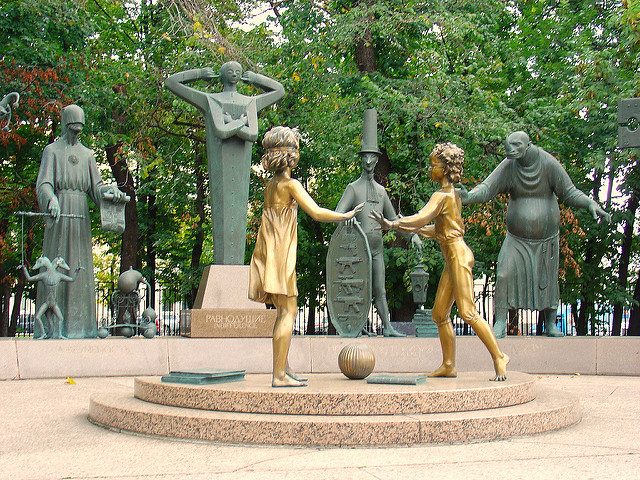 The apathetic, sarcophagus-shaped centerpiece of the sculpture was surrounded by other surreal characters representing various vices, such as alcoholism, drug addiction, war, theft, and exploitation of children. The goal was to demonstrate that indifference allows and aggravates other types of wrongdoing until it finally all compiles into evil. In the middle of all these imposing, gray figures was a pair of golden children, vulnerable but still untouched by the monsters around them.

The work, titled Children Are the Victims of Adult Vices, was created by Russian sculptor and activist Mikhail Shemyakin in 2001 to remind Russia and the rest of the world of the toxicity of aggressive indifference towards society, while also encouraging people to protect those most affected by and most susceptible to indifference and other vices.

It is revolutionary that this sculpture is housed in Moscow because of its inherently controversial nature in relation to certain aspects of the local culture. Russian culture is steeped in tradition, but it can often be strict and concerned with a set routine. Russia has a rich history, providing its people with fervent national pride, however it’s also had a past that has left it’s indelible marks on the Russian mentality. Like any country, Russia has experienced major historical trauma, from prolonged serfdom to the millions of casualties in The Great Patriotic War, and more recently, the economic anarchy after the fall of the Soviet Union. A rigid lifestyle and a melancholic mindset is common among Russians. Many live a simple life, predisposing some to act in survival mode. Operating within the routine of daily life sometimes leaves others by the wayside, as they are seen only as distractions, irrelevant to one’s day-to-day existence. But this unintentionally apathetic mentality is not unique to Russians. It’s equally common in our individualistic American society, leaving us open to emotional hardness and ignorance towards the pressing needs of the people in our communities.

The most vulnerable among us such as immigrants, refugees, the sick, the drug addicted, and the elderly are overlooked and deemed distractions. We ignore their hardships and thereby allow various vices to consume them.

In the recent discoveries of the horrendous complicity of the church in the child abuse cases, indifference and ignorance, whether purposeful or not, has played a significant role. Fewer of these travesties would occur with more attentiveness, critical discernment, and inner call to action. We must carefully and courageously examine what causes us to look the other way and deem certain issues we encounter unimportant.

By being attentive to all things, whether or not they seem distracting to our daily lives, we can uphold the good in our world and prevent a decay of our virtues. It starts with identifying indifference to our own shortcomings. This simple mechanism of checking ourselves can sometimes be difficult in practice. Nevertheless, it is a necessary way to initiate change. By dismantling our indifference, we take steps towards creating an atmosphere of peace and civility in place of the hostility and ignorance perpetuated by blasé human attitudes.

I encourage us all at Georgetown to apply our school’s values to our own self-examination. Reflect on the evils of ignorance. Bravely acknowledge those times you ignored something major in your life; be transparent and honest with yourself. Most of all, live out the Jesuit ideals of exploration and attentiveness and remember the warning of indifference’s consequences expressed in the sculpture in Russia. Do not disregard what you may interpret as a daily distraction. Tune into your environment and be inspired to become your own agent of change. 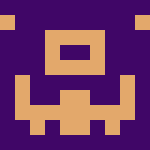