Home » Opinion » Beauty is in the Eye of the Beholdress 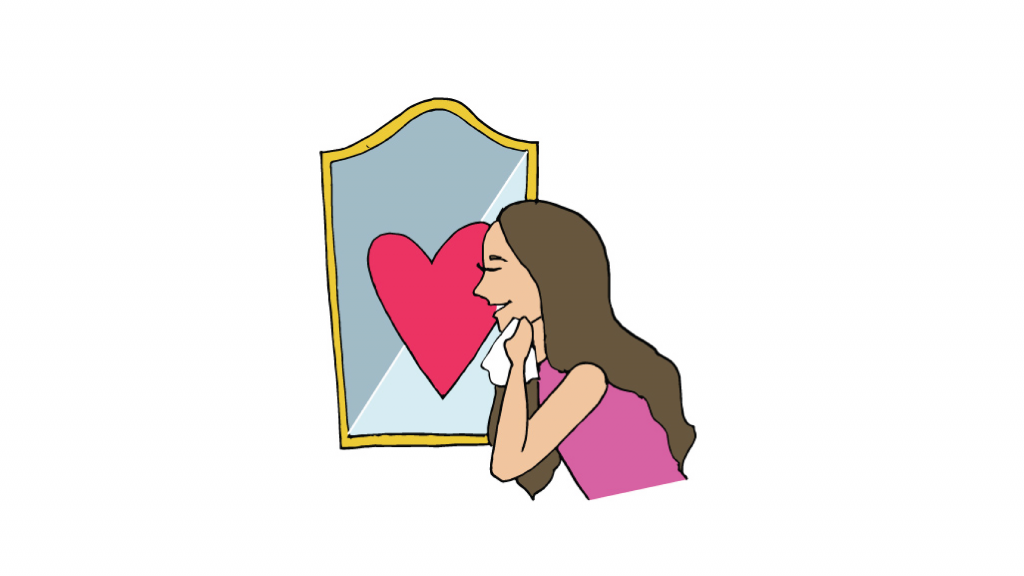 Beauty is in the Eye of the Beholdress

I didn’t wear makeup for over a year.

I highly recommend this to every girl who has been regularly applying makeup since those middle school days of uncomfortably large blobs of colored eyeshadow. It gave me a new perspective, and not just of my own face.

In my sophomore year of college, I defined myself in lots of ways: I became more dedicated to my favorite clubs; I declared my major; and I refused to apply any sort of definition to my long, light-colored eyelashes. Like the other two, this last decision developed organically over time and after much rumination.

I had already not worn makeup for the summer, since I worked as a lifeguard and spent my free time swimming and hiking. It had felt like the perfect liberating summer style; it took minimal effort to get ready, and I never had to worry about how my daily activities were affecting my appearance. When I came back to campus, I assumed I would revert to my usual habit of daily mascara and cover-up because campus was “regular life,” where I had to wear more than a bathing suit. But when I mentioned this to my boyfriend, he began to question me about why I wear makeup, and, like most of our conversations, it became a deep and convoluted discussion. I started thinking seriously about the role of makeup in my life, and its role in society.

This questioning continued for a year. When my boyfriend told me he thought I looked beautiful without makeup, it was enough to motivate me to stop wearing it completely. I assumed that I cared most about his opinion of my appearance since he was the person on campus I cared most about.

For the next 12 months, when I looked in a mirror, my naked face looked back. I got comfortable seeing myself that way, and I knew the people I cared about were also comfortable seeing me this way. But even after months had gone by, I still found myself occasionally wishing I had makeup on.

When I reflected on this, I started to realize that my original assumption was wrong. I did not wear makeup to look attractive to my boyfriend. I wore it to impress the broad, nebulous “society:” those people passing me on the street, meeting me briefly, or sitting around me in a classroom. My boyfriend, my family, and my friends all know me well enough to see my beauty goes beyond small physical changes. Heck, they have the opportunity to stare at my face long enough to know I have long eyelashes. But I wanted to wear makeup for the people who I am least close with. My desire for makeup was a desire to present myself in the best light possible for those who only see my outer facade, and therefore solely judge me based upon it.

And then I realized another piece of the assumption was wrong: I thought I wore makeup to look physically attractive to men. I assumed it became superfluous because I had a boyfriend who considered me attractive without it. Yet when I stopped “fixing” my face with makeup, I realized I only felt judged by other women. That’s not to say I got any nasty comments from other women–quite the opposite. When I talked about my decision, many were quick to praise me for being natural. But I still felt most naked when I could feel the eyes of a fellow woman on me, especially an attractive one.

The more I thought about it, the more it seemed to me that women judge each other by their levels of attractiveness. The majority of comments about my appearance, whether positive or negative, come from other women. My year without makeup made me more conscious of the female gaze. And, even if I don’t like it, I’m a part of that gaze. I’m still working out exactly why it is that, as a straight woman with a boyfriend, I care most about the judgments of the women around me and reciprocally make judgments based on their appearances. Maybe it’s a primal jealousy over the competition for “potential mates.” Maybe it’s a habit that has been socially inculcated into girls from a young age. Whatever the cause, I feel the need to emphasize my physical characteristics that prove to them that I can be “attractive.”

Yet removing my makeup also helped me be conscious of when I was trying to hide or change my appearance to fit a standard of beauty which I unnecessarily exaggerated in my head. While I became more conscious of the female gaze, I also realized the female gaze was not as harsh as I assumed. Instead of negative comments critiquing my appearance, I got compliments encouraging me to keep accentuating my best features. I was still my own harshest critic by falsely assuming others were harshly critiquing me. So I spent the year working on putting myself in a mindset focused on proudly highlighting my best features, not hiding behind alterations. And that’s why I decided to go back to wearing mascara.

I’m proud of my eyelashes, and I want to accentuate them. I want people to notice the things about me that I like about myself. That holds true for everything, from physical appearance to inner personality and character traits. So yes, it is a type of vanity that causes me to wear makeup on most days of the week. It’s vain because I do it to make myself look attractive in the judgemental eyes of society. And yes, most of the eyes who notice and judge based on mascara are female. But it’s a vanity I can accept because I derive confidence from knowing that it’s the parts of myself I personally find attractive which I show off to society. I now wear makeup when I want to, not because I feel like I have to.

All of this was to say that I recommend everyone, whether a habitual makeup-wearer or not, spend some time thinking seriously about personal grooming habits. I’m not in a position to tell anyone that they should change their habits, especially since I’m not even done with fully coming to terms with my own. But I do encourage challenging yourself by suspending a habit you feel obligated to perform. It leads you to question why you feel that obligation. That introspection can lead to greater self-awareness, which in turn leads to great comfort with yourself and with society’s view of yourself. So even if you end up going back to the habit, you do so consciously.

Carrie Connelly is a junior in the College. She likes running, flannels, and puns.

Looking to the Stars: D.C.’s Only UFO Investigator
Drawing Dissent: Defining the Art of Change in the Age of Trump