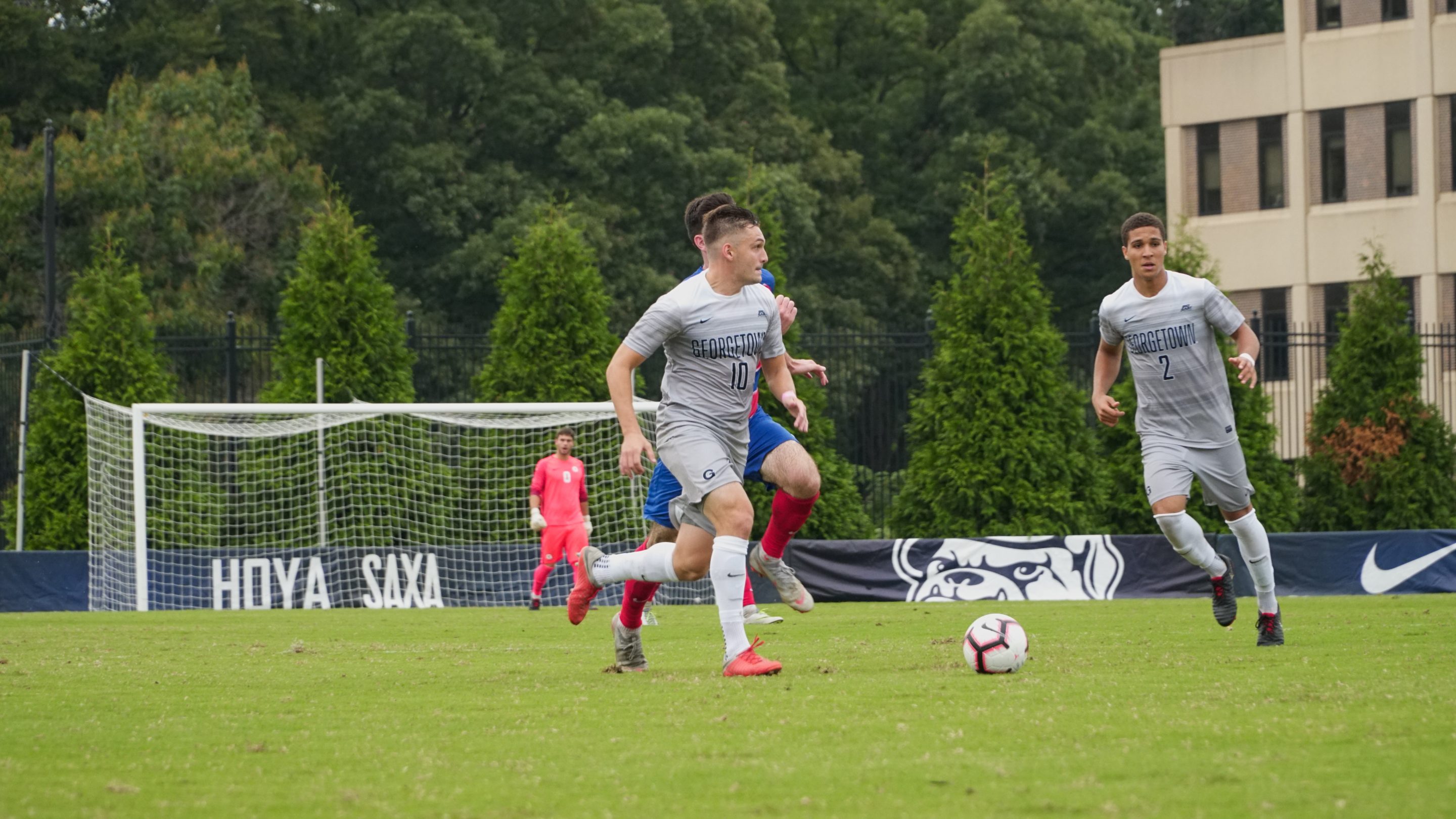 The Hoyas began brightly, putting the Friars under pressure from the start. Zajec swung an early free kick in for senior defender Brendan McDonough, who couldn’t get a clean header away. In the 17th minute, junior defender Dylan Nealis created space on the right wing to find sophomore forward Derek Dodson, whose shot was blocked. On Nealis’ next touch of the ball, Providence’s redshirt senior midfielder/forward Klisman Sousa clattered through the back of him and was the first player booked by the referee on a hotly-contested afternoon. Redshirt sophomore defender Tristan Stowell joined his teammate in the book four minutes later, dangerously taking Dodson down just outside the penalty area.

Zajec missed the target from the following free kick, but made amends in the 30th minute after Sousa’s handball in the area. Zajec blasted the penalty into the bottom left corner, giving his team a 1-0 advantage that the team would take into the break, but not without sacrifices. Dodson, who leads the team with nine goals on the season, went down in the 31st minute with an apparent muscle issue, which the forward tried to run off on the sideline, but he was unable to return to the match.

“We’ve got some good depth [at forward], some young depth. You see [freshman forward] Luke Kiley giving some minutes and [freshman midfielder/forward] Zach Riviere and Riley Strassner,” head coach Brian Wiese said. “Derek’s a piece you don’t want to not have available, but that’s why we have a good athletic training staff, and we spent all this money on the Thompson Center to get those facilities to get him to be able to play on Sunday.”

The Friars came out with fire after the break but were unable to put any pressure on freshman goalkeeper Giannis Nikopolidis’ goal, only forcing one save from the Georgetown goalkeeper the whole match.

“In some regards, you knew you were going to have to endure a good push by them, and I really think our back four, in general, was really good today,” Wiese said. “[Giannis] had some things to do, but the things that we did deal with, we dealt with pretty well.”

The Hoyas still had the best chances, with junior forward Achara outmuscling his defender before pulling his shot wide from the edge of the box in the 56th minute. Strassner would strike three minutes later though. Nealis beat his defender to the ball before clipping a cross into Strassner. The initial header was saved by redshirt senior goalkeeper Colin Miller, but the rebound fell back to Strassner who slotted it home for 2-0.

The physicality of the game came back in the 69th minute, when Providence freshman forward Gil Santos was sent off for a studs up challenge on Zajec. Achara was booked for dissent after the play, and Zajec went into the book in the 75th minute for push after the ball was out of play. Yet, instead of being pulled into a war of attrition, the Hoyas put the game to bed five minutes later.

Strassner played a through ball to sophomore midfielder/defender Foster McCune who unselfishly played the ball back across goal for Lochner. Miller got across his goal to make a great save on the first attempt, but as the ball squeezed through the goalkeeper, Lochner was the first onto the rebound, stabbing it in from a tight angle. In the same minute, Montes played a ball forward to Lochner. Stowell lost his footing trying to intercept the pass, and Lochner calmly chipped the ball over the onrushing Miller to make it 4-0.

“I had the easiest job on the field on both of those plays. I just ran straight,” Lochner said.

The Hoyas will host Marquette (7-8-2, 5-3-1 Big East) in the championship game on Sunday at 2 p.m. ET at the home of the highest seed. For updates, as well as coverage for the rest of Georgetown’s sports, follow @GUVoiceSports on Twitter. 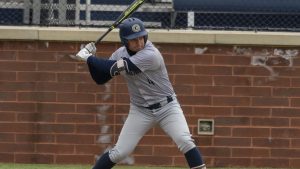 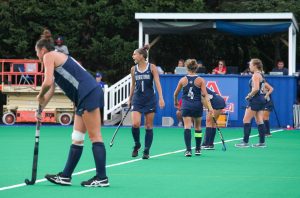