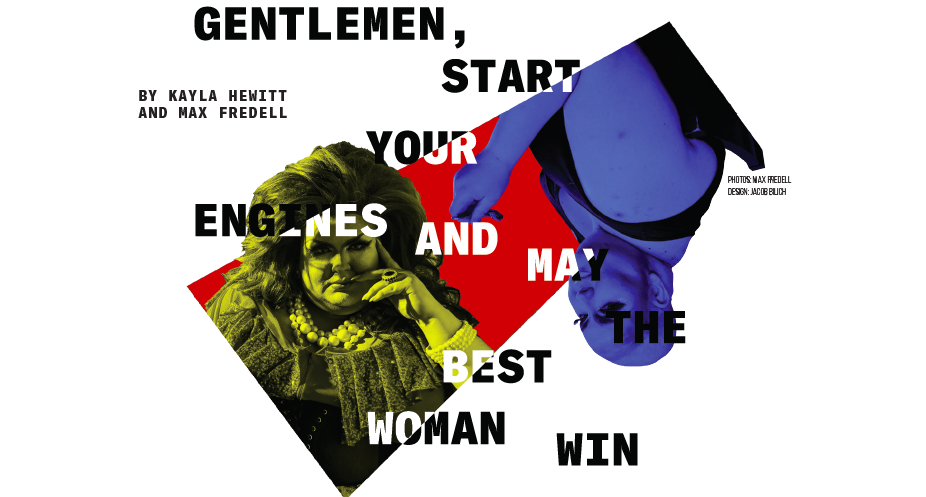 “It’s a high heel race, not a sensible wedge trot,” a drag queen shouted to the crowd on an unseasonably warm October evening.

It was the 32nd Annual 17th Street High Heel Race presented by Mayor Muriel Bowser. D.C. residents gathered to watch as people dressed in drag or Halloween costumes strutted down 17th. Spectators lined the streets, some toting small children on their backs, some donning a pair of pumps with sensible suits, while police officers stood stoically at the fringes. This year marked the beginning of a new era for the race. What was once a tawdry celebration for a few drag queens has become an official event run by the city and attended by thousands. An informal space has transitioned into a formal one.

The race got its start on Halloween night in 1986, when a group of drunken drag queens gathered and started an impromptu dash between restaurants. Over the years, as the event grew, it moved to the night before Halloween to avoid congestion, and the police began to help block off and shut down the street.

As the race increased in size, so did the hurdles organizers had to jump through to hold it. First, the city started requiring permits and fees for police presence. In 2011, to lessen the financial burden, the D.C. government began contributing funds. In 2017, the city became an official sponsor; Bowser added her name to the event this year.

“I think that in some ways this is part of the larger cultural shift in the community,” said Ben de Guzman, the community outreach relations specialist for the mayor’s office of LGBTQ affairs, of the government’s adoption of the race. For de Guzman, this shift is the culmination of years of work by the LGBTQ community. “This is reflective of the victories that our community has fought for, and it indicates the extent to which we have become part of the body politic.”

About six months ago, on any given weekend, some of the participants at the race could have been found at Town, the former gay bar in Shaw. Town featured weekly drag shows, with all the perfume, loose dollar bills, and fake boobs that come with the atmosphere of a traditional drag show.

Town’s success helped draw a whiter, wealthier demographic to Shaw. Eventually, the changing area became too expensive for those who had been living there, and the venue’s landlord sold the property to make way for new, upscale apartments.

“Town was monumental,” said drag queen Kristina Kelly. “Now people are still trying to find their place, their next home until something else opens up.”

For others, however, the bar was not so welcoming. “The closing of Town is a big deal for a lot of people, but honestly I never felt comfortable there. Even as a patron, it was tough,” said Jorge Escobar, who identifies as a black queer person, and is a member of D.C.’s only drag king troupe, Pretty Boi Drag. “I’ve performed at Town a couple times and it was not fun. It was like cis gay men don’t want to see drag kings, and they are the loudest proponents of the queer community.”

“[Town] pretty much used the gay community to make that place [Shaw] more viable. Gays are the frontrunner of gentrification. Wherever I move, there are some white people that follow me. White gays that are following me,” they added.

On the northeast edge of the city, the D.C. Eagle has become a new home for weekly drag shows. Lit on all sides with rainbow floodlights, the gay nightclub stands out from the darkened skyline like the fabulous factory that it is.

A few nights after the race, a crowd of locals gathered for the Friday night drag show. The show coincided with the weekly WOOF! Happy Hour at the D.C. Eagle, an opportunity for members of the leather community—a subset of the BDSM community who express sexual desires by wearing leather garments—to gather. Patrons used a darkened space in the back of the club next to a set of well-worn pool tables to change out of their day clothes into harnesses and vented leather chaps before making their way upstairs to the show. Throughout the night, the evening’s emcee, Ba’Naka, playfully invited the group to the dance floor.

For those uninitiated to drag shows, they have a particular decorum. Ba’Naka introduces the rules before every show: You must shout, you must clap, and you really must tip your queens. That night, she toyed with the audience like a lioness with her prey, queen of the sweaty, pulsating room. Ba’Naka said she uses drag as therapy; for her, drag is a conduit to explore emotion. She asked couples to embrace, brought out men in leather for questioning, and rubbed fake breasts against those of a female spectator.

It took a moment for Ba’Naka to introduce the queens, and the crowd slowly grew restless. Suddenly, the first song began, mellow synthesizers peaked through the speakers, crackling a bit. It was a female cover of Michael Jackson’s “Man in the Mirror.”

She stepped out, toned leg by toned leg, slowly and elegantly, and the crowd lost its mind: This was Evon Michelle. She is new to the D.C. scene, a transplant from Florida and a classically trained vocalist. Men came forward on all fours, presenting cash clasped tightly in their teeth. Others simply waved their bills in the air to be collected by Evon mid-strut. After the show, Evon said she hopes to subvert the expectations for black drag queens, refusing to perform Beyoncé songs with an ombre wig. Her performance was regal, with an intentionally quiet power.

When asked about how drag is used to play with gender, Ba’Naka referenced an old RuPaul proverb: “We’re all born naked, the rest is drag.” At the D.C. Eagle, this adage rang true. One queen performed without fake breasts, embracing androgyny in her performance to the tune of the Kim Possible theme song. Others chose to play with more traditional expressions of femininity, with one queen painting her lips with shimmering red lipstick and draping her shoulders with a cape to match.

For Zach Landenhur, a member of Pretty Boi Drag, drag is a way to more fully understand himself. “I was struggling with some identity issues. Not just gender identity, sexual identity, that type of thing but just identity difficulties and struggles in general,” he said. “I’m trying now to find more of the in between as opposed to, ‘this is what masculine is and this is what feminine is.’ I think it’s okay to be in between those areas.”

Once a week, the kings gather at The Bier Baron Tavern, less than a 15-minute walk away from the site of the High Heel Race. As Zach spoke, his fellow drag kings—a mix of female-identifying, male-identifying, and non-binary individuals—prepared for their show. They bounced ideas off one another and stumbled through their yet-to-be-learned lyrics. On Sunday mornings, the bar becomes a place where the kings can collaborate, commune, rehearse, and perform.

Phoenix King, another member of Pretty Boi Drag, said drag can be used to challenge the gender binary. “Before drag was ‘you are a woman dressing up as man, or you’re a man dressing up as a woman,’” Phoenix said. “Now it’s just like people getting on stage in full drag queen makeup and glitter beards and pulling out genitalia and saying, ‘fuck you’ to gender, and it’s really awesome because it wasn’t around even two years ago.”

Phoenix’s fellow king, Sebastian Katz, echoed this sentiment. He described how drag gives kings the space to play with the presentation of masculinity by wearing lipstick or declining to bind their chests. “That’s still a valid expression of being a drag king,” said Katz.

For Zach, drag is liberation from the assumptions of others. “I used to get really, really upset when people would, what I thought at the time was misgendering me,” he said. Using drag, Zach became more comfortable with their own expression of gender. “Now it’s like people call me sir, people call me ma’am, as outdated as that is, either way I’m okay now because I’ve become okay in this space.”

Jorge does not believe that the High Heel Race is such a space: A majority-straight audience lined the streets, many leaning over the rails of outdoor bars, small-batch IPAs in hand, watching people dressed in femme attire.

“The high heel race can be transphobic depending on the way you do it,” Jorge said. “When it’s, ‘Look at me I’m in a dress and high heels,’ you’re poking fun at somebody’s life, somebody who has to put on high heels and a dress to present as a woman to the world that doesn’t accept the fact that they are a woman.”

“That can be painful to somebody who’s living a life that you’re making fun of,” they continued. “And when a large face [like Bowser] puts their name on something like this, it solidifies that it’s something to make fun of.”

But for some in the drag community, such as drag queen Ba’Naka, the government’s adoption of the race is something to be celebrated. Ba’Naka believes it is a sign that drag has come out of the shadows.

“The acceptance of your community and your world far more outweighs the excitement of doing something dirty,” she said.“So if drag is no longer dirty, if it’s here with these beautiful—there are kids in costumes watching drag queens, you don’t get that. You never get that, so I love it now.”

Others, including Phoenix King, take issue with the presence of the police at the race and other events celebrating members of the LGBTQ community.

There was momentary confusion before the real race began. The clock struck 9 p.m., and a horn sounded to corral the runners. Instead, someone jumped the start, and the race began as the rest of the participants tried to catch up. Some sprinted, while others took their time, strutting elegantly. A hairier Theresa May made their way down 17th Street quite leisurely.

After the race, queens wandered at the bottom of 17th Street. Queen Bambi, a drag queen and former participant, lamented the police shepherding at the end of the race. “Usually it ends and you can mill about and go get a drink, but we couldn’t move down here for 25-30 minutes. So that’s regulation, I guess. We’ve been over-regulated.”

When reflecting on the packaging of drag events for a wider audience, Jorge pointed out a salient contradiction. “I think it’s important for us to showcase our bodies, to be out there in the world and show the community at large that we matter. We are here and we matter. We have a voice and you ought to listen to us,” they said. However, they noted the complication that comes with advertising queer bodies. “A lot of us have queer or trans bodies, and they don’t necessarily fit, like, ‘I’m gonna put this on a poster and hand it out to people,’” Jorge said.

Mayor Bowser’s office now controls this event. The government has delivered its rubber stamp of approval, and it is no longer the back alley race it once was. However, in the same way that Jorge is uncomfortable with the permanence of a simple poster encapsulating drag as it intersects with the complexity of queerness, a final rubber stamp may come into conflict with something as nebulous as drag. We know that complication extends to the Voice as well.

The printed word can seem to provide conclusions when, outside, the conversation continues. Whether expressed through government approval or even deadline-driven media coverage, drag resists easy definition. It evades finality. 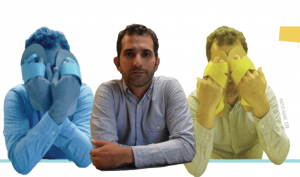