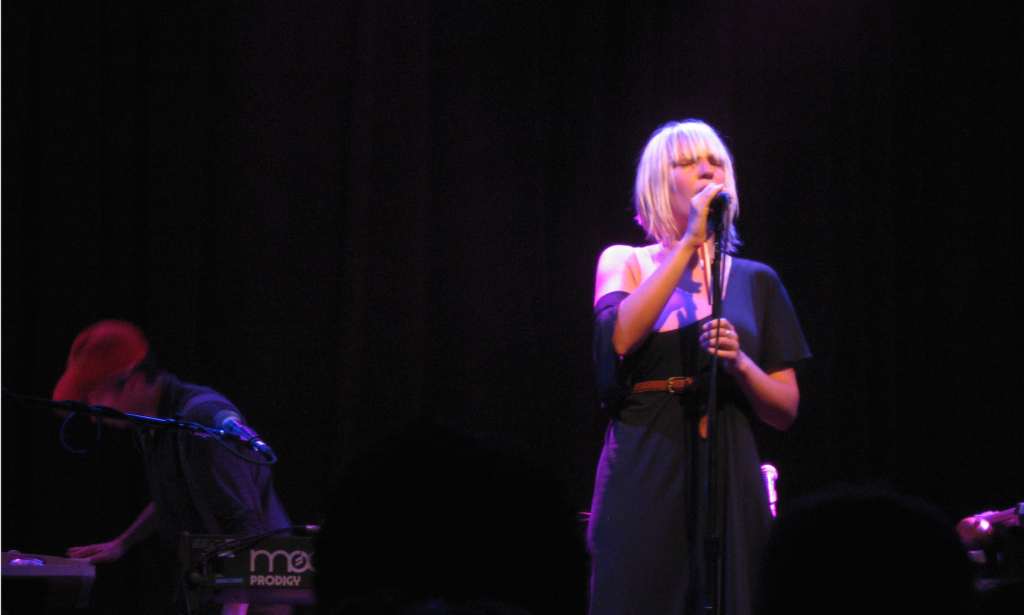 I should have known better than to be skeptical at the idea of Sia creating a Christmas album. It is certainly not unusual for current pop royalty to attempt to cash in on the pre-Giving Season consumerism frenzy by releasing their own holiday collections: Ariana Grande has Christmas & Chill, Justin Bieber has Under the Mistletoe, and Mariah Carey, of course, has Merry Christmas II You. These albums often feature a mix of covers of traditional holiday tunes and appropriately-themed original songs by the artist. Most of the latter tend to be standard love songs with the words “Christmas” and “North Pole” worked in amongst general references to snow. Given that this prevailing trend defined my idea of the modern Christmas album, I couldn’t help but be a little confused when I first saw Sia’s bright red and green wrapping paper explosion of an album cover. Sia’s signature slurred vocals, usually downtempo songs, and profound, sometimes even dark, lyrics did not seem to fit the mold of the mainstream pop princess Christmas album. Indeed, this thankfully and wonderfully turned out to be true.

Everyday Is Christmas (Deluxe) combines Sia’s thought-provoking lyrics and her prowess as a pop producer to create a surprisingly timeless and enjoyable holiday album. The album’s first song and lead-off single “Santa’s Coming For Us” lets the listener know immediately that this will not be an album comprised merely of cute love songs that sometimes mention winter things; this is an album completely and unabashedly dedicated to Christmas. “Santa’s Coming For Us” features bubbly background vocals and expertly produced jingle and church bell instrumentals to form a joyous statement holiday tune that boldly declares: “Singing to the deer in the sky/Singing as they jingle, jingle, jingle tonight… Sing your heart out with all of your love/Santa’s coming for us.” While this song will undeniably leave one filled with happy Christmas cheer, Sia makes sure not to let it stray too far from her signature profound style by having the song revolve around the purposefully ambiguous lyric, “Santa’s coming for us,” which can either be a cause for celebration or fear. This theme of intense holiday cheer is echoed in the album’s next song “Candy Cane Lane”, which again presents an upbeat, expertly produced track  this time about the beauty of many colorful candy canes and the joy of friendship.

The album returns to Sia’s signature sound in its third song “Snowman”. With a backing piano track that is extremely reminiscent of her ballad “Straight for the Knife” from 1000 Forms of Fear (2014), Sia uses extremely clever lyricism to describe a fraught relationship with a snowman: “I want you to know that I’m never leaving/Cause I’m Mrs. Snow, ’till death we’ll be freezing.” Sia clearly sings with a pain evoked from real past relationship experience. However, the song is completely conveyed in metaphor, which serves to both continue adherence to the holiday theme, as well as give the audience an elevated idea of the difficulties of being in love with someone is is literally and figuratively made of ice: “Don’t cry snowman, don’t you fear the sun/Who’ll carry me without legs to run, honey? . . . Don’t cry, snowman, don’t you shed a tear/Who’ll hear my secrets if you don’t have ears, baby?”

“Ho Ho Ho” uses expert sound production to give the impression of a wind-up toy losing control. The repetitive plucking piano loop combined with sliding brass accents, glass-shattering, and whistle sound effects show how a fun night of drinking with friends around the holidays can soon get out of hand, like a brand new Christmas toy that malfunctions.

“Puppies Are Forever” is an extremely ambitious song. As the most upbeat and driving track on the album, the song describes the joy of seeing a puppy in a window and wanting it to be your best friend. The chorus, again produced with signature Christmas-sounding church bells in the background, explains, “Puppies are forever, not just for Christmas/Cause they’re so cute and fluffy with shiny coats/But will you love them when they’re old and slow?” Sia has long been involved in animal rights activism, and this song acts as a Public Service Announcement for the serious responsibility of becoming a pet owner. Overall, however, the sense of joy that the instrumentation creates, coupled with the words “puppies are forever,” which can be an incredibly positive statement instead of just a warning, makes this song fun to listen to while still keeping its message intact.

Sia rounds out the original version of the album with the statement song “Underneath the Mistletoe”. While Christmas songs based on the idea of kissing someone under the mistletoe are, by now, pretty wrung tropes, Sia bring her own flair to this one. This track is an honest, powerful ballad about being hopelessly in love. The vast extent of emotion is shown in the pre chorus: “It’s Christmas time, so run for your life/Oh Hallelujah/A snowy night, a woman on fire/I’m waiting for you.” The driving drum beat combined with twinkling triangle instrumentals conveys a sense of hope and longing.

Sia is clearly a shrewd businesswoman, which is why she decided to re-release her Christmas album in time for a second holiday season. However, her clever calculation is almost annoyingly apparent in the fact that most of her four new additional songs seem forced and lack the dimension of those in the original album. “Underneath the Christmas Lights” is a slow and repetitive love ballad that is, unfortunately, too reminiscent of its undoubtedly better counterpart “Underneath the Mistletoe.” “Round and Round”, a joyful song about family and friendship, is supposed to evoke the zeitgeist of the holiday season, but while this is all nice – there is nothing concretely tying the song to the album’s theme. The song fails to mention anything Christmas-related; there is, instead, a lyrical focus on a wheel that spins “round, round, round.” This causes it to stand out from every other track, making its inclusion in the album seem insincere. “Sing For My Life” falls into the trope of holiday songs that are simply unrelated to the theme of Christmas, featuring only a few key buzzwords. It would have made much more sense if Sia had just decided to work this song (minus the “north poles”) into her next album. However, the last additional song, “My Old Santa Claus”, is as powerful as the original LP. Over an upbeat melody supported by jingle bells, Sia describes longing for a lover— her Santa Claus— who has left: “Well, if this is what the season is bringing then I gotta shoot through… ‘Cause if Christmas is so green and so red then why am I so blue?”

Ultimately, Everyday Is Christmas (Deluxe) should be a staple for sounds of the holiday season. The album is timeless, unpretentious, joyful, but still lyrically and sonically interesting. Only Sia’s ear for production and clever lyricism could create a Christmas LP that is so enjoyable without being either tacky or cautiously bland. In Everyday Is Christmas (Deluxe), we see the makings of a modern classic.