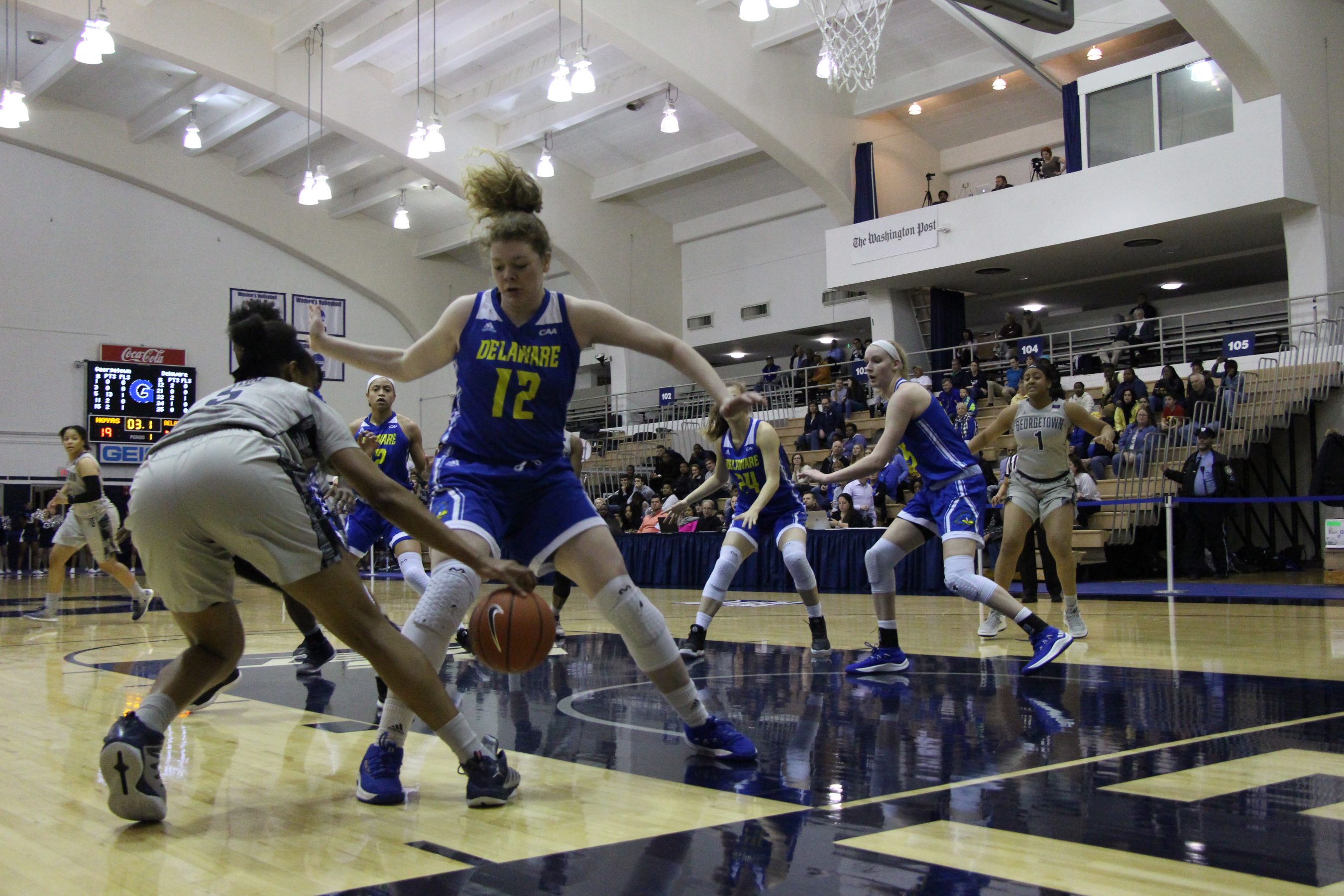 Smalls started the game hot, going on a solo 5-0 run to open the contest. Georgetown wouldn’t score until the 6:38 mark, when White went 1-2 from the free throw line. That kickstarted an 8-0 Hoyas run, ending with Venson’s 3-pointer, with 4:08 remaining in the quarter. Benitez hit her first three of the night in response, and after Cooper-Williams went 1-2 from the line, White finished the first period with a jumper to put Georgetown up 10-9.

The first five minutes of the second quarter featured three lead changes and two ties, and after Benitez and Venson again traded threes, graduate student guard Dorothy Adomako made a free throw to put the Hoyas ahead by one. After a JMU layup, Benitez and Venson again traded threes, but this time, Barrier followed up with a triple of her own to put the Dukes up 24-20 with 1:57 left in the quarter. The Dukes stretched the lead out to six less than a minute later, but White scored four straight points to bring the score back to 27-25 with 46 seconds until halftime. The Dukes would respond, however, and went into the break leading 30-25.

The Hoyas struggled from the field, shooting just 25.8 percent, and the free throw struggles continued with a 60 percent clip. JMU held the rebounding advantage 23-20, and the Dukes got production from their bench as well with 11 points compared to Georgetown’s three.

The Hoyas looked to regain control of the game in the third quarter, though, starting on a 5-0 run that levelled the scores at 30. A White and-one took gave Georgetown the lead with 6:43 to go in the quarter, but JMU sandwiched a Venson jumper with threes from Benitez and Barrier to go up by three. The Hoyas fought back, and a free throw from White gave Georgetown a 42-41 advantage with 2:16 left in the third, but the teams would trade baskets the rest of the quarter and the Dukes scored last, taking a 45-44 lead into the final frame.

The Dukes opened the fourth with a Benitez layup, which Adomako answered with a jumper. After Cooper-Williams out-hustled the Hoyas for an offensive rebound, Adomako made a chasedown block on Smalls to keep the score 47-46. The Hoyas couldn’t capitalize, and at the 6:35 mark, Smalls hit two free throws to give JMU it’s largest lead of the game to that point, at 53-46. Smalls, the Duke’s leading scorer on the season, began to heat up offensively and her layup with 4:36 to go made the score 59-50. The game looked to swing on a layup by sophomore center Breonna Mayfield and an extra possession after White drew a foul, but the Hoyas couldn’t capitalize on the opportunity, and Cooper-Williams went 3-4 on two trips to the line to extend the JMU lead to double digits. White hit a 3-pointer with 2:29 remaining, and the Hoyas came out in a press, but the Dukes calmly dealt with Georgetown’s defense for Barrier to splash a three from the corner. The Hoyas tried to rally behind two Venson free throws, but Smalls hit a dagger 3-pointer with 1:34 to go after a Cooper-Williams offensive rebound to make it 68-57. Cooper-Williams hit one more free throw before the game’s conclusion, and after a White miss, the Dukes dribbled out the clock for the victory.

The Hoyas return to McDonough Arena on Monday, where they’ll look to bounce back against Pittsburgh (2-2, ACC). Tip-off is slated for 7 p.m. ET. For live coverage of that game, as well as updates for all of Georgetown’s teams, follow @GUVoiceSports on Twitter. 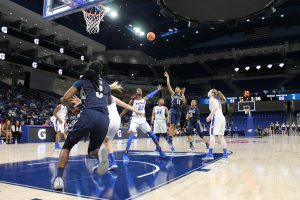