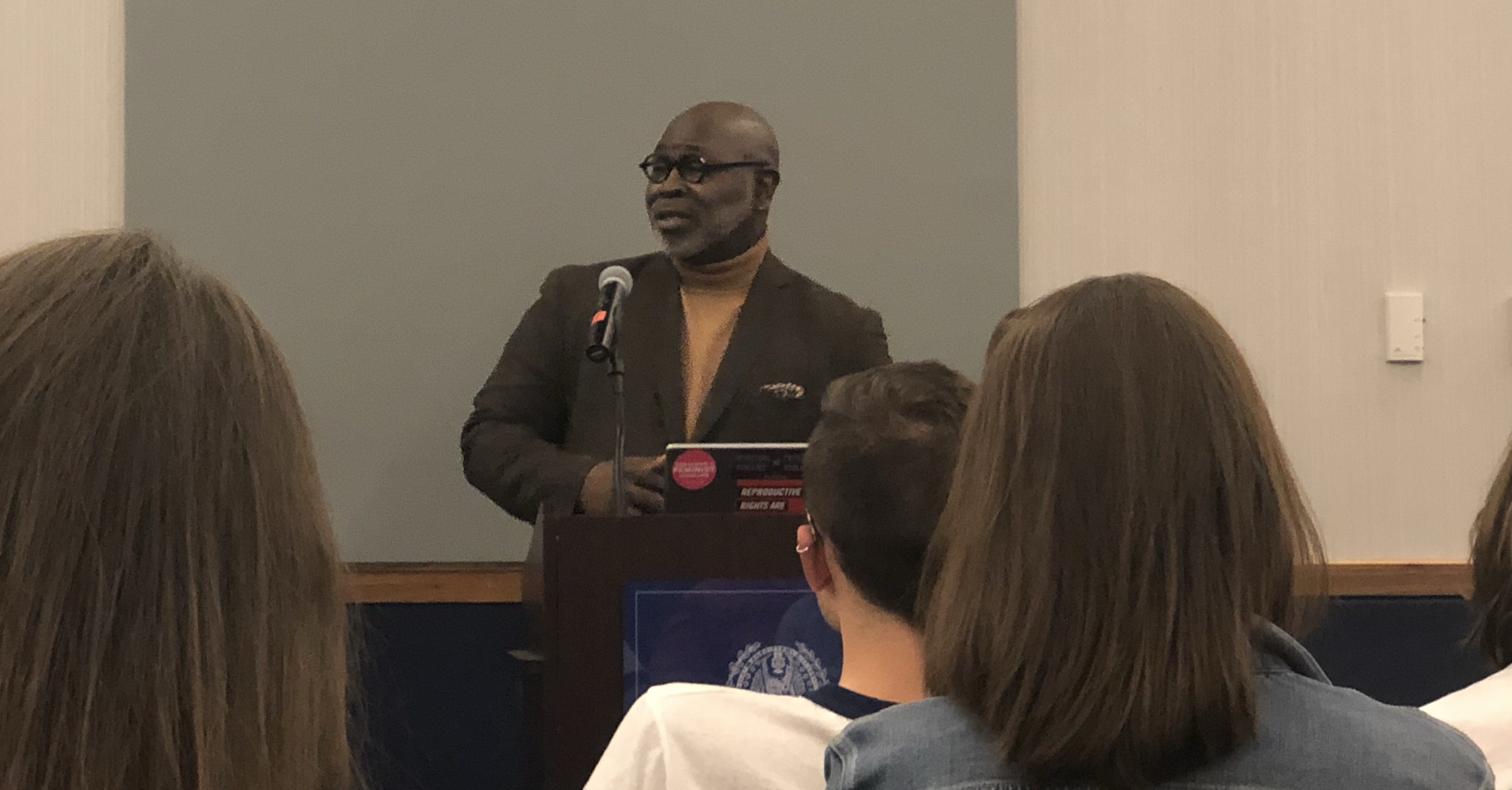 Dr. Willie Parker, a practicing OB/GYN who has specialized in abortions for the past 20 years, gave a lecture in the HFSC Social Room on Jan. 16 at an event co-sponsored by H*yas for Choice and Georgetown University College Democrats.

Parker performs abortions mostly in southern states—namely Alabama, Mississippi, and Georgia—where there are not many abortions clinics, and where state restrictions make it difficult for those wanting an abortion get one.

Parker asserted that while many think it is hard for women in the south to receive abortions, he believes that due to the current state of women’s reproductive health in the United States, south should be defined the way as Malcolm X did: everything below the Canadian border.

Early in his career, Parker was not performing abortions, and he said that he had to wrestle with his identity and his conscience for twelve years before coming to the realization that he should do more for women. “I was unsettled by what my role should be in terms of providing this care,” Parker said. “I grew uncomfortable not providing abortions when I knew what women faced when those services were not available.”

Parker then spoke about the different stories he has seen from the women asking for abortions, ranging from a thirty five year old mother of five to a fifteen year old girl.

“Contrary to the perception that is often created around people who choose to have abortions, for these women, this was not a matter of convenience, but a matter of necessity,” Parker said. “And that necessity is no less now than it was when I started providing care.”

During the event, there was an opportunity for several students to ask Parker questions. One asked whether Parker believed if late term and partial birth abortions should be made legal, to which Parker stated that the term “partial birth abortion” was a politicized term, and not a medical term, and that the graphic descriptions of the procedure were written intentionally to make the procedure sound worse than it is.

“If someone had a moral objection to taking someone’s leg off, they would describe very graphically how that leg was removed to create a sentiment that this is something inhumane or barbarian,” Parker said.

Parker was then asked whether he believed if fetuses had the same rights as women, and he answered the question by asserting that it was a very subjective matter as to when, or even if, a fetus was considered a human and had the same rights as a woman. To Parker, the different stages of development mattered the most.

“Is a tadpole a frog? Is an acorn an oak tree? They have the exact same genetic composition of what they eventually end up as.” Parker said. “But a tadpole is not a frog, and an acorn is not an oak tree. Hence, the moral significance of stepping on an acorn is not the same as chopping down a 100 year old oak tree.”

Outside of the event, Georgetown’s pro-life group, GU Right to Life, had set up a table and were handing out cards titled “Abortion. A Simple Procedure?” that were produced by the organization Students for Life of America. On the back of the cards, there were five different abortion procedures and their descriptions, ranging from the “abortion pill” to late term abortion.

GU Right to Life president Caroline Willcox (COL ’19) said that the organization was distributing cards so that those who are pro-life have their voices heard on campus.

“We wanted to be out here to be a voice for what was clearly not represented inside.” Willcox said. “We strongly oppose what he [Dr. Parker] does and how he tries to normalize the killing of the pre-born. We want to make sure that the pro-life voice is heard on this campus and that people are able to see that not every student here believes that we need to kill in order to have equality.”

At the end of the lecture, Parker urged the students to have faith in what they believe in, and to always keep on striving towards the world they want to be.

“Even in moments like this, we still have to have make this world the way we want it to be. Parker said. “I ask you to imagine if Dr. Martin Luther King Jr. said: ‘People keep electing racists, bombing our churches, using water hoses and dogs on us and jailing us for pursuing human and civil rights. It’s just not worth it to keep trying.’ If Dr. King had said that, there are many of us who would still be riding on the back of the bus today.”