This past week, Dorothy Adomako had arguably her best stretch on the hardwood of her Georgetown career. First, the graduate student guard was the lone bright spot for the Hoyas during a difficult 72-62 loss to Marquette last Sunday, going for 21 points, six rebounds, and two blocks. Then, on Saturday, Adomako scored a career-high 28 points to go along with 11 rebounds, a block, and a steal, as the Hoyas put together a late comeback to steal a win over rival Villanova. Adomako was key down the stretch of that game on both sides of the ball and scored the bucket that gave Georgetown the lead in the fourth quarter after being down by as much as eight earlier in the period. After missing all of last season due to injury, Adomako has come roaring back in her final year on the Hilltop and re-established herself as one of the Hoyas’ elite guards along with Dionna White and Mikayla Venson.

Both the men’s and women’s swimming and diving teams competed against Drexel on Saturday afternoon in Philadelphia. On the men’s side, freshman Michael Wheeler kicked things off with a dominant display in the 1,000-yard freestyle. The 18-year-old out of Lafayette, CA finished in 9:33.78 to win the race 18 seconds ahead of the second place Drexel swimmer. A 1,000-yard specialist, Wheeler’s finish on Saturday was just six seconds off his personal record set back in his senior year of high school. He will look to build on that performance in Georgetown’s next meet at Seton Hall on February 2.

On the diving boards, another California native was in control for the women’s team. Riley Fujioka, a sophomore from Los Altos, took both the 1-meter and 3-meter dives with huge scores in each. She started her afternoon with a 282.07 in the 1-meter, edging out the second place Drexel diver by just five points. Later on, she would return for the 3-meter event and dominated the competition with a score of 293.93, over 33 points ahead of the next highest finisher. It was a remarkable individual performance for Fujioka as she set career-highs in points for both events and notched her first two victories since November 3, when she took first place in the 3-meter event against Villanova.

Despite Georgetown’s 74-71 defeat to No. 15 Marquette on Tuesday, Mac McClung had his most efficient shooting game of the season (7-of-11 from the field) and led the Hoyas with 24 points. With Marquette’s star junior guard Markus Howard playing just three minutes due to injury, McClung took advantage and put his full range of scoring abilities on display. McClung demonstrated his top-notch driving ability with a variety of layups around the rim and tied his season-high with four 3-pointers. Many questioned the freshman’s perimeter shooting ability when he had no threes in his first four games despite 14 attempts, but those concerns have been put to rest with his recent performances. He has gone 10 of his last 21 from behind the arc and his scoring average has increased to 13.4 points per game as a result. 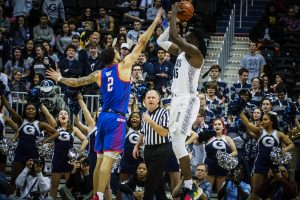