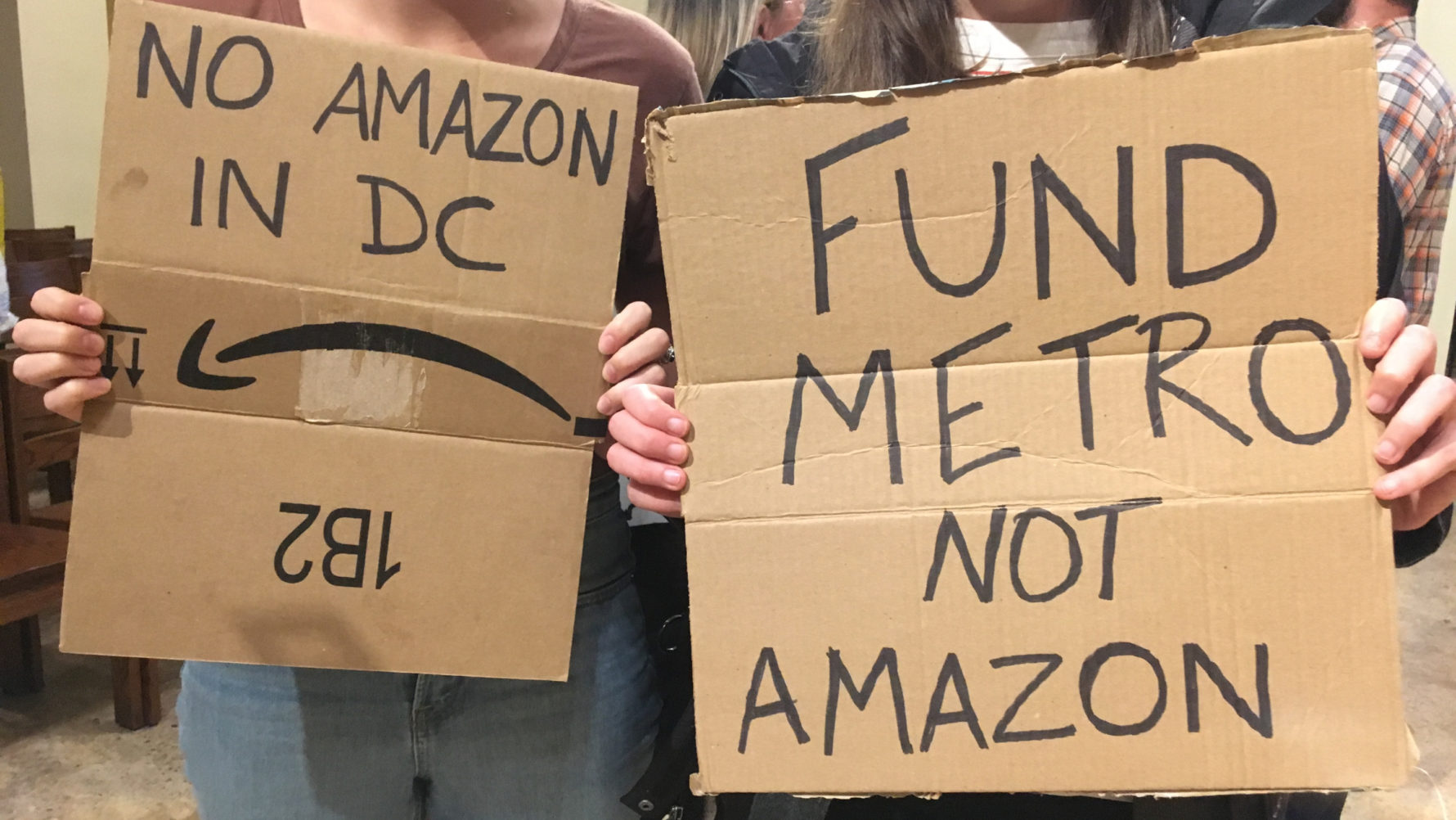 A grassroots coalition called “For Us, Not Amazon” held a forum attended by approximately 100 community members at Café Sazón in Arlington on Feb. 19. The organizers called for Northern Virginia’s politicians to reject Amazon’s planned second headquarters amid concerns about corporate power, lack of transparency, and displacement of low-income and minority residents in the region.

Coming on the heels of successful community pushback in New York, the Arlington activists expressed opposition to the generous incentives offered to Amazon by the Virginia government. Under the terms of the HQ2 deal, in return for creating 25,000 jobs, Amazon will receive $573 million in state incentives in a package many at the forum saw as excessive.

A common theme of the forum was skepticism toward the notion that Amazon, which reached a market cap of $1 trillion in Sept. 2018, would need public money at all. The activists focused their criticism on Arlington County’s plan to give Amazon a $23 million cash grant to be paid out over 15 years. The incentive package would consist of funds from the county’s tax on hotel rooms, known as the Transient Occupancy Tax.

“If Amazon chooses not to come to Arlington over $23 million, good riddance,” said Roshan Abraham, an organizer with Our Revolution Arlington. “Arlington on the other hand … we have a $20 million shortage just for next year. That’s significant money for us.”

Danny Cendejas, an activist with Latinx advocacy group La ColectiVA, echoed a similar sentiment. “How can money be given to one of the wealthiest companies in the world when we have real social needs that should be prioritized?” he asked.

The activists touched upon gentrification, one of the main concerns among community members and organizers. Abraham pushed back on the idea that HQ2 would bring benefits to everyone in the community, explaining that the arrival of thousands of highly-paid engineers and programmers would likely raise property prices and exacerbate the problems many low-income tenants have in paying rent.

“People say a rising tide raises all ships. That only happens if you are above water. For a lot of people already drowning or under water, that rising tide only makes their life much worse,” Abraham said.

In particular, rising rent would likely push many Latinx and minority residents out of their homes, noted Cendejas. “We are asking the county to vote that incentive down and invest in preventing displacement, because there are communities in Arlington that are going to be negatively impacted by this,” he said. “We want to preserve our communities.”

Cendejas also discussed concerns over the perceived lack of public input in the deal between politicians and the online conglomerate, which he described as being negotiated behind closed doors. Specifically, he called for greater transparency from Arlington officials and Amazon over the plans and potential effects of HQ2.

“We need to do a lot of work to make sure that the people who are going to be most harmed by this potential opening are centered in the decision-making that our county does,” Cendejas said.

Amazon’s controversial decision to provide facial-recognition software for Immigration and Customs Enforcement (ICE) crackdowns was also on the minds of many of the forum’s attendees. Describing Arlington’s status as a “sanctuary city” and detailing the community’s history of supporting immigrants, Abraham had a message for the technology company: “If you are going to come here, you have got to end your contract with ICE.”

In their parting words to community members, organizers conveyed their hope that Amazon would refrain from heavy-handed tactics and instead talk directly with the residents who will be affected by the HQ2 development. “What we’d like to see is Amazon working with the community, instead of merely demanding to get it their way or no way at all,” Abraham said.