The Voice published its first issue on March 4, 1969. To celebrate, we’re re-publishing articles about previous anniversaries we’ve found in our archives. In this piece, the first editorial board writes a short reflection on the first year of the Voice.

By the Editorial Board for the Voice‘s 3-month anniversary

The nearly complete academic year 1968-1969 has been marked by controversy and change in this institution. Student activism and concern have never rise to such a level at Georgetown as they have during this past year.

The Georgetown student has witnessed peaceful sit-ins and violent disruption. Often he has not agreed with the activists, and at times he has been angered by their actions. But he has been shaken out of his complacency and has been forced to respond and reflect. He can no longer feel comfortable, but that previous comfort was only an illusion anyway.

The Georgetown Voice was born amidst the new activism. As a new publication, we had to face many problems; and we made mistakes. We have not been satisfied with our performance, and hopefully we never will be. We have tried to present news of national scope and to reflect on student life. We are grateful for the encouraging response we have received from the university community.

We believe that a newspaper should be the conscience of the community, and a conscience must not fear controversy. We believe we have a duty to comfort the afflicted and afflict the comfortable. We will continue to speak out for programs we have supported this year. Above all, we shall not become complacent. 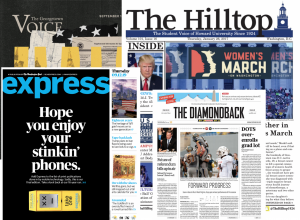