By Alex Lewontin and Nick Gavio 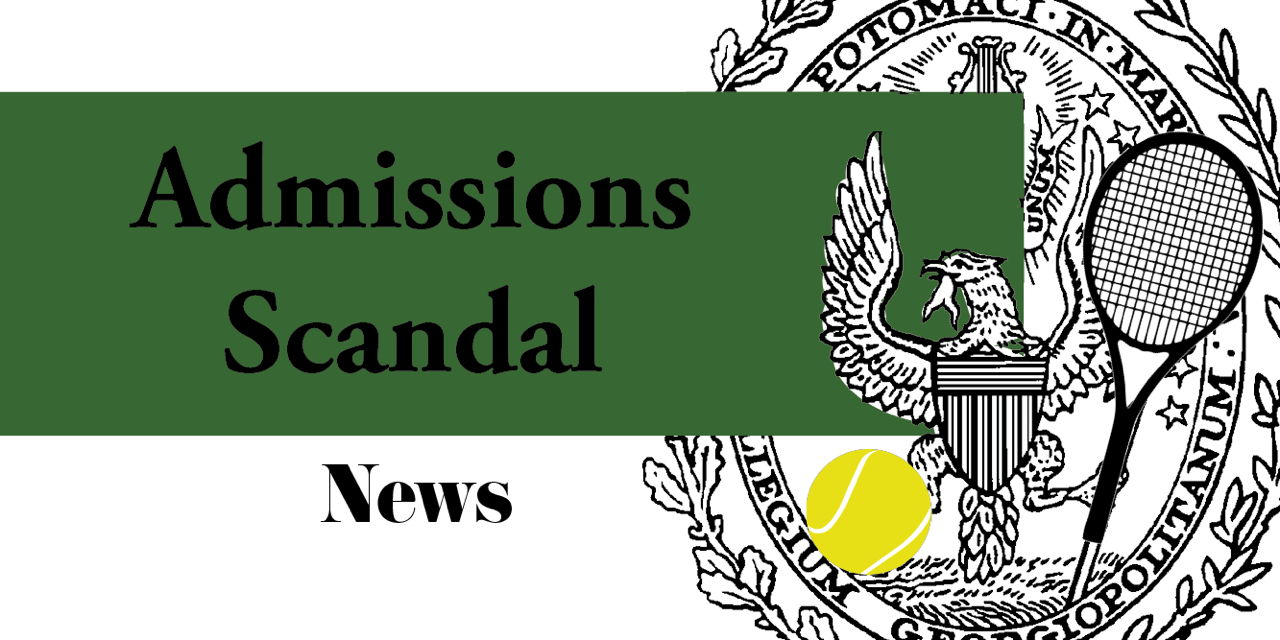 The U.S. District Court for the District of Massachusetts unsealed two indictments against members of the Georgetown community Tuesday morning. One named former Georgetown men’s and women’s tennis coach Gordon “Gordie” Ernst as a defendant, and the other included the parents of four students admitted to Georgetown, at least three of whom eventually matriculated.

Ernst has been charged with racketeering conspiracy. The indictment alleges that between 2012 and 2018, Ernst accepted more than $2.7 million in bribes. In return, Ernst allegedly “designated at least 12 applicants as recruits for the Georgetown tennis team, including some who did not play tennis competitively, thereby facilitating their admission to Georgetown.”

Ernst began coaching Georgetown’s tennis teams in 2006. In a statement to the Voice on Tuesday, a university spokesperson wrote, “Ernst has not coached our tennis team since December 2017, following an internal investigation that found he had violated University rules concerning admissions.” According to a subsequent statement from a university spokesperson to the Voice, the “Admissions Office discovered irregularities in the athletic credentials of students who were being recruited to play tennis. This triggered Mr. Ernst being put on leave in Dec. 2017, an internal investigation, and Mr. Ernst’s separation with the University in 2018.”

A later email from university vice presidents Lisa Brown and Erik Smulson sent to the student body on Tuesday stated that Ernst had been placed on leave following the internal investigation and “separated from the university in 2018.” The email also stated that while the probe determined that Ernst violated university policy, Georgetown only learned about his alleged criminal misconduct when later contacted by the U.S. Attorney’s Office.

A press release dated July 1, 2018 regarding his resignation was removed from the Georgetown Athletics website early Tuesday afternoon. The release listed the effective date of his resignation as June 30, 2018. The release expresses gratitude “for the many efforts Gordie has made over the years to create a first class tennis program at the University, both athletically and academically,” and gives no indication that his departure was due to misconduct of any sort.

The university’s Tuesday statement called Ernst’s alleged criminal acts “an unprecedented breach of trust” and assured that “Georgetown cooperated fully with the government’s investigation.” The second indictment also explained that in early March at least one parent implicated in the racket was aware that Georgetown was investigating the allegations. According to the document, “Georgetown was conducting an internal investigation to determine why students who were not tennis players had been admitted to Georgetown through Ernst.”

In November 2018, the university implemented a new policy regarding the admission of student-athletes. The policy specifies that head coaches may only recommend candidates for admission “who they believe will contribute to the team from an athletic standpoint” and forbids athletic department staff from modifying the application of prospective student-athletes in any way. It also implements a system of periodic audits by the Office of Admissions and the athletic department “to determine whether any of the recruited student-athletes were not on the roster of the sport they were recruited for at Georgetown.” If any student-athlete is found to not be on the roster of the team for which they were recruited, the coach must submit a written explanation of the discrepancy.

Following his resignation from Georgetown, Ernst accepted a position coaching women’s tennis at the University of Rhode Island (URI). URI placed Ernst on administrative leave Tuesday, following the unsealing of the indictment. In a statement to the Voice, a URI spokesperson wrote that since Ernst was hired in August 2018, “he has not been involved in the recruitment of any current players nor in the signing of any new recruits.” URI’s director of athletics was not aware of the charges against Ernst until NBC contacted the department for a statement Tuesday morning, according to NBC’s Washington affiliate.

When asked whether the university communicated the results of its internal investigation to the University of Rhode Island, a university spokesperson said “Georgetown was unaware of any criminal activity by Gordon Ernst that would have warranted notifying the Justice Department or other employers.”

William Singer, a cooperating witness who founded the Edge College & Career Network, LLC, and the Key Worldwide Foundation, a registered non-profit corporation in California, worked as a middleman in facilitating many of the payments. Singer, who was not explicitly named in the indictment of the parents but was named in the indictment of the coaches, used the foundation as a front to receive payments from parents involved in the conspiracy. Singer then compensated coaches and exam proctors for mislabeling students as potential recruits and falsifying entrance exams, respectively.

A defendant identified in the court report, Douglas Hodge, had allegedly collaborated with both USC and Georgetown athletics employees to get his children into the colleges. According to Singer, one of Hodge’s children “had only a 50 percent chance ‘at best’ of getting into Georgetown based on her academic record but that ‘there may be an Olympic Sports angle we can use.’”

Both Georgetown and USC sent acceptance letters to Hodge’s children, and his daughter matriculated to USC.

“The federal government has alleged that USC is a victim in a scheme perpetrated against the university by a long-time Athletics Department employee, one current coach and three former coaching staff,” wrote USC President Wanda Austin in an email to its student body. “We will continue to cooperate fully with all law enforcement and regulatory investigations.”

In addition, Elizabeth and Manuel Henriquez allegedly paid for their eldest daughter to take the SAT exam with a sympathetic proctor, then bribed Ernst to label her as a tennis recruit to Georgetown. The proctor, according to court documents, assisted the couple’s older daughter with the exam and “‘gloated’ with Elizabeth Henriquez and her daughter about the fact that they had cheated and gotten away with it.”

The couple paid the Key Worldwide Foundation, which distributed the money to both the proctor and Ernst. The Henriquezes’ receipt for their contribution to the foundation labeled the donation as allowing “the foundation to move forward with our plans to provide educational and self-enrichment programs to disadvantaged youth,” according to the indictment.

Singer alleges that they then directed $950,000 to Ernst, which he says was a lump-sum payment to facilitate the acceptance of the Henriquezes’ older daughter, and other potential students, to Georgetown as tennis recruits. The couple’s older daughter matriculated to Georgetown in the class of 2020 and, according to court documents, never participated in the school’s varsity tennis program.

Elisabeth Kimmel, the parent of another student who eventually matriculated to Georgetown, was also implicated in the scheme. According to court documents, the Kimmel family paid a total of $244,000 to secure their daughter’s acceptance to Georgetown as a tennis recruit. Again, the family used the Key Worldwide Foundation as a middleman to distribute the money to Ernst. The documents state that the Kimmels’ daughter was never a member of the varsity tennis team during her four years at Georgetown. The Kimmels are named again later in the report, having allegedly used similar channels to secure the acceptance of a younger son to USC.

Stephen Semprevivo, another defendant named in the indictment, also allegedly paid Ernst to facilitate his son’s acceptance to Georgetown as a tennis recruit. Following his son’s official acceptance to Georgetown, the Semprevivo Family Foundation paid the Key Worldwide Foundation $400,000, which was officially labeled as a “private contribution.” Singer alleges that he then disbursed that money to Ernst through the Key World Foundation, “representing payments for the purported recruitment of Semprevivo’s son.” Semprevivo’s son matriculated to Georgetown in the class of 2020, according to the court documents.

A spokesperson for Georgetown University did not elaborate on the specifics of potential consequences for Georgetown students implicated by the indictments.

This article has been updated. The headline has been edited from “Nationwide Admissions Scandal Implicates Georgetown, Former Tennis Coach Indicted” to reflect that the university itself has not been accused of admissions fraud. The date of the Georgetown University press release regarding Ernst’s resignation was originally cited as July 16, 2018. It has been corrected to July 1, 2018. The article will continue to be updated with more information as it becomes available. 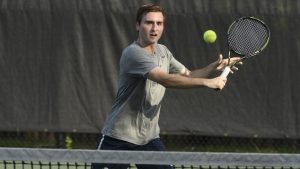 The article is a little wrong. It says that Georgetown was conducting an internal investigation. That’s just what the confidential witness told a parent in a recorded conversation, it’s not what was actually happening. It was the DOJ trying to get incriminating statements by the parents

Michael Sullivan – I believe you’re the one who’s mistaken, since Georgetown conducted their internal investigation way back in 2017 and got rid of Ernst before the cooperating witness was even busted, let alone cooperating.

Secrets to Self-Promotion in the Post-Kennedy Age | TrumpsMinutemen

Secrets to Self-Promotion in the Post-Kennedy Age – TCNN: The Constitutional News Network

Secrets to Self-Promotion in the Post-Kennedy Age – Freedom's Back

[…] no experience in those sports. One of the coaches named in these indictments was Gordon Ernst, who served between 2006 and 2018 as the head men’s and women’s tennis coach at Georgetown […]

FACT CHECK: Are the Obamas Tied to the Celebrity College-Admissions Scandal? – Snopes.com | e-News.US

[…] no experience in those sports. One of the coaches named in these indictments was Gordon Ernst, who served between 2006 and 2018 as the head men’s and women’s tennis coach at Georgetown […]

The Hodge daughter did actually matriculate to Georgetown, and graduated in 2013, per the FBI complaint. A different daughter went to USC (along with a son).

The bizarre story of the L.A. dad who exposed the college admissions scandal

[…] The Georgetown Voice reviews that college vice presidents despatched an e-mail to the scholar physique saying Ernst had been positioned on go away following an inner investigation, and ultimately left Georgetown in 2018. However a press launch from July 2018 about Ernst’s resignation didn’t point out any violation of college guidelines, and was faraway from the college’s web site early Tuesday afternoon, in accordance with the Georgetown Voice. […]