The Georgetown baseball team had its best week of the season so far, winning three of five games at Shirley Povich Field. The Hoyas first defeated Coppin State, 14-5, on Wednesday, before splitting a weekend four-game set with Princeton. Over four games played, graduate student Kyle Ruedisili went 6-for-11 at the dish and was named to the Big East Weekly Honor Roll. In the big win over Coppin State, Ruedisili led off the bottom of the first with a double down the right field line. He advanced to third on a wild pitch and eventually stole home for the Hoyas’ first run of the day. In the third inning, he grabbed an RBI with a single through the right side to put the Hoyas up six, and would get on base again in the fifth inning on a run-scoring wild pitch. In the third game of the Princeton series, Ruedisili reached base four times on a double, two singles, and a walk. He would also score twice and steal two bases in the 9-6 win. Ruedisili continued to be a problem for opposing pitchers out of the leadoff spot on Sunday, getting the scoring started with a solo shot over the right field fence in the third inning. He scored again after reaching on a hit by pitch and coming around on a single. After his dominant week, Ruedisili increased his batting average to .302. He also leads the Hoyas this season in runs, steals, slugging percentage, and OPS.

The Georgetown women’s tennis team struggled last week, losing 4-1 to Temple on Tuesday, then 4-3 to St. John’s on Friday, but senior Risa Nakagawa impressed with a pair of singles victories. In the No. 2 matchup against junior Kristina Titova on Tuesday, Nakagawa grabbed the Hoyas’ sole victory of the day, dominating the first set 6-1 and taking the second 6-3. Three days later, Nakagawa was matched up with Red Storm senior Olaya Solid at Yates Field House. Nakagawa continued her strong play in the No. 4 match, winning 6-4, 6-2. Nakagawa will look to keep it up as the Hoyas take a trip down to Richmond this Sunday to face the Spiders.

Senior attacker Daniel Bucaro earns his third ‘Hoyas of the Week’ appearance with another masterful display in the Georgetown men’s lacrosse team’s matchup against Drexel on Saturday. The No. 14 Hoyas continued their scintillating start to the season with their seventh win in eight games, defeating the Dragons at Cooper Field, 13-10. Bucaro notched five goals in the game, bringing his season total to 29, top in the Big East and third in the nation. Less than a minute into the matchup, Bucaro got the Hoyas on the board with an unassisted goal, but the Dragons would quickly recover. After Drexel went up 3-2, Bucaro came back with two consecutive unassisted goals to put Georgetown back on top. In the second quarter, he scored his fourth to put the Hoyas up four, this time on an assist from freshman forward James Reilly. In the third, he grabbed his fifth goal and fourth unassisted to put the Hoyas on top 10-8. He added an assist to his statline later in the quarter, finding senior attacker Robert Clark to increase the home lead to three.

Despite Georgetown’s 1-4 performance at the Buff & Blue Challenge last weekend, junior first baseman Noelle Holiday stood out and earned her second ‘Hoyas of the Week’ nod. Holiday went 4-for-12 at the plate over the Hoyas’ first four games of the Challenge and was named to the Big East Weekly Honor Roll for her efforts. Against Stony Brook on Friday, Holiday blasted a solo shot over the center field wall in the 6th inning to knot the score at three in a game that the Hoyas would eventually win 4-3. In a 19-10 loss to Oakland on Saturday, she had a dominant offensive performance. In the third inning, she doubled to center field and brought home two runs. In the fourth, she was back at it, sending a three-run homer over the left field wall to bring the Hoyas within five. Against Stony Brook again on Saturday, Holiday notched her fourth extra base hit of the weekend with a double to right field in the top of the second. 28 games into the season, Holiday now has five homers, 24 RBI, and a batting average of .342. 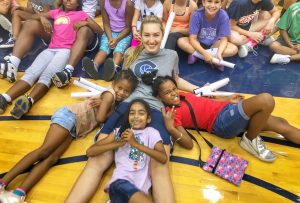 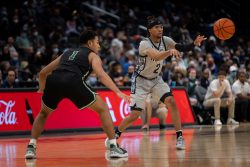