The Georgetown track & field squads competed at two events on Saturday: the Sam Howell Invitational in Princeton, NJ and the Sun Angel Classic in Tempe, AZ. The men had four wins on the day, including a standout performance from graduate student distance specialist Christian Liddell in New Jersey. Liddell won his second consecutive 3,000-meter steeplechase event, coming out on top with a time of 8:56.85. His time is best in the Big East this season and ranks 32nd nationally. Liddell was named Big East Men’s Track Athlete of the Week for his effort.

Despite a pair of team losses, freshman Elena De Santis had an excellent week on the courts. On Friday against George Washington, De Santis faced junior Melis Bayraktaroglu, and after winning a close first set 7-5, she dominated the second 6-0 for a singles win. In doubles, she teamed up with junior Anna Short for a 6-4 win over freshman Katarina Marinkovikj and senior Sara Grubac. Despite a loss in doubles on Sunday against Villanova, De Santis grabbed Georgetown’s only win of the day. She was knotted with senior Lindsey Evans after two sets before dominating 6-0 in the final set to secure the win. Next up for women’s tennis is an away matchup with Navy on Friday.

Senior attacker Daniel Bucaro earns his fourth spot on ‘Hoyas of the Week’ following another scintillating display against Providence on Saturday. Needing a bounce back win in conference play after falling to Denver last weekend, Bucaro came up huge with four goals and two assists. After a quiet first quarter saw the Friars take a three-goal advantage, Bucaro netted his first goal 4:45 into the second off an assist from junior midfielder Massimo Bucci to bring Georgetown back within one. He scored twice in the third quarter, including an unassisted effort that brought the game even. He would score once more and assist twice over the 7-2 late game run that put it out of reach. Bucaro was named Big East Attack Player of the Week and now has 3.45 goals per game, fifth-best in the nation.

After seven straight losses, the Georgetown men’s tennis team earned a pair of victories this past week as their season winds down. After not playing in a victory over William & Mary on Tuesday, sophomore Luke Ross was crucial in a come-from-behind win over archrival Villanova on Sunday. Ross and junior Ian Witmer got the Hoyas off to a strong start with a 6-3 win in doubles. The Wildcats then rattled off a 3-0 run and Georgetown was in need of a comeback. Ross again held firm in singles. After going down, he won a tight second set 7-5 and closed it out 6-3, to help the Hoyas grab the 4-3 win. 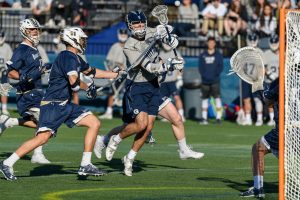 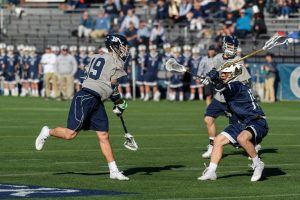