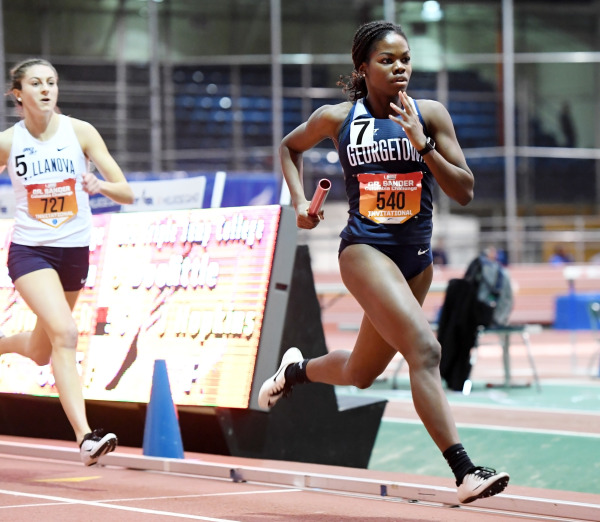 The Georgetown track and field team went to two meets this weekend, traveling to Boston for the BU Scarlet and White Invitational and Staten Island for the Villanova Invitational. Both the men and the women set several personal records (PRs), competing well in preparation for the upcoming Big East Championships.

In Boston, a small men’s squad of mid-distance runners competed in the mile and the 800 meter races. Sophomore miler Jack Salisbury led the way, shaving eight seconds off his previous best for a 4:05.13, while freshman Rey Rivera clocked a 1:49.57 in the 800 to just miss his PR by a hundredth of a second. Salisbury’s fourth-place finish in the mile accounted for all of the Hoyas’ points. Junior Nicholas Wareham, graduate student Scott Carpenter, junior Adam Barnard, and sophomore Kenneth Rowe also represented Georgetown in the mile while sophomore Eion Nohilly, freshman Ruach Padhal, and Rowe ran the 800.

The rest of the team went to Villanova, with the men garnering three medal finishes and the women two. Freshman Nate Alleyne ran a 22.04 in the 200 meters, finishing second overall out of a field of 33. Alleyne also led off the Hoyas’ 4×400 squad, which won the race in 3:17.65. Fellow first-years Lawrence Leake and Kino Cheltenham ran the middle two legs of the 4×4 and sophomore Quincey Wilson served as anchor. Cheltenham also PRed in the 400, finishing in 49.65. Finally, senior Bryan Bjerk chipped in with six points in the shot put, finishing third overall with a longest throw of 14.94 meters. On the women’s side, senior sprinter Jody-Ann Knight set new personal bests in both the 60 meter dash and the 200, running the former in 7.69 for fifth place and the latter in 24.27 for second place. Her twelve individual points led the way for the Hoyas. In the 400, freshman Shannon Meisberger bested her PR by over a second, finishing in 57.27 to win silver. Other notable performers included junior sprinter Taylor Williams and freshman hurdler Malika Houston, who finished fifth place in the 200 and the 60 meter hurdles, respectively.

The Hoyas will continue their winter campaign next weekend in Boston at the BU David Hemery Valentine Invite and in Iowa at the Iowa State Classic. The Big East Championships are in three weeks and will be held in Staten Island.