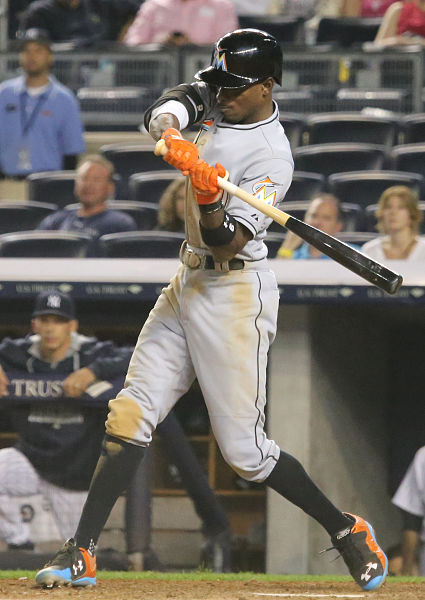 Welcome to Four Down Territory! This is a space where I’ll write about four things in professional sports every Saturday. Whether it’s the four greatest moments or the four worst blunders or anything in between, the only rule is that I’ll discuss four things. In my third installment, I’ll be outlining my favorite home runs by professional baseball players. Before you correct me on the rich history of the game and how my choices don’t reflect that at all, I have to note that this article comes with little to no objectivity and it’s merely the homers that give me the greatest personal pleasure. So don’t take it too seriously. Hope you enjoy!

There are a lot of lovable big boys in baseball, and some of them will get even more love further down the list. The most recent addition to this club is Willians Astudillo. He’s a big boy who plays every position except maybe shortstop and first base (though I wouldn’t be surprised if he starts doing that too) and also never strikes out. Seriously. The man has struck out 5 times in 121 plate appearances this season. Sure, he might be having a down year, but that doesn’t downplay just how freaking awesome he is. In fact, it may be offset entirely by his amazing hair. This homer didn’t take place in an MLB game, because that’s just too mainstream for the big fella. No, he couldn’t get enough baseball during the season, and so he played in the Venezuelan Winter League for Caribes de Anzoategui. All Astudillo did for the club was slash .325/.370/.500, rack up more hits (76) and total bases (117) than anyone else, and steal nearly as many bases (3) as he struck out (4, in 234 at-bats). And of course, in the bottom of the eighth with the score tied in a playoff game, he crushed a ridiculous homer that deserves a full breakdown. First off, any pitch over the middle of the plate is an offering for Astudillo. It’s begging to be hit, and he does just that, crushing it to deep left in an absolute no-doubter. The celebration is what we came for. For a full five seconds, Astudillo just admires his handiwork, watching it soar into the last row of seats before he finally decides to get up and round the bases. Except he doesn’t jog, he skips all the way around the basepath to home plate. I need this kind of energy in my life.

Yeah, I’m a supernerd. I like math. There, I said it. For a supernerd like me who loves data analytics, baseball is a statistician’s dream. Advanced stats paint a picture of who is truly valuable versus who gets lucky. Only dinosaurs would use ERA and batting average as metrics for player evaluation. Even on-base percentage is an old statistic, as the supernerds have suddenly realized that scoring runs is what wins games (!!), not just getting on base. These days, it’s all about wRC+, wOBA, BABIP, BB/K, and other stats with fancy acronyms and convoluted calculations. Jayson Werth is a victim of supernerds like me. He’s railed against us, saying that we’re “killing the game” and we’ve “never played baseball in [our] life”. Now, my U7 peewee team might disagree with that assessment, but that’s not important. The thing is, Jayson Werth has been out of the game. At his best, he was a powerful hitter and core player for a World Series team. But he’s fallen far from that. In his last major league season, the stats were unkind: twice as many strikeouts as walks, slightly above-average power (.167 ISO), not making good contact (.270 BABIP and 22.3% soft contact), and just generally below average (.311 wOBA and 87 wRC+). Even though he’s out of the majors, he joined a rec league, and he had one shining moment that went viral. We still have to keep in mind that Jayson Werth is a former major league player, and he’s going to be better than the average rec league player. Boy, it showed in this home run. The most memorable sound is the crack of the bat in this moonshot. Once the left fielder heard that sound, there was no point in moving. Jayson Werth did it again, ringing up a dinger that carried far out of the stadium. It might still be up in the sky. For one moment, the nerds lost. Then, we realized it was in a rec league, where his wOBA was probably somewhere around .380.

By the way, the supernerds are winning. The Orioles just hired Mike Elias as their GM. He’s credited with helping build the monster Astros team, and he’s one of us. Elias is a graduate of Yale, but more importantly, he’s a graduate of Thomas Jefferson High School for Science and Technology. That’s the same high school I went to. Across the country, it has a reputation for generating supernerds who won one (1) football game in my four years there. But Mike Elias made it to The Show, and more Mike Eliases will follow. The Jayson Werths are just going to have to accept it.

2. The Impossible Has Happened

Full disclosure: Bartolo Colon is featured in two of these four homers. He’s on the winning side of this one. When we talk about lovable big men, Astudillo may be the most recent but Bartolo is the first name I would think of. An ageless wonder who pitched in The Show at age 45, Bartolo was a beloved figure who was still a viable bottom-rotation option. But we’re not here to talk about pitching. No, we’re here to talk about a man who hit his first career home run at age 42, shocking the world in a moment baseball fans won’t soon forget. Remember that weird phase where the Padres bought every big name on the market and were still mediocre? Yeah, Bartolo added to their ignominy. He got a perfect pitch from James Shields that was again begging to be hit, and you knew Bartolo had the power. He drove it just right, blasting it over Justin Upton’s head and into the stands. His baserunning was comical to watch too, taking nearly a minute to touch ‘em all and be greeted by an empty dugout. The sheer joy on the faces of the players captures exactly how we all felt. Add it to Bartolo’s legend. The announcer very famously says “the impossible has happened!”. But it’s Bartolo Colon. Nothing is impossible when your nickname is Big Sexy.

Bartolo Colon is the pitcher for this one, which I think is the best homer I’ve ever seen. He understood the situation. The leadoff batter was Dee Gordon. Just a day earlier, Gordon had lost one of his best friends. Jose Fernandez was a promising young pitcher for the Marlins, but he had tragically passed away at the age of 24 in a boating accident. Fernandez’s story is one of perseverance. He attempted to defect from Cuba three times and failed, serving a prison sentence each time. On the fourth time, he succeeded, and quickly rose to the top of the board of high school pitchers in the state of Florida. Eventually, he made it to The Show, and became one of the best young pitchers in MLB. In his 2016 season, he was 16-8, with an ERA of 2.86, FIP of 2.30, and 253 strikeouts. But he wasn’t just elite. He played the game with such exuberance and flair, injecting life into the Marlins and their fans. Fernandez had it all, but in an instant, it was gone. It was a tragedy that rocked the baseball world. All the teams paid tribute, and Miami’s return to baseball would prove to be a watershed event emotionally. Fernandez was great friends with Marlins infielder Dee Gordon, who batted leadoff the day after his death. Sensing the importance of the moment, Bartolo knew what to do. He offered a slow fastball in the middle of the strike zone for Gordon, who belted it deep to right. Everyone knew Bartolo did that on purpose, and it was the right thing to do. As Gordon stepped over home plate and walked to the dugout, emotion overcame him and the whole stadium. Tears were streaming down his eyes and there wasn’t a dry eye in the ballpark. Athletes are often criticized for being in touch with their emotions, but Gordon showed his emotional intelligence, knowing it’s okay to let it flow after his tribute to his friend. The TV commentary was perfect: there was none. Just the sound of an entire stadium in support of a man who did his job under tremendous emotional duress. Sure, some homers win teams the World Series or set unbreakable records. But no homer will ever be greater than this. And in an article full of satire, that’s a fact.

The MLB Has a Competitive Balance Issue, and It’s Related to Money and Payroll Inequalities