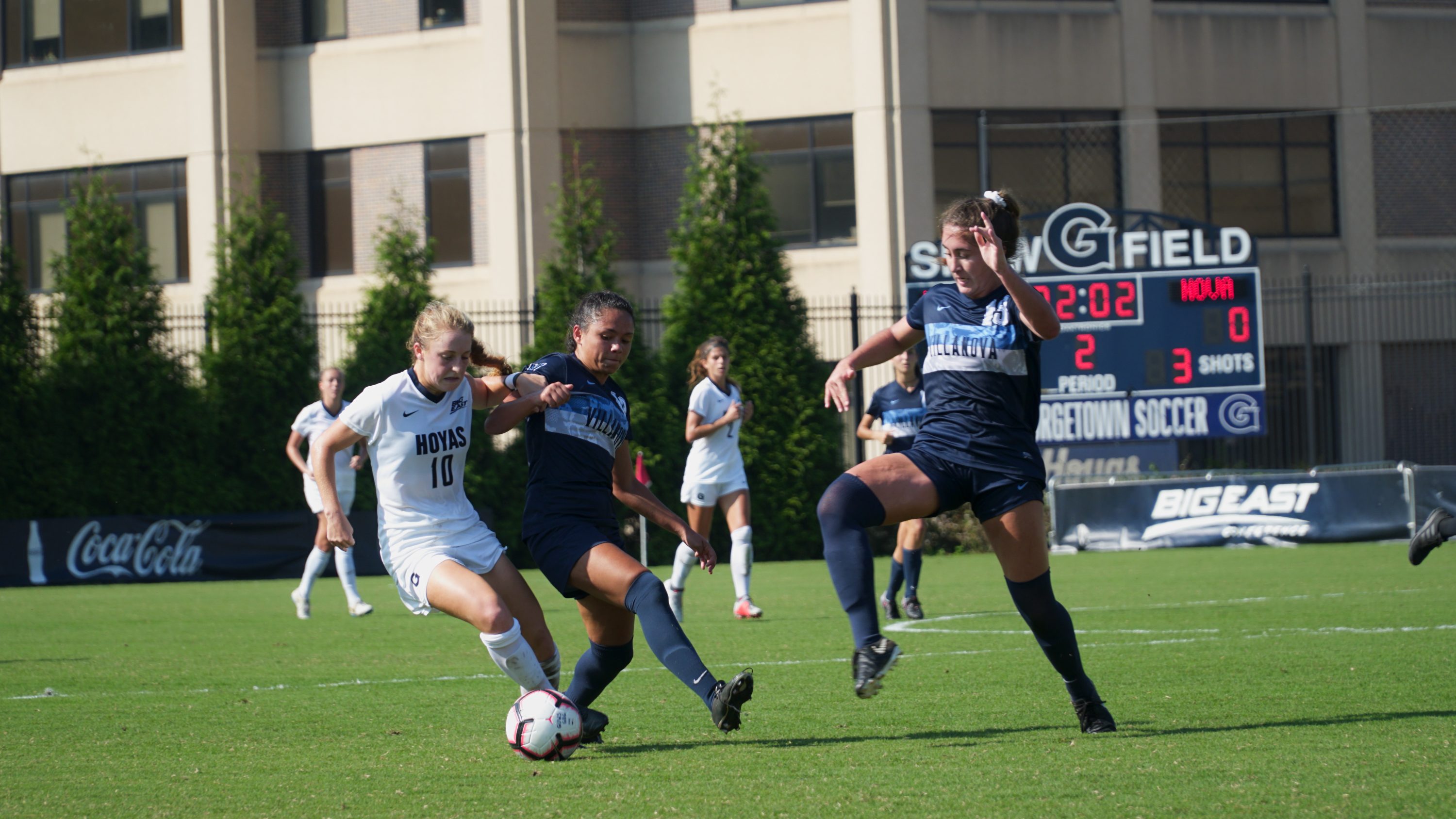 The Hoyas started the game strong and organized, playing in a 3-5-2 formation with sophomore defenders Jenna Royson and Boo Jackson playing high and wide. The first chance came in the 3rd minute when freshman midfielder Julia Leas fended off an NC State player, turned, and played the ball to senior forward Paula Germino-Watnick at the top of the box. Germino-Watnick tried to bend the ball into the right top corner, but her shot was blocked by a Wolfpack defender.

For the first 15 minutes, Georgetown comfortably controlled the game, while NC State primarily looked to play the ball over the top. The match began to really open up once NC State got its first chance of the game in the 15th minute. Senior midfielder Paige Griffiths received the ball at the 18-yard box, and ripped a shot aimed for the bottom corner, but Georgetown’s freshman goalkeeper Anna Leat parried the ball away and the visitors couldn’t do anything with the rebound. A minute later, Germino-Watnick picked up the ball with space on the left wing. A quick ball roll and stepover left the defender in the dust, and Germino-Watnick whipped in a blazing cross across the six-yard box, but no one was there for GU. This was probably Germino-Watnick’s best moment of a tough game in which she was double teamed and had multiple shots blocked.

“That’s part of being a marquee player is that you start to get extra attention. Well, guess what, if you get extra attention now it means that somewhere, somebody is open,” said Georgetown’s Head Coach Dave Nolan. “And I felt today she was a little bit hopeful with a couple of shots that I felt like she’s trying too hard. I think she should have been making better decisions rather than trying to get us back into the game by herself.”

As Nolan suggests, Germino-Watnick may need to adjust her game now that she is the center of every opponent’s attention. She will not have the same level of freedom she had last year, when other teams also had to concentrate on controlling Kyra Carusa and Caitlin Farrell.

In the 23rd minute, a poor Georgetown clearance fell to Griffiths, who then slotted a nice ball to forward Leyah-Hall Robinson, but Robinson was offsides. Although Georgetown continued to command the game, they repeatedly had difficulty clearing the ball to a teammate, which allowed NC State to regain possession and start their attack again. Georgetown also was not creating significant chances despite controlling the game. In response, Nolan switched to a four-back formation and substituted senior forward Casey Richards into the game. Richards’ substitution had an instant impact, giving Georgetown more numbers up top to connect with and build their attack. However, it left the Hoyas vulnerable at the back. In the 29th minute, for example, Robinson played a ball for her teammate Jameese Joseph, who had acres of space. Joseph took one touch and blasted a shot right at Leat who made her second solid save of the game.

Then, in the 33rd minute, the substitution paid off. Richards intercepted a poorly executed NC State freekick, touched the ball to Carolan, and the counterattack was on. The Wolfpack defender did well to knock the ball out of play. The subsequent corner found senior midfielder Carson Nizialek, whose first touch got away from her but deflected off a few NC State defenders and fell right to an open Carolan on the six-yard box. Carolan then calmly tapped the ball in the net for her second goal in as many games, making it 1-0, Georgetown.

Less than a minute later, a Hoya defender carelessly fouled midfielder Ricci Walkling in the box which gave NC State a penalty kick. Starova stepped up and clinically put the ball in the bottom right corner where Leat had no chance.

“It was a game that kind of turned on moments. We got a little bit lucky on our goal to go up one nothing. But it’s unforgivable to allow a team to score a goal within the next minute. We say all the time, the most dangerous moments in a game are the first five minutes after a break and the first five minutes after a goal. And we fell asleep, we got ourselves in trouble,” Nolan said. “And then, instead of us going into halftime one nothing, in a game that we were kind of managing quite well, now all of a sudden it’s 1-1.”

The second half was similar to the first. Both teams had various opportunities to score. A deflected shot in the 51st minute fell to NC State’s Tzarria King, who put it between Leat’s legs and gave NC State the 2-1 lead.

A minute later, Georgetown earned a free kick in an excellent position at the top of the box, but Nizialek skied it. In the 56th minute, freshman forward Gia Vicari cut in from the right wing and played a beautiful switch that led to a shot from Nizialek that just missed the top corner. Only down 2-1, Georgetown continued to move the ball up the field and play with confidence, but each time they looked dangerous, an errant pass would cause a turnover.

In the 71st minute, a NC State cross got through everyone and found King again who slotted it away for her second goal of the game. Last year, the Hoyas went 3-0 in regular-season matchups in which they trailed. But at 3-1, Georgetown appeared defeated. If anything, NC State looked like the more likely of the two teams to score the fifth goal of the game. The game ended at 3-1, handing Georgetown its first loss at Shaw Field since August 18, 2017

The Hoyas will look to bounce back against No. 8 Duke at 7:00 p.m. ET on Wednesday, August 28. Over the weekend, Duke fell 2-0 to No. 2 North Carolina, so they will also be hungry to rebound. Live stats and a stream are available at guhoyas.com. Follow @GUVoiceSports on Twitter for updates and game recaps throughout the women’s soccer season, as well as coverage of the rest of the school sports throughout the year. 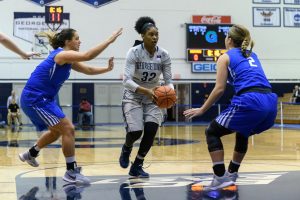 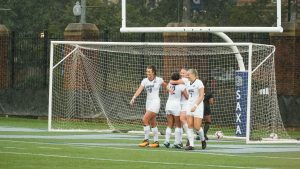 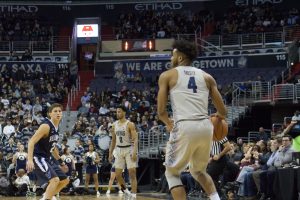