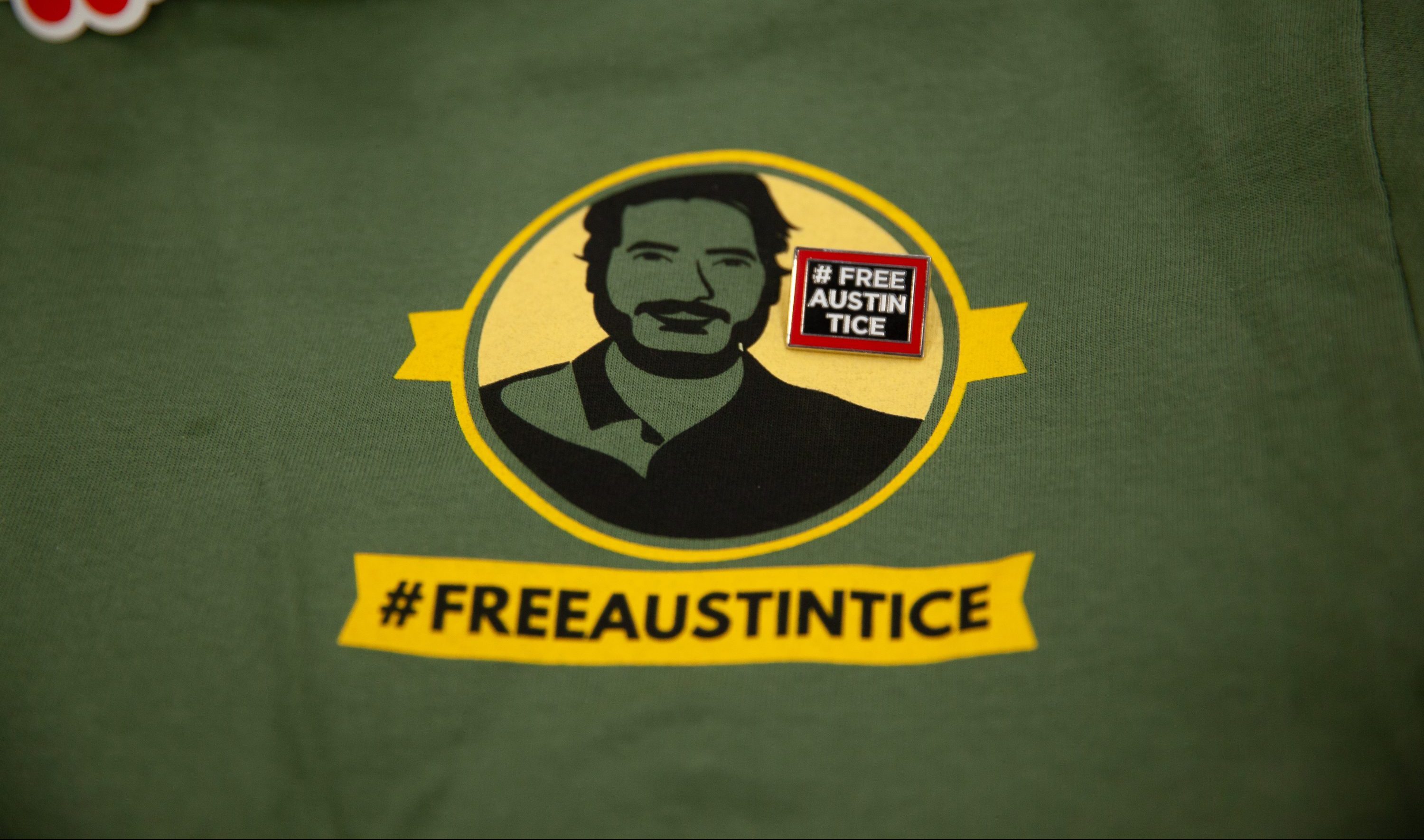 Debra Tice thanked God for bringing the room full of volunteers together, and asked Him to bring everyone strength, wisdom, and discernment as they moved about the Capitol. Her husband, Marc, stood beside her with a hand placed on her shoulder as she expressed her gratitude for the effort in Congress to bring their son, Austin Tice (SFS ’02), home. 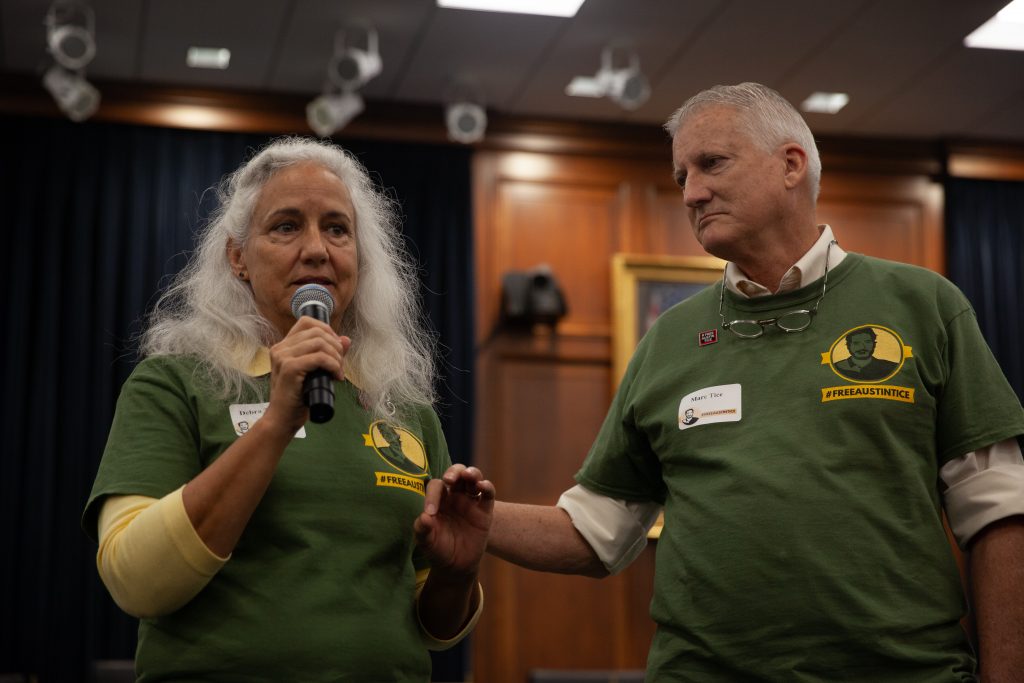 The group, assembled in the Rayburn House Office Building, wore #FreeAustinTice pins and olive green shirts describing Tice: a Hoya, a Marine, and an award-winning journalist. They had come the morning of Sept. 23 to urge members of Congress to sign a letter to the president, invite them to visit an exhibit of Tice’s photojournalism in the foyer, and offer them a pin to wear to spread awareness of his case.

This August, Tice entered his eighth year of captivity, likely in Syria.

In the summer of 2012, before his final year at Georgetown Law, Tice travelled to Syria as a freelance journalist. His stories and photos, which were nationally circulated, gave Americans a look at the violence of the Syrian civil war, then in its initial stages.

His parents said as a Marine deployed to Iraq and Afghanistan he saw firsthand the effects of war on civilians. “He wanted to let people know that this is the direction this is taking and we just don’t want to go there,” Debra said.

While attempting to travel back to Lebanon from Darayya, a suburb of Damascus, Tice was detained at a checkpoint. It was Aug. 14, 2012, just three days after his 31st birthday.

Five weeks later, a 46-second video, titled “Austin Tice is Alive,” was posted on YouTube. It showed Tice blindfolded, being guided up a mountainside by armed men. Tice appeared to be prompted to recite the words “In the name of Allah” in Arabic, adding “Oh Jesus, oh Jesus,” as the video ends.

The Tice family has received no information from their son’s captors since the video surfaced. In April 2016, Syria’s Deputy Foreign Minister Faisal Mekdad said Tice was not being held in Syria and the government did not have any information about him. 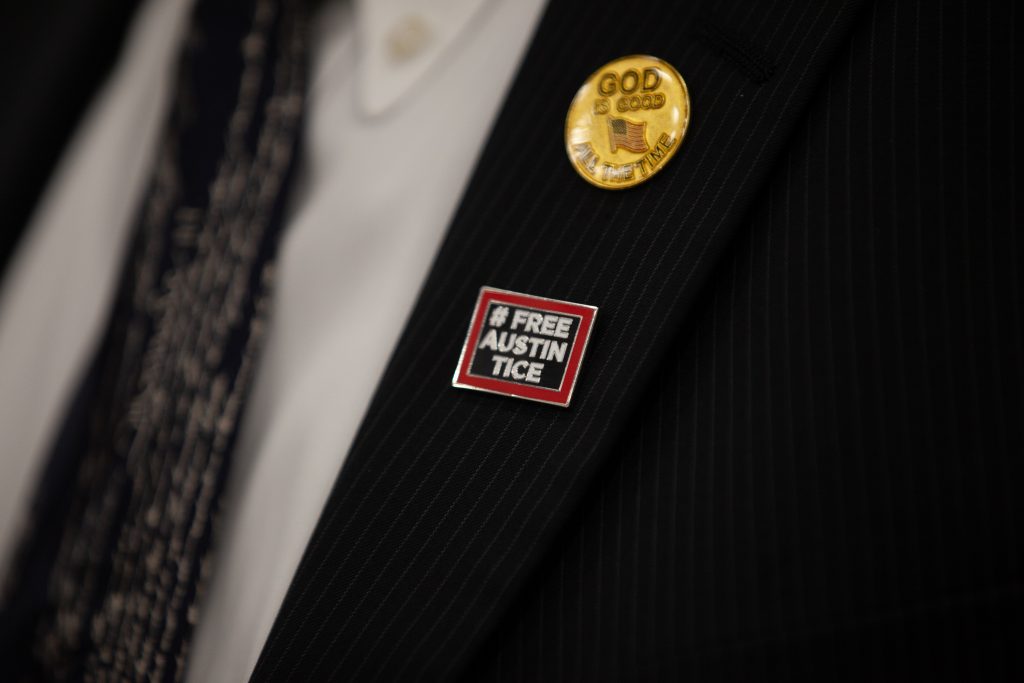 The U.S. government has stated multiple times that it is confident Tice is alive. The State Department has been working on his case through the Czech embassy in Damascus, as the United States has not had diplomatic relations with Syria since 2012. In November 2018, U.S. envoy to Syria James Jeffrey said the government believed Tice is being held in Syria, though Jeffrey didn’t say how they knew this or who may be holding him.

Tice is currently the only American journalist being held abroad. In April 2018, the FBI announced a $1 million reward for information leading directly to Tice’s safe location, recovery, and return.

The federal government is not the only entity working on Tice’s release. Various media organizations, including Reporters Without Borders, McClatchy, The Washington Post, and the National Press Club have aided Debra and Marc since 2012.

Julie Moos, director of the National Press Club Journalism Institute, spearheaded the Sept. 23 event and has been aware of Tice’s story since the beginning. Upon joining McClatchy’s D.C. Bureau in March 2013, she found herself in a newsroom with close ties to Tice.

“There was a calendar on the wall of Mark Seibel, Austin’s editor,” Moos said. “It marked every day that Austin was gone, and so when I say his presence was felt, it was really felt there.”

For Debra and Marc, their son is never far from their minds. He is the eldest of the Tices’s seven children, and his family said that his big personality is sorely missed at family events. “When you allow yourself to take a moment and think about all t 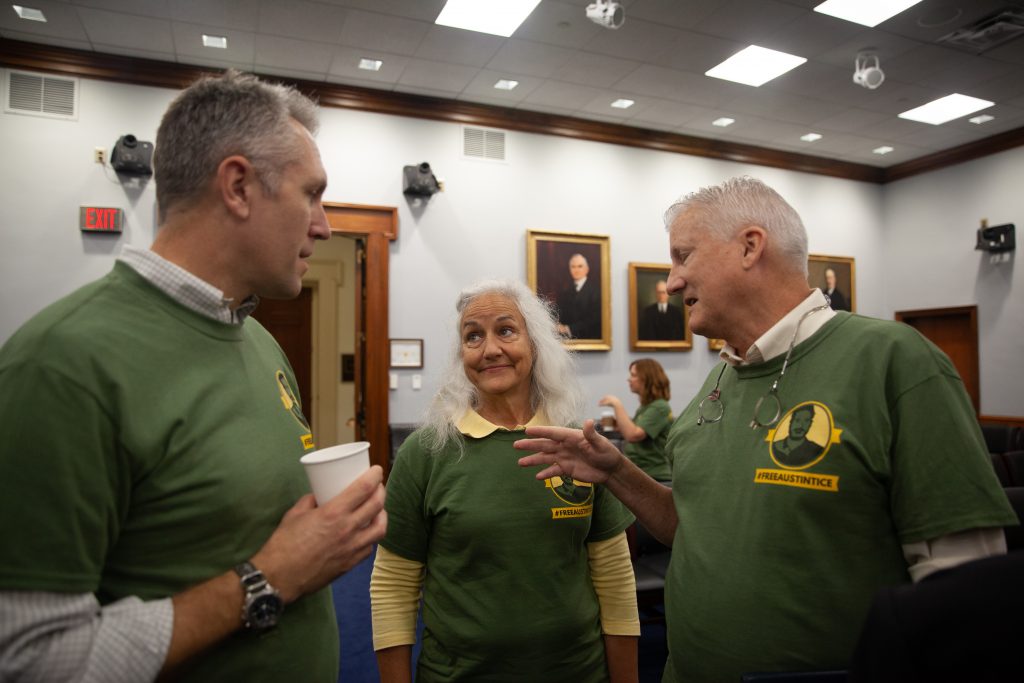 Marc and Debra Tice speak with an Ask About Austin volunteer.

he family events in seven years, that’s quite a load for a mother’s heart,” Debra said.

These past seven years, when people have asked “What can we do to help?” their response is often the same refrain. “Ask your federal representative about Austin. Ask them if they know about Austin’s situation and ask them if they can support,” Marc said.

They mentioned a similar sentiment to Moos when they met with her in late May to plan a campaign that would keep Austin’s name in the news. “That just sort of resonated and that’s where the idea for Ask About Austin came from,” Moos said.

Tice’s parents had seen a group raising awareness for Alzheimer’s on a previous visit to D.C. and were inspired to bring their own cause to the Hill. “You could tell that there was some sort of collective effort going on to kind of make some noise about something that was really important,” Moos said.

The Ask About Austin campaign officially launched on Tice’s 38th birthday, just a few days before he entered his eighth year of captivity. His parents penned an open letter as part of The Washington Post’s Press Freedom Partnership arguing that each day Tice is detained, his story is news.

their son, they are frustrated by how easily his story drops out of the news. Marc cites today’s chaotic media climate as a potential reason for the absence of a daily reminder of Tice’s situation. “It’s not even a 24-hour news cycle that we’re in. It’s like a 10-second news cycle,” he said.

Tice’s story eventually made its way from national headlines to Georgetown’s curriculum. Ari Goldstein (COL ’18) learned Tice’s story in 2016 in his fall semester Introduction to Journalism course when his professor, Barbara Feinman Todd, assigned the class a Texas Monthly article to read detailing Tice’s work as a foreign correspondent in Syria and later capture.

“I just remember being stunned because it felt like a story of so much importance to the Georgetown community and particularly to anyone in the Georgetown world who’s invested in journalism,” Goldstein said. “I was shocked that I didn’t know about it before and then really energized that I was learning about it and that there was so much opportunity to get involved.” 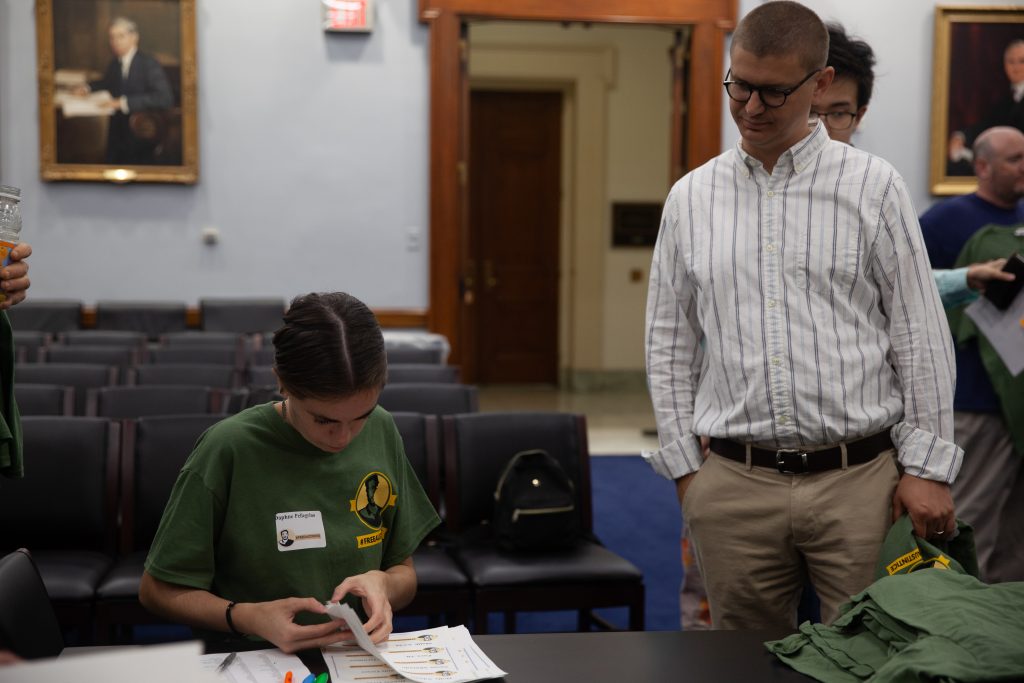 Ask About Austin volunteers set up for the event.

Students, the Office of Federal Relations, and the Journalism Department have worked together for Tice’s release over the years. In April of 2016, Goldstein, Emily Kaye (COL ’18), Samantha Rhodes (COL ’17), Naaz Modan (COL ’18), and other Georgetown students organized a rally in front of the White House in support of Austin. That summer, the Office for Federal Relations mobilized Georgetown alumni serving in Congress to sign letters urging President Obama to use all means necessary to secure Tice’s release.

The following November, Feinman Todd, along with ten students, attended the Newseum ceremony dedicating a banner which will be displayed until Tice returns home. That month, the students also drafted a letter calling on the incoming Trump administration to fight for Tice’s return. It was signed by 1,000 students and delivered immediately after President Trump was inaugurated. Georgetown’s Office of Federal Relations helped make sure the letter was seen by the Fusion Cell, a government entity created under the Obama administration to coordinate the recovery of American hostages held abroad.

In the spring of 2017, the students pioneered a letter-writing campaign to their representatives asking them to make bringing Tice home a goal. The Office of Federal Relations helped ensure the letters were delivered to the correct offices.

At the end of his senior year, Goldstein curated an exhibit of Tice’s photojournalism, which was displayed in the ICC Galleria, and later moved to the Georgetown Law Center and then the National Press Club. Now, the exhibit will reside in the foyer of the Rayburn Building until Oct. 1 under the sponsorship of Reporters Without Borders.

Scott Fleming, Georgetown’s former associate vice president for federal relations, got to know Debra and Marc on personal level before retiring last year. “They are two of the most resilient human beings I think I will ever meet in my life. They’ve had grandchildren. They’ve had weddings in their family,” Fleming said. “They have found a way to live their life, and there’s not a moment that goes by that Austin is not in their thoughts and they’re trying to figure out, ‘What can we do to get him home?’” 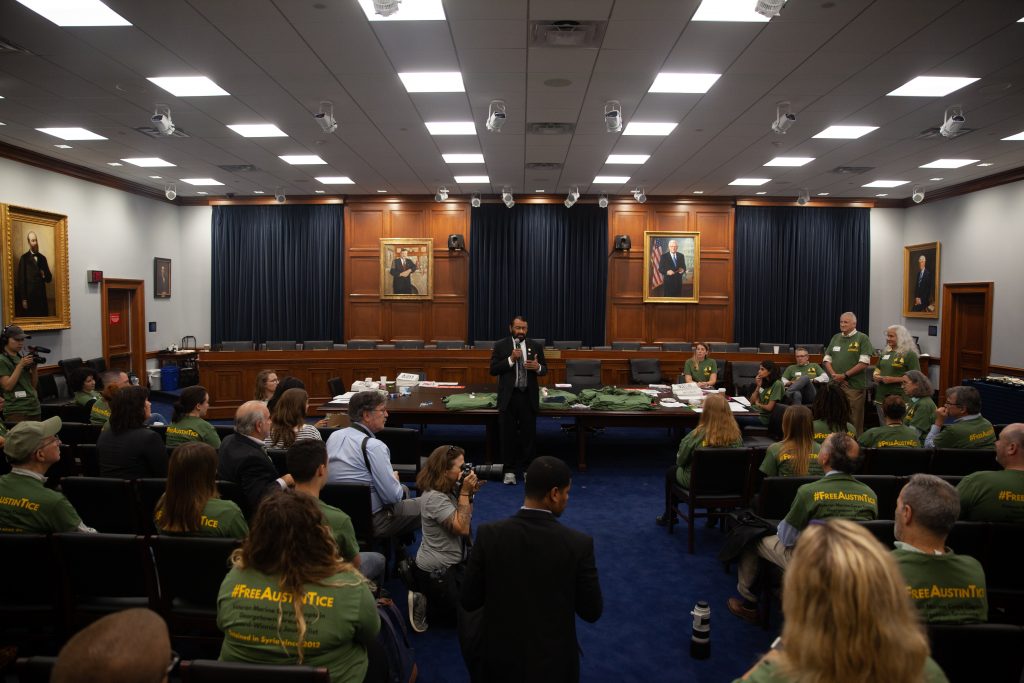 Al Green meets with volunteers ahead of the Ask About Austin event.

Fleming, in his retirement, spent the weeks leading up to Monday’s event drawing upon his connections from 21 years working on the Hill and 18 years at Georgetown, in hopes of garnering as many signatures as possible on the letters to the president circulating in Congress. He also helped set up opportunities for the Tices to sit down with members on Tuesday and Wednesday and tell their son’s story themselves.

Katy Button, associate vice president for federal relations, said Georgetown remains committed to supporting Tice’s cause. “We have been coordinating closely with Scott Fleming, whose dedication to Austin’s cause has been extraordinary,” Button said. “The University remains committed to doing everything in its power to support the Tice family and bring Austin home.”

Goldstein worried that when he graduated, Tice’s story would be forgotten. He and Kaye visited journalism classes during the spring of their senior year, urging students to continue their efforts, especially as Fleming and Feinman Todd, two of Tice’s most dedicated advocates on campus, also retired in the spring of 2018.

“If we as members of the Georgetown community forget about Tice, then the world certainly isn’t going to remember him either, so we need to lead the charge in keeping up a national conversation about Austin,” Goldstein said. “Obviously, his family is leading the charge, but we need to be right there behind them in keeping Austin’s name on people’s minds.”

Peter Remsen (SFS ’20, SSP ’21), has been following Tice’s story since August 2012 when he saw the headline, “War Journalist Stops Tweeting.” He came to the Capitol to volunteer.

“If I were in Austin Tice’s position I would want someone to do the same for me, you know do unto others as you would have others done unto you,” Ramsen said. Government officials could play an important role in urging the government to act, if only they’re aware of Tice’s situation, he said. “That’s what our elected representatives are for, to listen to us and take issues to bat.”

The Tices agreed public awareness isn’t just about people knowing their son’s story, but also being moved to act. “It’s in hopes that people will take action, that they will communicate th 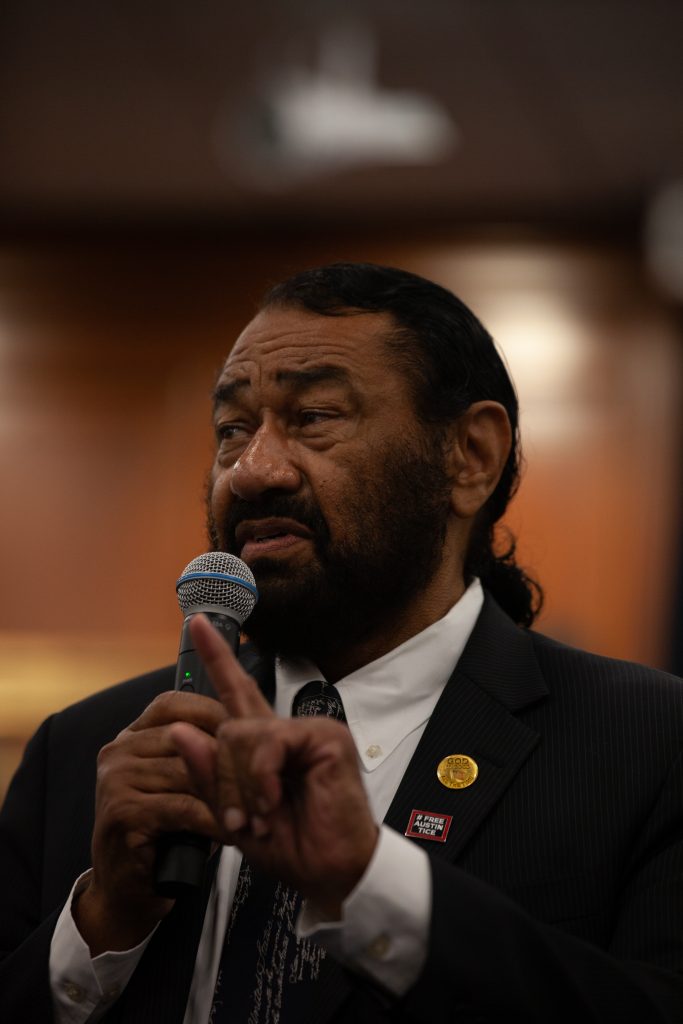 eir concern and interest about Austin’s captivity and his freedom to the people that can move the needle so to speak,” Marc said.

Al Green, Democratic Representative for the 9th district of Texas and the Tices’s Representative, said every Congressperson has a stake in Tice’s release. “It’s bringing an American home.”

The letters received 122 signatures in the House and 52 in the Senate. The letter urges Trump to use the full weight of his national security team to bring Tice home. Debra and Marc said they have hope in the Trump administration’s ability to secure their son’s release.

“This president has publicly stated over and over again that this is a priority that he has,” Debra said. “He has committed to bringing Americans home and he makes that a priority in a way that the previous administration did not.”

At the end of Monday’s event each of the volunteers went home to their friends and family, but the Tices are still without their son. The Tice family website counts up the moments since he was captured. At press time, Tice has been missing for 2601 days, one hour, 13 minutes, and six seconds. 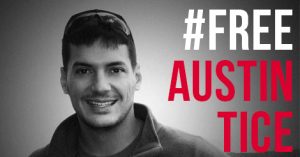 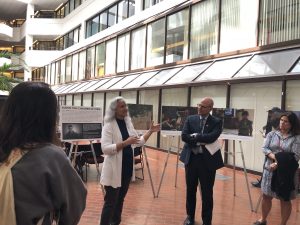