Last Friday, the Hoyas were shutout by the Monarchs before being trampled by the Tribe two days later. The GU offense only managed to score twice across both games. Freshman forward Ellie Maransky continued her good run of form with her fourth goal of the season off of freshman midfielder Abby English’s first collegiate assist. Junior forward Cami Osborne scored the second goal of the weekend from senior back Ali Cronin’s penalty corner, which was laid off by junior midfielder Jax van der Veen. In her second career start, freshman goalkeeper Megan Maynes recorded 18 saves but was beaten seven times against W&M.

Temple is coming off of a Big East loss to defending champions No. 3 UConn (10-2, 3-0 Big East). The Owls held the ball well during the first quarter but were unable to keep the Huskies off the board. UConn scored two goals in the first three minutes of the second quarter before adding another before halftime. TU ended the half with zero shots. In the 36th minute, the Huskies added the fifth and final goal of the game. Sophomore midfielder Claire Thomas led the Owls with two shots. Temple used two goalkeepers during the game, playing junior goalie Cristina Carotentuto for 45 minutes and senior goalie Maddie Lillilock for the last 15 minutes; the two combined for seven saves.

After the game against the Owls, the Hoyas will head over to Towson on Sunday.  The Tigers narrowly lost 3-2 to Davidson (2-10, 0-4 Atlantic-10) on Sunday. The Wildcats struck first in the 9th minute on their first shot of the game. Four minutes later, they picked up the game’s first green card. Sophomore forward Samantha Aljets leveled the game off a penalty corner in the 22nd minute. Two minutes before halftime, Davidson took the lead back with an open shot. In did not take long for the Wildcats to extend their lead after halftime, finding the cage in the 34th minute. Sophomore midfielder Kathryn Parkinson pulled a goal back off a tipped pass from a penalty corner in the 58th minute, however, the comeback was short-lived as Davidson held on for the last two minutes.

Before Towson takes on the Hoyas, they will host Northeastern (6-5, 0-1 CAA) in their first conference game of the season. Georgetown is 5-8-1 all-time against the Tigers and 3-0 in their last three games.

The games are set to begin at 1:00 p.m. and 2:00 p.m., ET on Friday and Sunday, respectively. Live stats and streams are available on guhoyas.com. Follow @GUVoiceSports on Twitter for coverage and continuing coverage of fall sports at Georgetown. 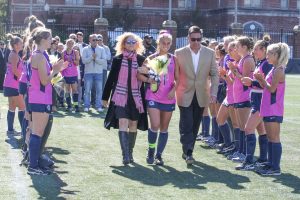 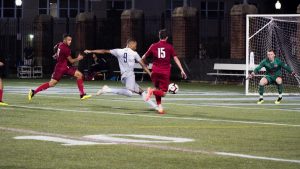