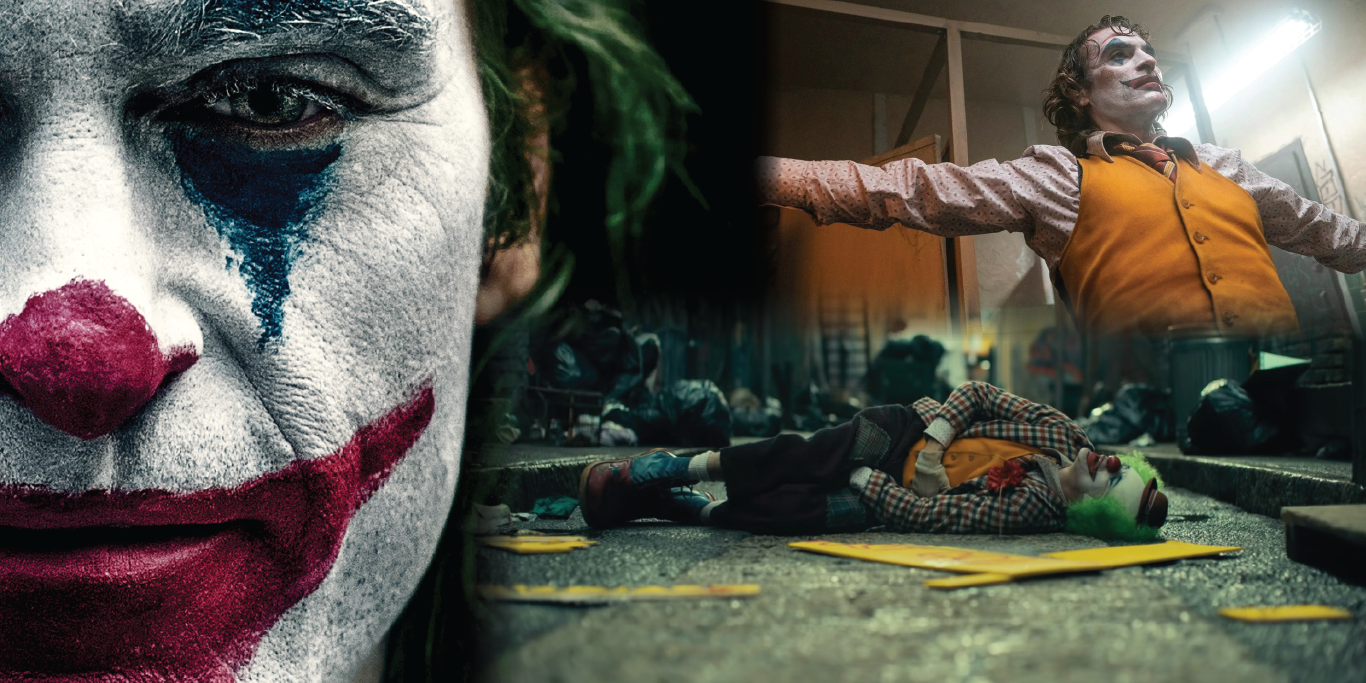 Arthur Fleck (Joaquin Phoenix) has a bad life. His rent-a-clown job doesn’t pay enough for him to afford a nice apartment, his therapist can’t get funding to prescribe him enough medication for his mental illness, and he’s stuck in a society that doesn’t care about him or seem to notice he exists. He’s just one more disaffected loner living in a Gotham City where politicians and the media prefer to mock those who are suffering instead of listening to their problems. Fleck is perpetually abused at the hands of his employer, his fellow citizens, and the system as a whole. Then one day he fights back, killing three Wall Street scumbags who tried to assault him. Instead of recoiling at the violence, the people of Gotham embrace it, turning Fleck’s clown costume into a symbol of rebellion against their elite oppressors. The person most affected by the killings, however, is Fleck himself. After fleeing the scene, he stops to look at himself in the mirror. Then he smiles and starts to dance. In that moment, the man named Arthur Fleck is gone and replaced by the monster known as Joker.

At its core, Joker (2019) is a portrait of a broken man in a broken city and the horrifying ways they feed into each other. Though it is technically a comic book movie, Joker eschews most genre conventions, elevating itself above usual blockbuster fare to become a more serious drama. The film emphasizes character development and political commentary rather than action and spectacle. This allows writer and director Todd Phillips to delve deeper into Fleck’s psyche and its impact on the world around him. Yet this more introspective storytelling style allows the film to explore themes that are intensely disturbing. The philosophy that Joker posits is dark, nihilistic, and violent.

Yet, by any technical measure, Joker is a masterpiece. The cinematography is gorgeous, finding beautiful compositions in the grimy, scummy world of Gotham City. Composer Hildur Guðnadóttir’s score mixes aggressive, dissonant strings and percussion with ironically cheery pop music to disturbing effect. These elements draw us into Fleck’s world, helping us understand what sort of mindset and environment would create a monster like Joker. The script is also particularly effective, depicting the character’s decline as a slow accumulation of grievances leading toward a descent into madness instead of a sudden snap that turns him evil.

Much of the film’s success lies in Joaquin Phoenix’s powerhouse performance. Phoenix fully embodies a man on the brink, using his hollow-eyed stare and contorting, sunken-chested physique to convey a character edging towards madness. As the film progresses, he subtly shifts Fleck’s posture and mannerisms, adding in confident swagger bit by bit until Joker is totally different from his former identity. The tool Phoenix uses best, however, is laughter. Fleck has a condition that causes him to laugh uncontrollably, which Phoenix displays to unsettling effect. His laugh is a hacking, sobbing cackle that bursts from him at the most inappropriate and disturbing times. It’s the laugh of a character barely suppressing his anguish, a character who laughs because if he didn’t, he’d have no choice but to cry. It’s an amazing touch that separates Phoenix’s performance and makes Arthur Fleck the only sympathetic version of Joker in cinema.

All the effort that Joker takes to create a relatable main character is what makes this film so disturbing. We are asked to see the protagonist as an inspiration for the citizens of Gotham, emboldening them to rise up against the system that oppresses them. We are asked to see Joker, a mass murderer and one of the most infamous psychopaths in film history, as a folk hero. When he kills, the powerful and the cruel condemn him, but the masses exalt him and use him as a symbol. Their praise only fuels his own warped psychology, giving him confidence and purpose that he never had before. By the end of the film, Fleck dances on the hood of a wrecked police car, surrounded by a crowd of cheering rioters in clown masks. For the first time in his life, other people notice him, and he feels seen.

That’s what makes this film so uniquely dangerous. Compelling depictions of violence and violent characters are incredibly common in cinema, but illustrations of characters being lauded for violence and feeling better because of it are much rarer. Within Joker, there is a logic to the violence, a cause and effect pattern that makes Fleck’s killings beneficial both to himself and society as a whole. The fault for his condition is laid at the feet of a system that ignored and abused him, but the solution isn’t systemic. It’s personal and destructive. Because we are so connected to Fleck’s viewpoint throughout the film, we understand why he kills and, in the warped logic this movie puts forward, we see how it makes sense.

“What do you get when you cross a mentally-ill loner with a society that abandons him and treats him like trash? … You get what you fucking deserve!” This “joke,” delivered in the lead up to a murder and then repeated over and over in the finale, may as well be a thesis statement for the film. It’s a dark, brutal movie that claims violence is a rational solution to problems both personal and societal. It may be artistic and well-made, but that’s just decoration to cover an abhorrent ideology in a veneer of prestige.  By the end of the film, it’s not just Fleck who’s wearing a clown mask, it’s all the protestors. One clown has turned into many. Anyone can wear the clown mask. Anyone can be Joker.