Beware, The Good Liar is Trying to Con You 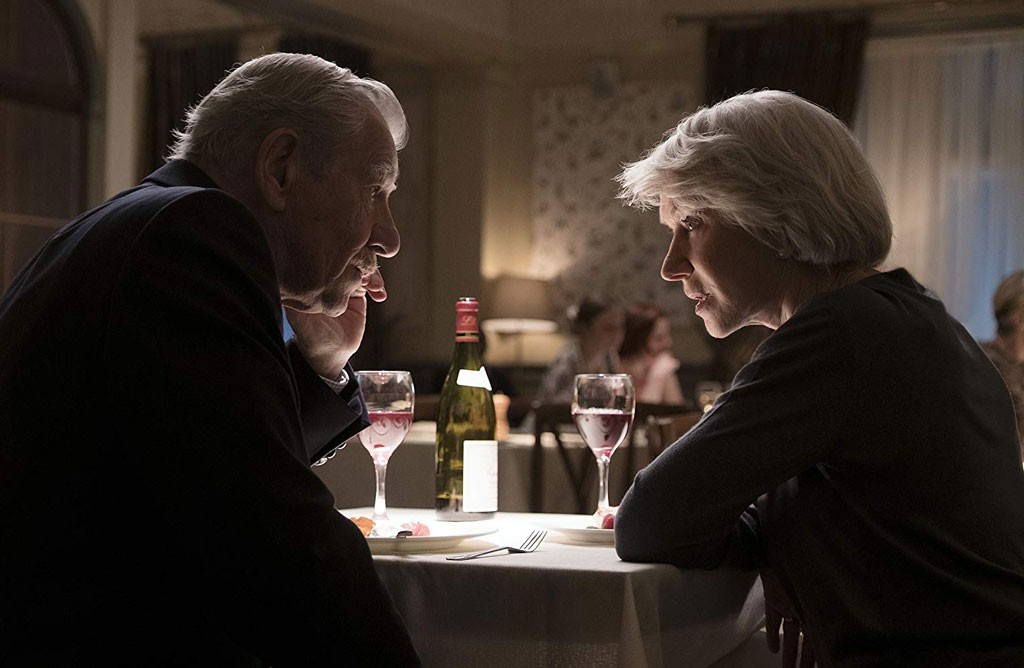 I once read the following anecdote, which describes the process of a con job. At a casino, a con man invites a potential victim to play cards and sits across from him at a gaming table. While playing, the con man subtly reveals that he is making sure the ace frequently ends up in his hand. The victim, believing that this apparent flaw will allow him to turn the tables on the con man, asks the casino for more money so he can better capitalize on his “genius.” Once the victim has received the money, the con man’s accomplice walks up behind him, bludgeons him over the head, and takes all the cash. I believe this story accurately conveys the experience of watching The Good Liar (2019).

The Good Liar opens by introducing us to Brian (Ian McKellan) and Estelle (Helen Mirren), two sweet, old, Britons going out on a first date after meeting each other online. It turns out, however, that neither of them has been entirely truthful. Estelle is actually Betty McLeish, a wealthy widow who used to teach at Oxford University. Brian is actually Roy Courtnay, a career con man who wants to steal all of her money. As Roy gets closer to Betty, however, he realizes she might not be as gullible as she seems and, to make things even more complicated, he might be falling in love with her.

This setup seems perfect for a delightful and charming caper film, and for the first ninety minutes of the movie, that’s exactly what it is. McKellan and Mirren are both excellent performers, and watching them play off of each other is a real joy. The various twists and reveals keep the plot clipping along and are a lot of fun to watch. There are jokes. There’s excitement. The con frequently seems like it will fail only to be saved by some clever turn of phrase. Sure, the entire premise involves stealing an elderly woman’s life savings, but from minute one it’s pretty obvious that Betty is trying to con Roy just as much as he’s trying to con her. Plus, they both seem to be genuinely falling for each other, so you can sit back and enjoy, safe in the expectation of a happy ending. But that’s how The Good Liar pulls off its con. It lets you relax, thinking that you’ve figured out its final twist, before sucker punching you with a reveal that’s much darker and more extreme than anything shown prior would suggest.

Now, if you really want to watch this movie, I would suggest you stop reading this article. The final twist is so shocking, so at odds with the rest of the film and so impactful to what the film has to say that in order to properly review the movie, I am going to spoil the entire thing. You’ve been warned.

When The Good Liar reaches its climax, Betty and Roy come face to face, both aware that the other is trying to take their money. It’s a wonderful scene, fueled by brilliant back and forth dialogue, and it is a lot of fun. But then Betty reveals her motivations. It turns out that she doesn’t want Roy’s money just to get rich, or even to punish him for being a criminal. She wants to hurt Roy because back when they were both teenagers in WWII-era Germany, Roy raped her, sexually assaulted her sister, and then got her entire family killed by the Nazis, all of which is shown in a horribly uncomfortable flashback. Then the two of them get into a brutal fight that leaves Roy in the hospital with so much brain damage that he can barely move or communicate. It’s extreme. It’s shocking. It completely changes the film from a fun caper to a dark thriller. It is also the one element that I think will determine whether audiences enjoy or despise this movie.

For my part, I am still unsure how I feel about this ending. On one hand, it’s rather impressive.  Many “twist” endings tend to be either painfully obvious or unsupported by the rest of the movie. This twist is neither. In hindsight, Roy is a pretty horrible guy, stealing people’s money for a living and resorting to torture and murder if his schemes start to go awry. The film’s flashy presentation, soothing score, and tendency to cap heavier scenes with quippy jokes doesn’t, or at least shouldn’t, excuse the inherent awfulness of his actions. In fact, I believe that this may be part of the point that The Good Liar is trying to make. We as a film-watching audience have been conditioned to believe that if a criminal is likable enough, the crimes that they commit are ok. Movies from Dirty Rotten Scoundrels (1988) to the Ocean’s franchise to Baby Driver (2017) have depicted charming rascals committing terrible crimes without passing any judgment because either the victim was vaguely scummy or the protagonist got a cute comeuppance in the film’s final scenes. Crime may not pay, these films suggest, but criminals sure can be cool guys. In The Good Liar, director Bill Condon and screenwriter Jeffrey Hatcher subvert this entire trope, showing that Roy has been using his surface-level charm to escape punishment for his incredibly heinous acts. The severity of the twist is necessary because it not only has to refute the previous 90 minutes of its own runtime, but also the decades of other films that came before it.

On the other hand, however, I can’t deny that the final twist negatively affected my experience watching the film. I felt conned, suckered in with a breezy chance to watch two legendary actors display the full scope of their talents and then bludgeoned with content that was much darker than I was emotionally prepared for. The final twist feels too extreme to be believable in the context of the rest of this film. Seeing the protagonist rape a young girl and then turn her parents over to the Nazis was so incongruous with everything prior that it almost seems like an entirely different movie. It left a bad taste in my mouth and means I have no interest in ever returning to watch the film again. General audiences will have to decide for themselves. If you appreciate The Good Liar’s criticism of the caper genre or can enjoy the lightness of the first two acts in spite of the heaviness of the third, then this movie is for you. If, however, you don’t want to deal with the whiplash of emotional bludgeoning, steer clear—this film is a con.

Re The Good Liar. How many people would have ALL of their assets in cash? This film has two of them.