Home » By The Numbers » Men’s Basketball Rights the Ship With Convincing Win Over St. John’s

Sophomore guard Mac McClung scored 21 of his 24 points in the first half while five Hoyas scored in double figures as the Georgetown men’s basketball team (11-5, 1-2 Big East) cruised past St. John’s (11-5, 0-3 Big East) 87-66 at Capital One Arena on Wednesday evening. After suffering back-to-back thorough defeats at the hands of Providence and Seton Hall to begin Big East play, the Blue & Gray stormed out of the gates against the Johnnies, assisting on 14 of their 16 first-half field goals as an insurmountable lead formed. Junior forward Jamorko Pickett and graduate student guard Terrell Allen combined for 34 points as part of an offensive assault that saw GU attempt 33 free throws.

“It was a great win,” Head Coach Patrick Ewing said postgame, before clarifying – “any win in the Big East is a great win.”

The Hoyas’ early baskets were exactly what the doctor ordered. Senior center Ömer Yurtseven, who was held to just 3-of-14 shooting against Seton Hall, opened the scoring with a thunderous slam after an entry feed from Allen. McClung, showing no hindrance from the eye injury that sidelined him against Providence, rattled off Georgetown’s next seven, highlighted by an acrobatic up-and-under layup. Meanwhile, the Red Storm looked disjointed on offense and racked up five turnovers before the under-16 media timeout.

“Our defense sparked our offense,” McClung said. “A lot of guys stepped up.”

Senior guard Jagan Mosely’s corner three was followed by a baby hook from freshman center Qudus Wahab that capped a 12-1 run. The Hoyas wouldn’t look back from there, seemingly first to every loose ball and the beneficiaries of every bounce. Allen got a running hook to fall before snagging one of his three first-half steals and drawing a foul, while McClung again elevated on his way to the rim for another bucket to make it 27-11. After being outscored 95-47 in the first halves of those two aforementioned conference losses, Ewing was happy to be back at home, watching his team fire on all cylinders.

“We had six great [non-conference] wins, and then we went on the road and had two horrible losses,” Ewing said. “That was one of the things we talked about – we can’t dig ourselves a hole – and tonight we didn’t.”

The game became a contest that wasn’t as the clock neared the under-four timeout, as GU’s role players seemed to be playing with as much confidence as they have all season. Pickett, Mosely, and Allen all feasted on the open looks the Red Storm’s porous defense granted, while junior guard Jahvon Blair fired a difficult no-look bounce pass to McClung in transition for two more. Despite taking two timeouts, Head Coach Mike Anderson’s squad was lost offensively, with only two players going for more than a pair of points in the half.

At the break, Georgetown’s 53-26 advantage reflected one of their best halves of basketball in quite some time. Despite the visitors’ ineptitude, take nothing away from Ewing’s team, which earned a cushion that will seldom be seen in this year’s hypercompetitive Big East. McClung was the star, going for 21 points, but Pickett also had six rebounds, Mosely knocked down 3-of-4 from beyond the arc while doling out six assists, and Allen had seven points to go with his swipes.

McClung was ecstatic for his teammates. “That’s my bro [Pickett] right there. And then you have guys like Jagan and Terrell, fourth and fifth-year guys, you can’t say enough good things about them.”

The Hoyas were punched in the mouth almost immediately coming out of the intermission, as back-to-back baskets from redshirt junior guard Rasheem Dunn put an exclamation mark on an 11-0 run that trimmed the deficit to 16. GU was again pegged back after extending the lead by a pair of triples from the Red Storm’s lone first-half bright spot, junior forward LJ Figueroa. Just as McClung had gone quiet, however, a pair of strong takes inside from Pickett kept St. John’s at bay.

After shooting it at an abysmal 25.8 percent rate in a first half where they connected on just 2 of 14 3-point tries, the Johnnies rallied to 40 second-half points. Nevertheless, a still-leaky defense conceded all the looks Georgetown needed to see the win through. A scoop layup from McClung was the standout of a stretch run that featured a barrage of Hoyas free throws as GU closed the door with a 21-point margin of victory.

Georgetown returns to play against Villanova (11-3, 2-1 Big East) at noon on Saturday in Philadelphia. The game will be televised on Fox Sports 1 with live stats available at guhoyas.com. Follow @GUVoiceSports on Twitter for coverage and coverage of all winter sports on the Hilltop. 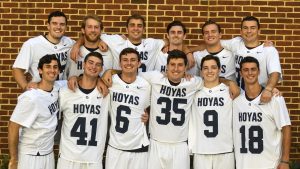 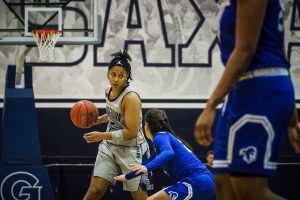