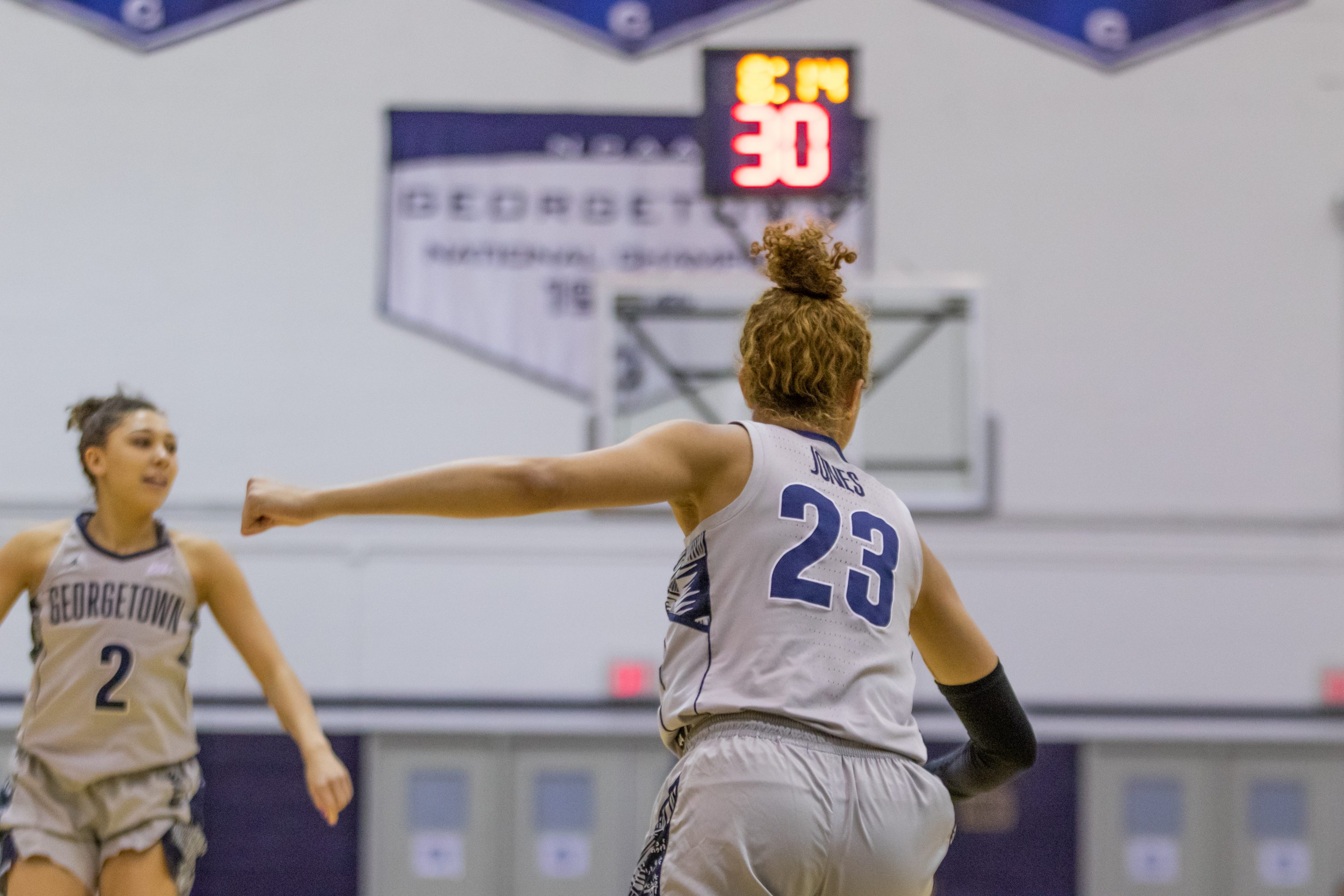 On Saturday evening, the Georgetown Hoyas women’s basketball team (4-14, 1-6 Big East) suffered a 53-74 blowout loss to the Villanova Wildcats (11-7, 5-2 Big East). The Hoyas started slowly in the first and third quarters, allowing Villanova to pull away by the end of the game. Senior forwards Bridget Herlihy and Mary Gedaka of the Wildcats led all scorers with 17 points apiece. Graduate student guard Taylor Barnes led the Hoyas with 14 points and sophomore guard Nikola Kovacikova contributed 13 points of her own.

The Hoyas opened the scoring with a 3-pointer from Barnes, though the Wildcats responded with four points of their own. Senior guard Marvellous Osagie-Erese answered with a jump shot, but Villanova went on an 8-0 run capped by a 3-pointer from junior guard Raven James. Shots were difficult to come by for the Hoyas, who could not hit a field goal in 3:18. On the other hand, James finished with seven points in the quarter, and Villanova had a nine-point advantage going into the second.

The Hoyas came out quickly in the second quarter, cutting the deficit to two behind two free throws and a three from Kovacikova, and a jump shot from sophomore guard Tayanna Jones. Villanova responded with a layup from freshman forward Madison Siegrist, and the teams traded buckets until Villanova went on a 12-0 run to take a 40-26 lead, their largest of the game up to that point. Herlihy scored seven points during the run, and the Wildcats went into halftime with a 41-30 lead.

In the third quarter, Georgetown dried up from the field, as they weren’t able to score until the 4:36 mark. Meanwhile, Villanova added to their lead, going on an 11-0 run highlighted by five points from Siegrist and four points from junior guard Cameron Onken. Georgetown was able to finally answer with a free throw from Barnes and five points from sophomore forward Shanniah Wright. However, Villanova continued to hit shots, and they ended the quarter with a 59-37 lead. Herlihy and Gedaka prevented any hopes of a Georgetown comeback, combining for nine points in the fourth quarter.

Overall, the Hoyas struggled shooting the ball, going 18-for-57 from the field. Though Barnes led the team with 14 points, she shot just 4-for-15 over the course of the game. On the other hand, Gedaka was difficult to stop down low, shooting 7-for-12. Four players for the Wildcats finished with double figures, including Siegrist’s double-double of 15 points and 12 rebounds. Georgetown also got outrebounded, 41-32, and they were outscored in the paint, 30-16.

The Hoyas continue their road trip on Friday at 12:30 p.m. for a matchup with Marquette (12-5, 5-1 Big East). The game will be streamed on the Big East Digital Network. For continued coverage of women’s basketball and all Georgetown sports, follow @GUVoiceSports on Twitter.