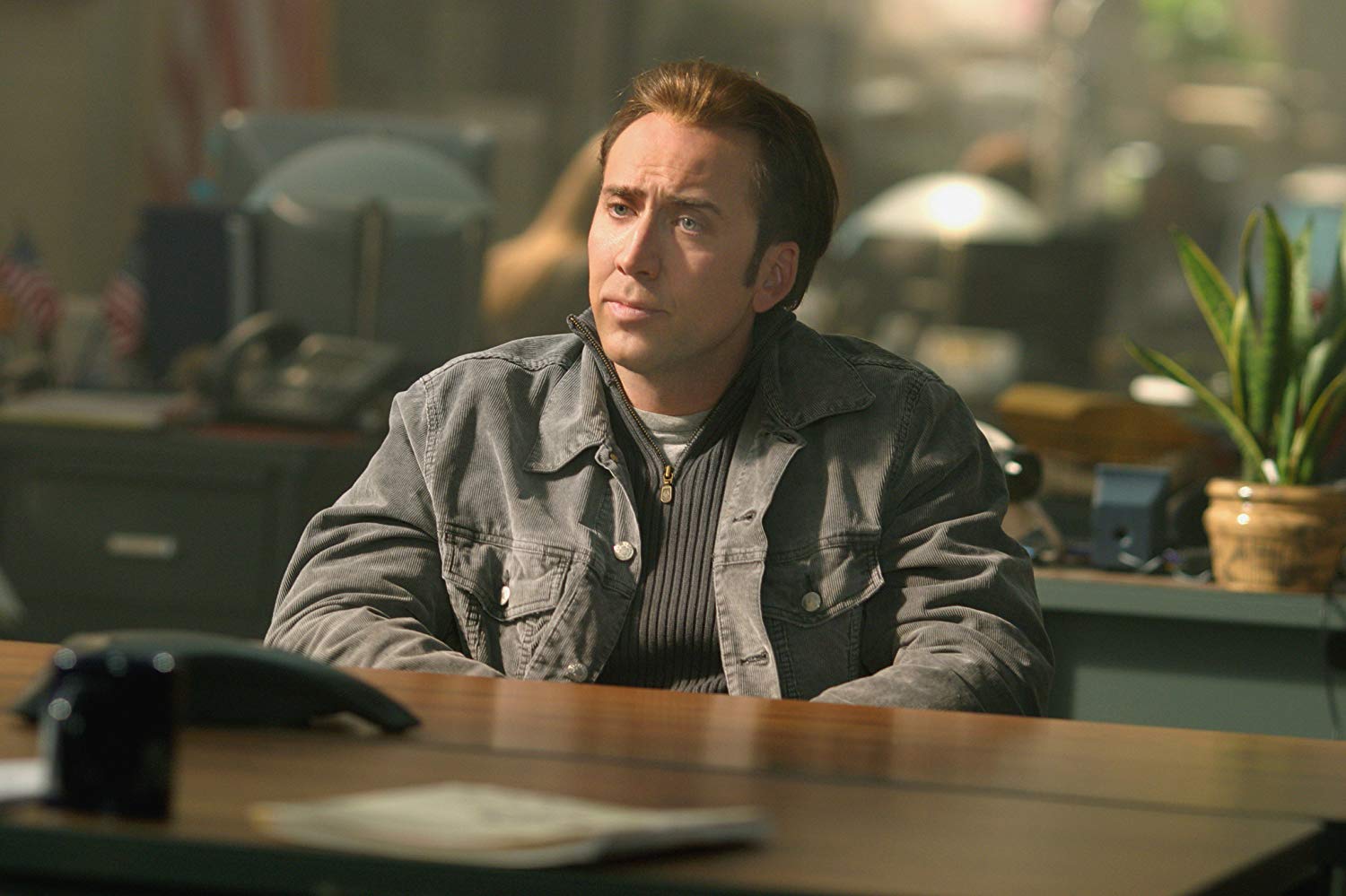 Thirteen years after the premiere of National Treasure 2: The Book of Secrets (2007), another entry in the Nicholas Cage-starring pseudo-archaeological action franchise is apparently in development.  While Cage is not yet officially attached to the project (franchise producer Jerry Bruckheimer and writer Chris Bremner are the only confirmed contributors), it is reasonable to assume that he will be reprising his leading role as Benjamin Gates, because there is literally no reason to make a third National Treasure movie without the greatest over-actor of all time. It is also reasonable to assume that at some point during the movie he will solemnly declare that he is going to steal some cultural artifact because again, what is the point of the movie without that scene? In anticipation of this inevitable cinematic moment, below is a list of things that Nicholas Cage should steal in National Treasure 3.

Ok, before getting into the more gonzo ideas further down this list, it’s important to take one entry to consider the possibility that National Treasure 3 is actually a good movie. Not a trashy-but-fun movie or a so-bad-it’s-good movie, but an actually thoughtful, well-made, compelling film. The National Treasure franchise’s exploration of alleged U.S. secrets has been lovably cartoony in the past, but it could also be used to examine underappreciated or poorly understood moments in American history. What if, for example, the clue to whatever treasure Cage’s Benjamin Gates is after was written on the back of Treaty K, an accord between the United States and Native American tribes in California that was ignored to allow greater access to gold mines? Or the Equal Rights Amendment, an unratified constitutional amendment that would prohibit discrimination based on sex? The film could then dig into the racial and sexual politics surrounding these documents and explore how the United States hasn’t upheld its ideals when it comes to marginalized communities. Is this version of the movie ever going to happen? Absolutely not, and to be honest the guy who produced The Lone Ranger (2013) probably isn’t the best person to do it, but it’s an interesting idea and it represents the hope that this kinda stupid franchise could turn into something truly, honestly great.

A third National Treasure movie will have to up the stakes from the first two movies and what better way to do that than stealing a whole monument? Picture this: there’s a secret treasure hidden somewhere, but the Founding Fathers wanted to make sure nobody could get to it, so they made the key the entire Washington Monument. Benjamin Gates hires a team of helicopters to fly into Washington D.C., fire grappling hooks into the ground, and lift America’s favorite pencil-shaped statue straight into the air before plunging it into a keyhole dug deep into the ground. It wouldn’t make any historical, physical, or logical sense, but it would be exactly the sort of ridiculous stunt that people will remember.

The moment from the National Treasure franchise that everyone remembers is in 2004’s National Treasure when Gates decides he’s going to steal the Declaration of Independence, but there’s an equally ridiculous scene in the 2007 sequel where he decides to kidnap the President of the United States. Today, however, the idea of the President disappearing is more likely to elicit cheers than distress, so National Treasure 3 will need to find someone more universally beloved to be imperiled in the pursuit of hidden riches. That person should definitely be Beyoncé. First of all, she is a genuine National Treasure who would elevate the franchise just through her presence. Second of all, her inclusion would obviously require musical numbers, which the rest of the cast would have to join in on. Can you imagine Nicholas Cage belting out the lyrics to “Drunk in Love”? Or trying to follow the Homecoming (2019) choreography? It would be absolutely glorious.

4. The Articles of Impeachment

Citing efforts by cultishly devoted members of Congress to cover up crimes by the President of the United States, Benjamin Gates steals the Articles of Impeachment to preserve the principles of the Constitution. A taut game of cat and mouse unfolds as Gates delves into a bizarre international conspiracy by the President to blackmail foreign leaders into discrediting his political rivals. Hot on his tale are every sort of cartoon villain imaginable: corrupt businessmen, mobsters, and Nazis. In a controversial move, the Academy nominates National Treasure 3 for Best Documentary Feature.

Arguably the weirdest of America’s supposed secrets is the possibility that the government is keeping aliens hidden from us in Area 51. Nicholas Cage could follow a series of clues to find out about the aliens and then free them from imprisonment. The screenwriter wouldn’t have to do very much work, as the internet recently figured out the perfect plan for Area 51 infiltration. Disney could even get in a little cross-property promotion by including Baby Yoda as one of the aliens. The meme potential is over 9000.

Speaking of things that the internet thinks are being hidden from them despite probably not existing, the unfinished edit of Zack Snyder’s version of Justice League (2018)! This version of the film starts out with Cage learning there’s a secret treasure hidden in Warner Bros. movie vault. Within the first ten minutes, he’s broken in and found a film reel marked SNYDER CUT: NEVER RELEASE. The rest of National Treasure 3 is just the Snyder Cut with a Nicholas Cage commentary track. It’s an incoherent, poorly conceived, painfully awful mess barely made better by Cage constantly complaining about how great he would have been as Superman. It does nothing to change Justice League’s status as a boring trash fire. Defying all logic, DC fanboys still make it the highest-grossing movie of all time.

Did you realize that Nicholas Cage’s character in National Treasure graduated from Georgetown? Expanding on this clearly very important detail of his backstory, Benjamin Gates could return to his alma mater and complete the heist he never finished in college. Georgetown actually offers the perfect location for a National Treasure movie, with plenty of history, spooky tunnels, and dangerously dilapidated buildings to explore. Just think, after Gates steals the clock hands, he could have a thrilling chase sequence where Jack the Bulldog and John DeGioia pursue him across the rooftops of Vil A. He could be “accidentally” poisoned by the fine cuisine at O’Donovan’s on the Waterfront. He could show off his historical knowledge by actually remembering any of the readings from Father Carnes’ class. It would only make sense to people who went to Georgetown, but they would absolutely love it.

8. The Ark of the Covenant

The National Treasure franchise has always been a modern day Indiana Jones knock off, so why not make the connection explicit? A priceless artifact has been stolen, so the government approaches archaeologist adventurer Benjamin Gates to retrieve it. Research leads Gates to the artifact’s original discoverer…Dr. Indiana Jones (played, of course, by Harrison Ford). The two of them team up, but it turns out that the Ark of the Covenant is now being guarded by an immortal mummy, so they enlist the talents of Brendan Fraser’s Rick O’Connell. The Archaeologist Cinematic Universe is born. Then Tom Cruise and Russel Crowe show up and the whole thing immediately falls apart.

That’s right everybody, Nicholas “not the bees” Cage has an Oscar. For acting. He was even nominated for a second one. In this version of the movie, the rest of the cast shows up and tells Benjamin Gates that a clue to the next big treasure is hidden somewhere in his house. After a brief search, Gates finds the little golden man and reads the inscription. He stares at it, a look of confusion and sadness spreading across his face. The camera cuts to a wide shot, showing the film’s cast and crew standing concerned in the background. Director Francis Ford Coppola steps forward and says “Nick, it’s been a rough couple of years and we’ve all started to worry about you.” The rest of the movie is an intervention for Nicholas Cage’s acting career. There are hugs. There are tears. In the end, we all move forward with hope towards an uncertain future.

It turns out the Church of Scientology has been hiding a massive trove of historical artifacts under L. Ron Hubbard’s tomb. The only way to get in is a facial I.D. scan keyed to famous actors within the movement. Unfortunately, John Travolta has been locked in jail for the crime against film that is Gotti (2018). Breaking him out will be impossible. Nicholas Cage thinks about the problem for a bit, then looks straight into the camera and says, very solemnly, “I’m going to take his face…off.” The theater immediately erupts into cheers and applause. Babies are spontaneously born. World peace is achieved. The sun explodes. The end.