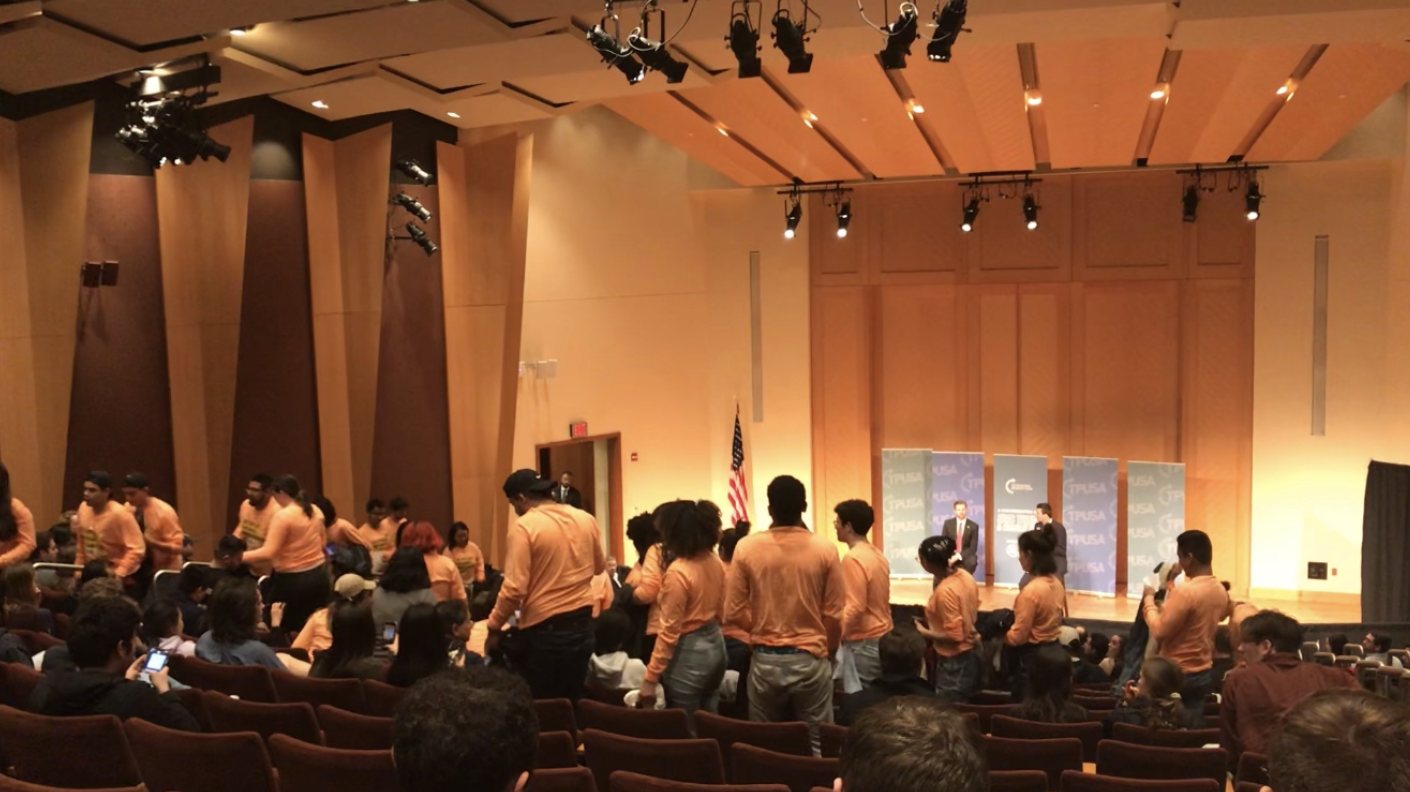 Promoted as a conversation between the two speakers, the event was open to the public but went unsponsored by GU Politics or Georgetown University. Attendance originally required an RVSP, but was changed to first-come, first-serve with more than enough seats available for the approximately two hundred attendees.

The conservative campus groups Right to Life and The Georgetown Review both accepted tickets to the event, as did HFIR and the Bipartisan Coalition. GUCD rejected tickets it was offered, while H*yas for Choice were not offered reserved seating.

Prior to the event, GUCD released a statement objecting to the presence of both speakers, but mentioned Kirk specifically, citing racist and xenophobic quotes from multiple employees of his company, Turning Point USA. While GUCD did not call for the event to be shut down, they called on individuals and campus groups to boycott the speakers. On the night of the 25th, GUCD stood outside Lohrfink and talked with people that were lined up to enter.

In an interview with the Voice, GUCD Chair AJ Williamson (COL ‘21) argued against the proposed value of Trump and Kirk’s perspectives.

“People have claimed that it’s about promoting dialogue and representing ideological diversity, but we don’t understand the value of having an ideological diversity that extends to overt bigotry,” he said. “Our position is that by attending this event, you are legitimizing their presence on this campus.”

In response to GUCD’s condemnation, GUCR announced that it stood by the decision to invite Trump and Kirk, calling their ideas “mainstream.” They also declared GUCD’s statement, including the list of Turning Point USA controversies and quotes, to be “slanderous attacks against our character.”

The main protest came a few minutes after Trump and Kirk walked on stage, with a group of around 30 students silently leaving in unison. They were dressed in orange shirts provided by HFIR with the words “Unstoppable. Undeniable. Undocumented. Unafraid.” written on the front.

As the protestors began to exit the auditorium, Kirk sarcastically said, “Ladies and gentlemen, the tolerant left.” A large portion of the remaining crowd began to clap or laugh at the participating students, some of whom responded by raising fists as they walked out.

Trump continued to mock the group after they had left, including targeting the color of their clothing. “You see these people dressed in orange jumpsuits like they’re just out of prison,” Trump said. “That’s got to be the weakest protest I’ve ever seen.”

Almost 40 minutes later, Trump mentioned the protestors again, saying “I’m almost disappointed in my alma mater—I was hoping to have a water bottle thrown at me, it would have been great.”

While the rest of the event did not see any more protests, Trump and Kirk both directed jokes and attacks throughout the night at a trio of students dressed in Bernie Sanders shirts, at various times calling them “hypocrites” and “Marxists.”

One protester, Jade Ferguson (SFS ’22), spoke with the Voice before the event about her reasoning for walking out.

“[GUCR] truly takes drastic measures to make people on campus feel uncomfortable,” she said. “I’m tired of seeing speakers come to campus who have absolutely no respect for my right to exist, and I’m just here to say something.”