As a faint short film flickers on the wall across from the exhibit’s entrance, the sound of skateboard wheels on concrete rumbles throughout the room. A jumble of small sculptures lies scattered across the floor of the Maria & Alberto de la Cruz Gallery. Rather than clay or marble, the small figurines are made from discarded skateboard parts, fashioned to resemble abstract shapes, human faces, snails, and lizards. There are hardly any conventional materials in the exhibit—some pieces are made of old books, while others are constructed from large, white, worn wooden panels. The only traditional elements used are the many photographs lining the right-side wall, bringing Chemi Rosado-Seijo’s many community-based projects onto Georgetown’s campus.

Comunidades en Movimiento, Rosado-Seijo’s first solo exhibit in the mainland United States, is being shown in the de la Cruz Art Gallery until April 8. Rosado-Seijo was born in Puerto Rico and much of his art is rooted in his home culture. A press release from Georgetown University describes Rosado-Seijo as “equal parts artist and community organizer.” Through his direct engagement with communities, Rosado-Seijo dismantles the idea that art must be inaccessible and pretentious. The whole point of his projects is to get the people involved; Rosado-Seijo incites entire neighborhoods to participate in the production of art.

One of Rosado Seijo’s most extensive projects is El Cerro. Photographs of this project show multitudes of houses painted green, clinging to the titular mountainside. In 2002, Rosado-Seijo began painting El Cerro residents’ houses various shades of green, initially working alone. Soon, however, El Cerro residents began to paint with him. Although the green paint causes the houses to blend beautifully into the mountainside, creating a breathtaking effect, it is the process of the people coming together and painting the houses as a group that stands out as the most poignant aspect of the project.

Rosado-Seijo remembers this piece fondly. “I’ll always be proud of El Cerro Project. It was the most collective experience towards an artwork that I’ve experienced,” he said in an email to the Voice.  “[It] is such a morphing project, that keeps going from aesthetics to social justice constantly.”

In Documentación de Salón-Sala-Salón, Rosado-Seijo explores the role different institutions have in education. At the Museo de Arte Contemporáneo de Puerto Rico, Rosado-Seijo persuaded the museum staff to set up an exchange with a local school. The staff built a functional classroom in the museum and then moved a small gallery into the classroom. As a result of this exchange, children were able to experience the opportunities for reflection and introspective educational value museums provide.

His projects draw from the history, culture, and traditions of the locations in which he works. Rosado-Seijo explained that his inspiration for his art always involves drawing upon local heritage. “There’s always something great and inspiring in any culture, natural space, communities, and more in the self-built barrios.”

A photograph of Rosado-Seijo’s first public piece, El Trampolín, depicts the silhouette of a man leaping off of a diving board. Rosado-Seijo illegally installed the diving board on a historic bridge in San Juan, at a site where teenagers typically swim and dive into the ocean. Rosado-Seijo describes this project as “hyperrealism,” the act of amplifying a pre-existing cultural practice.

Rosado-Seijo’s other great passion is skateboarding, a motif which recurs in several pieces in the exhibit. He views skateboarding and art as intimately connected. Although Rosado-Seijo first developed a passion for skateboarding in his early teens, he admits that his interest was facilitated “always by the hand of art. The board graphics got a lot of my attention.”

In Comunidades en Movimiento, he explores the intersection between skateboarding and community in a short film. The film depicts Rosado-Seijo and a group of collaborators building skate bowls around D.C.

His works are incredibly charming; everything has a very DIY feel. The short film, featuring sped-up footage of his collaborators building these structures, makes the viewer feel the frenetic energy one would typically associate with skateboarding. The footage is interspersed with shots of police hovering near Rosado-Seijo’s group, adding to the exhibition’s rebellious atmosphere. “In the mid-’80’s when I started skateboarding, and skateboarding wasn’t that popular, actually was a little bit of a rebel act,” he wrote.

Documentación de Festival de Chiringas exemplifies Rosado-Seijo’s focus on the revitalization of local traditions. Beginning in 2014, Rosado-Seijo began hosting workshops in a low-income neighborhood in La Perla. These workshops revived the kite-making craft traditional in that area. Flown together at an annual festival,  each kite symbolizes the individuals who made them. Thus, the kites are a physical representation of the community being united through these workshops.

The very nature of this piece is transient—the results of these workshops are not displayed in the gallery, and the kites are presumably with their makers. All the audience gets to see is a photo of a lone man flying a kite on the seashore. But the work isn’t for the audience—it’s for the participants themselves. The idea of a final product to put on display for gallery viewers is simply not the point of Rosado-Seijo’s work. His work is less about the permanence of a final product and more about the sense of belonging it creates.

Although most of the art itself is not displayed in the gallery, the exhibit remains incredibly accessible. The gallery texts, written in both English and Spanish, explain the background of each piece, detailing what the piece means to the creator and the community. Rosado-Seijo even included a selection of books in the exhibit on the history of contemporary art and skateboarding. This contrasts heavily with the setup typically seen in modern art galleries, which provide little information to their viewers in an effort to force the viewer to come to their own conclusions. In application, this practice is exclusionary and runs entirely contrary to Rosado-Seijo’s mission of educating and bringing people together. In the detailed explanations he provides for his pieces, Rosado-Seijo’s commitment to accessibility shows even through the smallest details of the exhibitions.

What Rosado-Seijo’s works all have in common is an emphasis on creating a lasting impact on communities. He deliberately ensures that his works have durable impacts on the people he works with. Be it the installation of a classroom in a museum or the creation of annual kite-flying festivals, each of Rosado-Seijo’s projects give something back to the people he works with. 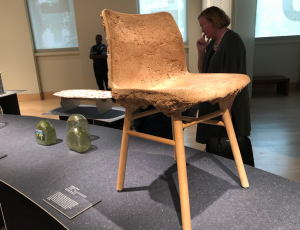