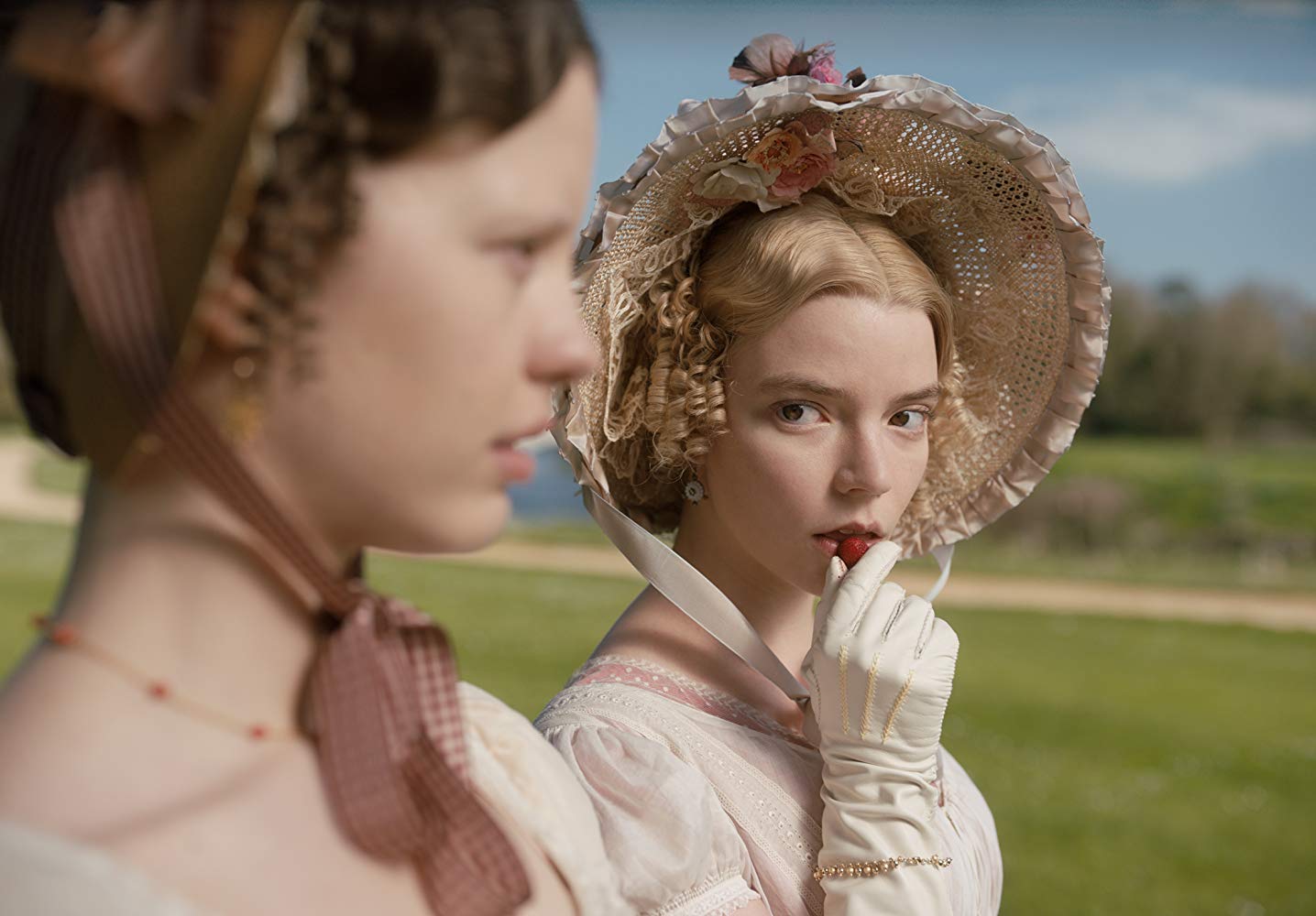 “I would like to see Emma in love. And in some doubt of a return. It would do her good.” In one of his first on-screen appearances, Mr. Knightley (Johnny Flynn) speaks boldly of Emma’s selfishness—the two equally headstrong individuals seeking, perhaps futilely, to humble each other. A sparkling combination of hilarity, candidness, and frivolity, EMMA. (2020) gives new life to a classic story through a masterful understanding of its source material’s satirical nature.

EMMA. is the latest in a long line of adaptations of Jane Austen’s classic novel. Emma Woodhouse (Anya Taylor-Joy) is a self-centered, manipulative, upper-class woman in Regency England. Determined not to marry, she fills her days creating matches for those around her. She becomes obsessed with finding the perfect high-status man for her friend Harriet (Mia Goth), an exercise in futility as Harriet’s unknown parentage hinders her from garnering interest from high society, and Emma’s exploits begin to blow up in her face. At the same time, Emma continues a flirtatious relationship with her lifetime friend, Mr. Knightley, and slowly starts to realize she has affections for him.

Emma is hard to please and full of pretense. She wears beautiful dresses with her hair up, perfectly coiled. She is never vulnerable and always has a biting remark or a withering stare. She moves with ease about her home and her high-society world. She takes what she can from others and never lets anyone—save sometimes Mr. Knightley—let her doubt herself in doing so. Emma is the center of the story, the titular character, and the filmmakers never let their audience forget this. The camera zooms in on Emma’s patronizing reactions, her eye-rolls and distracted stares out the window, as the dialogue of other characters rambles on in the background. Whether the scene is simply a comedic moment or truly an important plot point, when Emma is in the room, she is the focus. The filmmaking mirrors Emma’s self-involved personality; she does not act without thinking how it will serve herself, and we cannot observe the world around her without seeing its immediate effect on her sensibilities and her mood.

EMMA. is a beautiful film. The pastel color palette, the lavish homes, the long extended shots of the countryside are not only aesthetically stunning, but all serve to create the tone of a perfect world. Too perfect, perhaps. The film leans into satire even in its design elements, as the houses and the landscapes are too spacious and can be filled only by the large, boisterous personalities of their occupants. Similarly, the costumes are gorgeous, and the hairstyles are striking and ridiculous. Mr. Elton’s wife (Tanya Reynolds) at one point has an ornament hanging off of her already overly-large head of curls. As the tone of the rest of the movie is exaggerated, so too are the characters’ appearances and physical surroundings.

These stylistic choices are emblematic of the tone of the film, which leans into the satirical elements of Austin’s novel. The film recognizes the inherent absurdity of the stresses of the 19th-century British bourgeoise, and as a result never takes itself too seriously. In fact, watching the movie often seems like watching a play, as the long rambling dialogue and acting choices of many of the leading characters create a heightened reality, one that resembles our own but always leans into the drama. Emma’s cattiness, Harriet’s insecurity, and Miss Bates’s bubbliness are all played up, providing for quite a bit of dramatic irony and quite a few laughs. While this may make the characters seem rather two-dimensional at first, for a film whose largest conflict is Emma making a rude remark at a picnic in the countryside, it works.

Sadly, it is this lack of true conflict that also causes EMMA. some pacing problems toward the end of the film. The jovial, fast-moving tempo of the first three-quarters of the movie slows to a somber stop after Emma makes an insult that appears to go one step too far. However, it is hard to distinguish this rude remark from all others she has made throughout the film, making the huge, upset reaction and ensuing fights seem to be without proper justification. Emma retreats inside herself, the pretenses put up earlier in the film abandoned. We see her cry, we see her vulnerable, we see her hair taken out of its tidy, well-kept coils for the first time. Emma’s front is abandoned, and it’s dramatic, but it’s short and rather unwarranted if her behavior has been tolerable thus far. It seems that for the 90 minutes of abrasiveness, the film could spend more than three or four two-minute scenes tearing Emma down.

However, the film’s ultimate goal becomes clear by the finish: Emma must reconcile with her own selfishness before she can meet her own happiness. The last act of the movie differs from that of Austen’s novel in a way that makes sure Emma becomes a sympathetic character, deserving of her ending. Moreover, the film never abandons its mockery of the society it inhabits, even as it leans into the joy. Its end is both funny and beautiful, touching and ridiculous, and leaves a smile on the viewer’s face without any lingering guilt.