The Georgetown Alliance of Graduate Employees (GAGE) reached a tentative labor deal with the university on May 1. The three-year agreement, which secures pay raises, additional protections for victims of sexual assault, and new health benefits for 1,000 GAGE members, will be the first-ever union contract for graduate students at Georgetown. The agreement was ratified by GAGE with 99 percent support on May 8.

The contract comes after a year and a half of negotiations between the union and the university. Graduate students first voted to unionize in November 2018 to push for expanded healthcare coverage, a better system for reporting workplace harassment, and increased worker compensation. Ph.D. students in particular, who say they are contractually prohibited from working a second job, argued that their stipends were insufficient for covering the cost of living in D.C. and that many could not afford to pay rent.

Jewel Tomasula, a doctoral student and member of GAGE’s bargaining committee, celebrated the tentative contract creating a more inclusive and equitable university for graduate workers. “This is a big step in the right direction toward making Georgetown a place that anyone can consider to come to do their Ph.D.,” she said. “The situation was exclusive for the wrong reasons; you had to have a lot of independent safety nets or else you were stuck.”

“As soon as it goes into effect this fall, it’s going to make a big difference to the people currently graduate-working at Georgetown and for the future,” Tomasula added.

The agreement increases the minimum stipend amount for Ph.D. students and significantly raises the minimum wage for master’s students. For Ph.D. students, their nine-month minimum stipend will be increased from $29,000 to $32,500, and their 12-month minimum stipend will be raised from $31,000 to $35,500. Master’s students’ minimum wage will be boosted from $13.50 to $19.50. Each of these pay raises will also be coupled with a two percent annual pay increase every year for three years.

For the first time, the contract guarantees six weeks of paid medical leave for all Ph.D. workers. The university will also establish an Emergency Assistance Fund of $50,000 per year, which will provide for graduate workers facing extreme financial difficulty due to medical complications, bereavement, or other issues.

The bargaining team also secured healthcare provisions that expand access for graduate workers. Currently, graduate workers get their healthcare from the Student Health Insurance plan, which does not include dental care; the university has agreed to pay for Ph.D. students’ dental premiums going forward. Furthermore, the out-of-pocket maximum for Student Health Insurance will be lowered from $5,000 to $3,000 for both graduate and undergraduate students on the insurance plan.

One key concern for GAGE was increasing the number of therapists in Counseling and Psychiatric Services (CAPS) for all students. Through the tentative contract, GAGE will be part of a joint task force dedicated to bringing new therapists into the student health network and have a legally-binding commitment from the university to increase the diversity and capacity of CAPS.

Lastly, the agreement includes a grievance procedure for filing sexual harassment and discrimination complaints from graduate workers. Through the procedure, the university will have a deadline for responding to complaints, and a union representative will be able to hold the university accountable for addressing the grievance.

Graduate workers are relieved to have this contract and its benefits in the midst of the Covid-19 pandemic, according to Jeremy Canfield, a doctoral student on the union’s organizing committee. “In the current environment, there’s a lot of uncertainty for a lot of folks,” he said. “Having a good strong contract that protects people’s financial interests and protects grad workers’ healthcare needs was really important to us.”

Canfield highlighted the role of the entire union membership in securing these comprehensive benefits for graduate workers. “The bargaining team did amazing work, and we’re so proud of them,” he said. “Underscoring that work and making it possible is the work of the organizing team with GAGE and all of the members who showed up both in person, showed up to meetings, and showed up to actions throughout this whole process.”

GAGE members are expected to ratify the tentative contract in a union-wide vote next Friday, after which the agreement will become an official union contract.

Emphasizing that GAGE will continue to advocate for graduate students going forward, Canfield expressed happiness at the union’s success. “There’s pretty much a universal feeling of excitement,” he said. “We have worked tirelessly for this; it’s been a long fight.”

This article was updated to reflect the Ph.D. stipend increases and the ratification of the agreement. 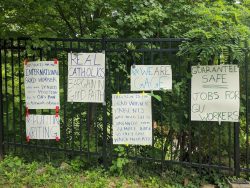 ‘How close we got’: The Georgetown RA union that almost was

[…] bargaining agreement, in this case, the union contract signed by GAGE and the administration this May after a year and a half of negotiations. In mid-July, GAGE entered bargaining meetings with the […]