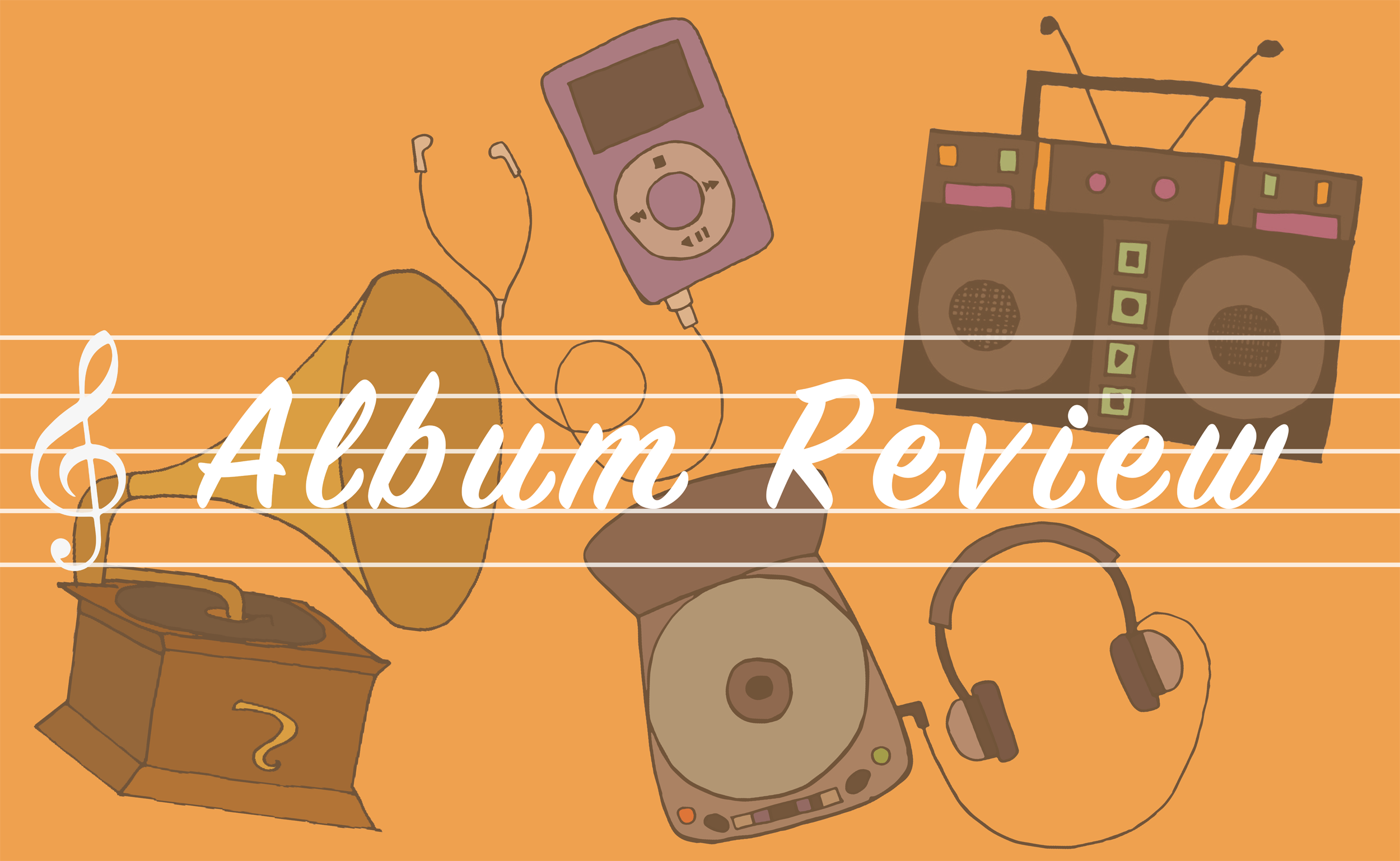 Ariana Grande presents herself on her own terms, in all her flaws and vulnerabilities, in her sixth studio album titled Positions (2020). In this newest release, she delves deep into her story of personal growth, exploring the journey of who she has come to be. Despite following the looming giants that are its hugely successful predecessors, Sweetener (2018) and thank u, next (2019), Positions finds its own footing within chill trap, pop, and R&B beats; impeccable vocals, as always; and consistently gorgeous orchestral arrangements.

Grande’s tumultuous past few years have already been documented and scrutinized, but she puts an end to the speculation and frees herself from the start in the opening track, “shut up.” The title aptly suits Grande’s darkly honest humor, but its lyrics and sound prepare listeners for her gentle admonitions toward those who claim to know her, as she sets the record straight and beckons an open ear.

An array of softly mournful string instruments fills the first several seconds until Grande’s low, sweet-toned voice brushes over staccato plucks. “My presence sweet and my aura bright,” she declares assuredly. “All them demons helped me see shit differently.” Her established proficiency in harmonies enters into the mix immediately, as a chorus of Arianas unify to combat an imaginary collection of gossip and Internet haters. She swiftly plunges into the delightfully trilling chorus of “You know you sound so dumb / So maybe you should shut up.” The juxtaposition of Grande’s always agile runs and her straightforward suggestion-yet-also-request results in a pleasantly wonderful introduction into her surprise project. Preparing listeners for the ride ahead, “shut up” serves as a candid opening to the album.

Positions creates a truthful foray into Grande’s recent increasingly private life ever since thank u, next. This time, if it was not clear already, her music speaks for itself. One big change, which she slowly revealed in stages throughout quarantine, is her seemingly quite serious relationship with a Mr. Dalton Gomez, a successful twenty-something real estate agent. The album navigates new love—both the falls and triumphs—and healing from the past, an obstacle with which both her fourth and fifth albums grappled heavily.

That is not to say that the album is only serious and probing—in fact, the very next song after the earnest “shut up” is an unabashed celebration of intimacy and connection called “34+35” (you do the math). A short sound bite of Grande’s sultry chuckle opens the gloriously sex-dominant track that faces the still somewhat taboo topic of female sexuality. Grande’s opening laugh should be taken into account as well, though—she has defended that the song was not meant to be taken totally seriously. Her goal was to preserve the integrity of the earnest artistry in the rest of the songs while creating a fun track with opposingly dirty lyrics.

“34+35” certainly does its job, filling the smoothly climbing and falling beginning strings with innuendos and blatantly sexual lyrics galore. The whole two-minute, 54-second track is hilariously dirty. The high-tempo, skipping beat behind Grande’s alluring singing and playful echoing of herself makes for an instantly catchy hit. The song may be mostly about sex, but “34+35” shows that at some level, Grande has embraced the new infatuation and thrill of love.

The theme of sensuality continues, but hesitation enters as well. In each collaboration with featured artists, Grande tests and teases out the possibility of love. The Weeknd returns as an interlocutor and companion to join Grande in the emotionally wrenching ballad “off the table.” Pure vulnerability strikes deeply from the opening lyric, “Will I ever love the same way again? / Will I ever love somebody like the way I did you?” Haunting, low vocal distortion tracks her statements, like the answer she hopes not to hear. The track operates in a relatively quiet atmosphere—like the deepest chambers of one’s heart or the backmost recesses of the brain, where present fears and past hurts lurk. In “safety net,” Ty Dolla $ign reveals his own melodic voice to harmonize with Grande’s light yet powerful soprano. Whereas the beginning songs trace infatuation, flirtation, and possibility, “safety net” leads into the section of Positions that falls freely into deep and consuming love.

In “motive,” featuring Doja Cat, the punchy beat feels standard, but with a tinge of disco, familiar to Doja’s discography. Even while having one of pop’s biggest stars in its corner, the track is unfortunately one of a few on Positions which feel somewhat dull, with nothing as fresh or game-changing as thank u, next. With a retro beat, claps, and some mild switches in flow, the song is still cool and catchy, yet not the shining jewel of a song it could have been.

Other songs do not leave jaw-dropping first impressions, either. Days of the booming pop anthems “Dangerous Woman” and “Break Free” have possibly passed in favor of more mature-sounding, earnest records. Though they are clear views into Grande’s journey to love and healing, “west side” and “six thirty” may be overlooked at first. The former is only a little over two minutes and glides along with the help of low, murmuring vocals. “I’ll bring the light right back,” she promises confidently, a reinvention of the Nicki Minaj-accompanied track “the light is coming.” The latter, “six thirty,” asks for confirmation from a lover that, like the two clock hands, they are “down like six thirty,” with bouncing tones and snappy percussion that mimic clock ticking. The repetition of “are you down” is simplistic, maybe too much so for some listeners, but of course Grande sprinkles in artful vocal flourishes and runs. All in all, both contain the euphoric combination of a cooing, glossy tone, paired with sensitive, mature lyrics and masterful production.

There are some surprises on the album, however. The track “love language” opens to jaunty whirls of violins. Jazzy elements move the song at a midtempo pace to Grande serenading her lover and transitioning effortlessly from a confiding whisper to alluring encouragement. The starkly different outro features a cute allusion to the occupation of her new beloved: “I ain’t tryna sign no lease / I’m just gon’ make you my home.” At first impression a bubblegum-pop adjacent track, “just like magic” surprises with thumps and skips to Grande growing and finding her best self. Grande finds her shine in “just like magic,” a glitzy track about manifesting goodness and sending “love and light.”

Similarly, “my hair” is a standout song that definitively marks new territory. Grande’s hair has received tons of attention over the years, and she herself names her hair as an integral part of her career. Her tresses serve as a marker of who and what she has been—the red hair is her Nickelodeon kids’ show past, her natural curls ground her to who she has been before any ounce of fame, and the pony is her stage persona. She directly addresses the topic while submerging into R&B elements, hidden at first with gentle strumming and then revealed through snaps and deep bass.

“Don’t you be scared,” she purrs, “to run your hands through my hair.” One of Grande’s talents is her ability to shift genres effortlessly, and she shines here. Her sultry coaxing slinks over intimate confessional: “This ain’t usually me / But I might let it down for you.” In “my hair,” Grande beckons with low harmonies and pines bold and full up until the last chorus, which is where her vocals ascend into the arena of otherworldliness: she whistles the entire last chorus. Showing mastery over an infamously tricky range to access, she showcases her yearning further, articulating each word in a skyrocketing key. Her whistle tones are always a source of awe, whether she is hiding them as a background element in “nasty” or brandishing them as evidence of joy.

The last three songs are a perfect trifecta: “positions,” “obvious,” and “pov” are excellently crafted, gorgeously written, and vocally stunning. The first serves as the perfect snapshot of the sonic and thematic trends of the whole work. Containing more meaning beyond just sex, “positions” highlights Grande’s commitment to love and newly found healthy relationship. The guitar twangs into uptempo percussion over Grande’s flexible, robust performance is a match made in heaven. “Know my love infinite, nothing I wouldn’t do” is the constant declaration. This era promises Grande at ease, not only personally, but even more so vocally.

The upbeat title track sears the way for the criminally too short “obvious,” a relaxed, blissful tune over caresses of strings and gently treading beats. Every lyric and facet of production feels meaningful and necessary, no seconds left to spare. She narrates a normal day and the overwhelming specialness of it all: “I love the taste of you in the morning / Keeps me warm, and / Nothing else, nothing more important / Makes me wanna believe in love.” Supporting harmonies chime in, nestling the listener with the warmth and fulfillment Grande feels herself. Love emanates most clearly and effortlessly from “obvious” and should definitely not be overlooked.

If the previous track is upfront and obvious, then “pov” (short for “point of view”), is a deluxe, lush ode to the purity of unconditional love. Positions hits its peak in its conclusion, an intense and immaculate ending to the road toward love and healing. Light, echoey piano notes fill the song with airiness. Grande’s opening breath flows into a delicately raw baring of her soul. “I wanna love me, / The way that you love me,” she says, in awe of her partner’s full acceptance “for all of my pretty / And all of my ugly, too.” Sustained and whispered background notes saturate “pov” with a safe, angelic peace, but not for long. Grande’s voice builds, strengthening, with the first repeat of the chorus. She retreats carefully to pull out more kernels of hard-won truths: “I won’t keep you waiting, waiting / All my baggage fading safely.” In thank u, next’s “ghostin,” Grande’s most emotional and personal song yet, she mourns, “I’m a girl with / A whole lot of baggage.” But in “pov,” at the close of her newest album, Grande makes a clear statement on where she is. The last rendition of the chorus is flooded with unyielding passion, Grande’s usual breathy tone replaced by rasp, signifying her victory in love. The whole song wraps up with a melodic flutter of a wistful “I’d love to see me from your point of view.”

Positions is not Sweetener or thank u, next—nor should it be. While Grande’s sixth album contains elements of both, such as the breezy optimism of the first and the dense vulnerability of the second, it delivers more fully in terms of narrative. The album keeps in tune with Grande’s recent sound and wraps up the very public last few years; now, Grande has grown and is moving on fully. Positions has been divisive—some criticize the songs as too brief, maybe not as vocally forceful as those in the past, or possibly not different enough in terms of sound. However, the album does a stellar job of delivering what fans always crave: Grande. The project reveals her core: unfiltered sincerity and unique vocal artistry. The material, bolstered by a range of producers and featured artists, transitions her into a happier chapter with cohesion and beauty. Ultimately, any listener can appreciate the progression of Grande’s journey and hopefully, eventually discover each song’s allure with every new listen.