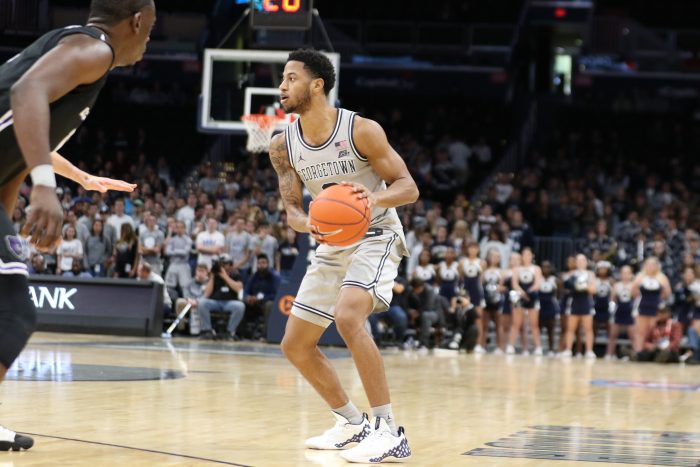 Georgetown’s play in the first two games could favorably be described as inconsistent. After beating UMBC (1-1, American East) to kick off their season, the favored Hoyas fell flat against the Midshipmen of the Naval Academy. Georgetown struggled to defend Navy’s senior guard Cam Davis and junior guard John Carter, who combined for 48 points. On the offensive end, the squad struggled to find cohesion besides a few short stretches. In a press conference earlier this week, Head Coach Patrick Ewing believes that the more time his players spend together, the smoother the on-court product will be.

“We’re still building and still learning each other,” Ewing said. “When you have nine new faces it’s hard to just pick up things and get back to winning ways. It’s going to take some time to adjust.”

In the game against the Mids, Georgetown was led by senior guard Jahvon Blair and senior forward Jamorko Pickett who each scored 17 points. Sophomore center Qudus Wahab put up 16 points and seven rebounds. Overall, the box score did not paint a rosy picture for the boys in blue and gray. The Hoyas were outscored 40-24 in the paint, despite a sizable height advantage. They were also forced into 13 turnovers.

“We talked about the mistakes that we made, the things that we need to improve on, what we need to do to be a better team, and, after yesterday, we moved on,” Ewing said.

On the other sideline, West Virginia showed a lot of grit and grind on their way to taking the top ranked Zags down to the wire. In that game, junior forward Derek Culver led the team with 18 points and 15 rebounds and was supported by sophomore forward Oscar Tshiebwe’s 14 points and 9 boards. Sophomore guard Miles McBride chipped in 10 points and 5 assists and senior guard Taz Sherman scored 12 off the bench. West Virginia was actually leading Gonzaga by 5 at halftime, but a second half flurry gave the West Coast powerhouse a lead they wouldn’t relinquish.

The Mountaineers are led by the 6-10 Culver and 6-9 Tshiebwe. Ewing was effusive in his praise of the duo, saying they were “relentless” and “eat glass.” The two combine for 20 rebounds per game, with 7.5 of those on the offensive end. Ewing knows that they will be tough to keep down.

“It’s going to be a challenge for anyone, not just my team,” he said. “In order to beat a team like that, it’s going to take the entire team.”

The way to beat West Virginia comes from attacking the basket and getting their big men into foul trouble. Gonzaga scored 60 points in the paint against the Mountaineers, with 40 of those scored in the second half when Culver and Tshiebwe only played 13 combined minutes before fouling out. However, even if the Hoyas do penetrate and draw fouls, the team is currently shooting a putrid 58 percent from the line over their first two games, a number that Ewing knows needs to improve.

“We shoot free throws every day. These guys are going to have to step up there and make it,” Ewing said.

5 numbers to know for Georgetown

21 The three point percentage of senior guard Jahvon Blair, the team’s leading scorer. Blair has never been an efficient scorer, but he needs to at least bump this figure north of 30 percent in the near future.

8 The number of fouls accrued by sophomore center Qudus Wahab so far this season. The Hoyas play markedly better when Wahab is on the court, and he will need to play big minutes if Georgetown has any hope of reigning in the twin towers of Culver and Tshiebwe.

2 and 0 Two is the amount of offensive fouls called on senior guard Don Carey against Navy, while 0 is the amount of free throws taken by Carey in the same game. If Georgetown has any chance against West Virginia, it will be by attacking the basket and drawing fouls, but it can’t be done recklessly.

7 The number of minutes freshman guard Kobe Clark played against Navy after pulling in 10 rebounds in 12 minutes against UMBC. Clark’s size and physicality will be needed against the Bob Huggins-coached Mountaineers, so he should be in line for increased minutes in this one. 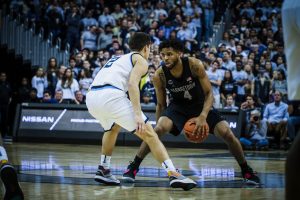 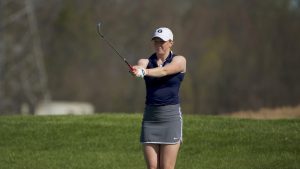 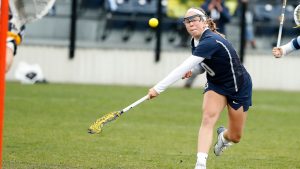