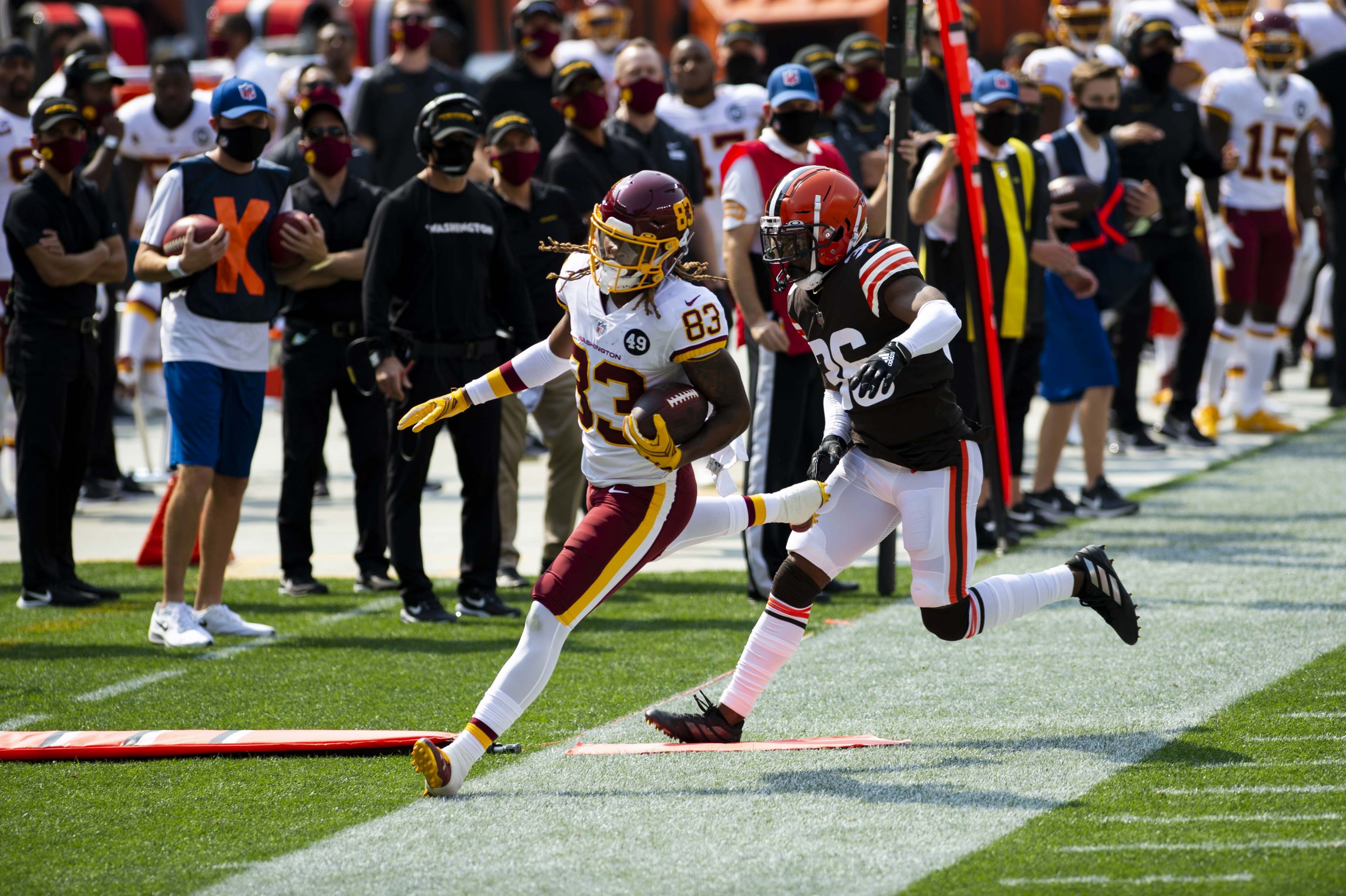 When my Washington Football Team won this past week, clinching the division, I laughed and laughed and then laughed some more.

It wasn’t the kind of celebration I am accustomed to.

I’m generally a pretty loud guy who’s not afraid to get super pumped up when things go my way. This time, things just felt different. First off, it wasn’t a very convincing win, and I will later dive into the controversial things that the Eagles did over the course of their game vs. the WFT to aid the Football Team’s victory. But overall I felt a much greater sense of accomplishment when the WFT beat the Steelers in Week 13 to ruin their undefeated season. It was still a happy feeling this time around, but also a somewhat empty feeling. I figured it would be smarter to collect my thoughts instead of tweeting endlessly into the void, so here we are.

Obviously the first question on everyone’s mind is whether or not the Eagles threw the game. The consensus was that two decisions made no sense if the Eagles were trying to win: a call to go for it on 4th and Goal from the 3-yard line, and the call to replace starting quarterback Jalen Hurts with third-string quarterback Nate Sudfeld. I can almost entirely dismiss the 4th and Goal call. Eagles head coach Doug Pederson is known for doing this type of gamble, betting that his team can get 3 yards with a 4 point payoff. If they had scored the touchdown in that situation, Washington’s offense was so inept in the second half that we might not even be discussing the issue of throwing the game. With absolutely nothing to lose, it wasn’t a surprise they decided to go for it on 4th and Goal, and Hurts nearly made the play to a wide-open receiver on the back line of the end zone.

Before we address the second point, I think it’s important to draw a distinction here between tanking and throwing a game. To me, tanking implies some type of systemic, long-term plan to sacrifice wins now for wins in the future. It’s very hard to prove that a team is intentionally losing a game in the tanking process because the talent that they have at the beginning of their season is significantly worse than the league average. Furthermore, the deals such teams make are clearly pursuits of greater value, like trading away a few talented players for a large sum of draft picks. The classic example in football is the 1989 Dallas Cowboys, who traded Pro Bowl running back Herschel Walker in exchange for a boatload of draft picks that eventually became Pro Bowl defensive tackle Russell Maryland, All-Pro defensive backs Kevin Smith and Darren Woodson, and Hall of Fame running back Emmitt Smith. Looking back on the trade, the Cowboys clearly got the value they desired, and it is difficult to definitively prove that they tried to lose individual games. On the other hand, throwing a game is a very simple short-term proposition: intentionally losing a game, regardless of the reasons behind it. There is no long-term plan associated with throwing any one individual game.

If there was any season-long plan for the Eagles to tank, I didn’t see it. In all their wheeling and dealing, I would be hard-pressed to find value plays on the magnitude of the Herschel Walker trade, where they gave up significant Pro Bowl talent to gain huge future value. If the Eagles as a team tried to throw this game for a higher draft position, they did a poor job of it. Apparently nobody told the defense they were doing so, which held Washington to three points in the second half. Nobody told defensive linemen Brandon Graham and Javon Hargrave, who got pressure on Washington quarterback Alex Smith all night and made the fans clamor for backup quarterback Taylor Heinicke, who has completed all of 12 passes this season. Nobody told cornerback Darius Slay, who did a phenomenal job of limiting Washington’s top wide receiver Terry McLaurin to 40 yards.

Replacing Hurts with Sudfeld is the only area where the idea of throwing the game has some traction. The box score would tell us that Hurts was 7/20 through the air for 72 yards with an interception, and that he had 34 yards on the ground for 2 touchdowns. Watching the game would tell us that Hurts was the only reason why the Eagles were even in it to begin with, as his mobility had Washington’s defense guessing the whole night. On the other hand, Sudfeld turned the ball over twice in his first five snaps. Pederson’s excuse of evaluating him didn’t make much sense either, as he’d been with the organization for four years.

Yet, if the Eagles were really trying to lose this game, why wouldn’t they have thrown Sudfeld out there from the jump? Why would Graham, Hargrave, and Slay have played most of the snaps? Would it really have been better to Eagles fans (and Giants fans, we’ll get to them) if the Eagles announced their intentions from the beginning? I tweeted this during the game, but I think it’s worth repeating: it’s very hard to prove that the Eagles threw the game, and it’s much easier and likely more accurate to attribute whatever this was to the incompetence of the bumbling NFC East.

What the Eagles did was not necessarily that different from what the Jacksonville Jaguars did in a similar situation to cap off their regular season play. The Jaguars were locked into the top choice in the draft going into Week 17, win or lose, so they actually could’ve tried to go all out and sweep the Indianapolis Colts so that the Miami Dolphins would get into the playoffs. Instead, they sat starting quarterback Gardner Minshew and stud running back James Robinson, and they were down 20-0 from the jump. In my opinion, this is not a more noble strategy than what the Eagles did, but there wasn’t nearly the same kind of outrage from the Miami Dolphins players and fans, who were left out in the cold despite double-digit wins and an expanded playoff field.

I would also argue that what the Eagles did was no more egregious than what the New York Jets did at the end of the game against the Las Vegas (weird) Raiders, playing Cover Zero on the last play of the game even though they needed to prevent a touchdown. That play also sparked discussion about the integrity of the game and Jets defensive coordinator Gregg Williams lost his job for it. Then, the Jets went out and beat two teams with winning records, giving control of the first overall pick to the Jaguars. How happy do you think the Jets fans were when the Jets kept the integrity of the game and didn’t purposefully lose?

If teams throw games to achieve higher draft positioning for one pick, when has it ever really worked? The NFL Draft has always been and will always be about maximizing value by acquiring depth, and the highest value traditionally falls at the end of the first round and into the second. The Cowboys understood this in 1989, which is why they asked for a boatload of picks instead of just trying to go after #1. The Tampa Bay Buccaneers did not understand this in 2014, when there were allegations that they threw games to get Florida State quarterback Jameis Winston. That didn’t work out very well for them. Football is the ultimate team sport and even a talent like Clemson quarterback Trevor Lawrence cannot vault a bottom-feeder to the top by himself.

We’ve established that the Eagles did not have a long-term tank, the claim of throwing the game is questionable, and even if they did throw the game, outrage from the community should not be limited to just the Eagles. This brings us around to the New York Giants and the Miami Dolphins again. The Giants fans and players had a lot to say about Pederson’s tactics, but the fact of the matter is that they conceded control of their own destiny even though they did sweep Washington. The Giants had numerous opportunities coming down the stretch to leave their fate in their own hands, but they failed to do so and wound up at 6-10. They have far less of a right to complain than the Dolphins, who finished 10-6 despite marginal offensive talent. The Dolphins also ceded control of their own fate when they got smacked at Buffalo, losing by 30, and they owned that failure instead of blaming the Jaguars for tactics similar to the Eagles. The Giants have a good foundation in place, and head coach Joe Judge has brought a culture of accountability without trying to impersonate Bill Belichick. They will be fine.

Like this article, much of the discussion around this game is centered around what the Eagles did. As a Washington fan, I hope people don’t lose sight or perspective of what the Football Team did this year. Yes, they may be the worst division winner in the history of the league. That’s still a lot better than what they were expected to do. There’s still much work to be done off the field, but the on-field culture and product have truly turned around for the first time in two decades. This defense is fearsome and the team plays for each other. They will go into this playoff game against the Buccaneers with absolutely nothing to lose, and I expect them to play fast and loose.

This season is a triumph for the team, but for Alex Smith and head coach Ron Rivera, it represents the ultimate power of the human will. Two seasons ago after his gruesome injury and subsequent staph infection, the medical experts were just hoping to save Smith’s life and hopefully his leg too. When Smith first stepped on the field this season, he completed the greatest personal comeback in the history of professional football. There are no words I can write to adequately describe the significance of Smith’s accomplishments. It’s much of the same for Rivera. He took over a franchise with the most toxic culture in football bar none, and he instilled discipline and accountability on the field. He was diagnosed with cancer in a lymph node and he still coached every single day (shoutout to the Inova Schar Cancer Institute, I know they are amazing because they saved my life too). He and the team had every excuse, every distraction you could possibly have in an offseason, and they still sit atop the division here at the end of the season. Keep it all in perspective.

Washington is playing with house money, as Rivera openly said earlier in the year. If they pull it off against the Buccaneers, I’ll have even more reasons to laugh. 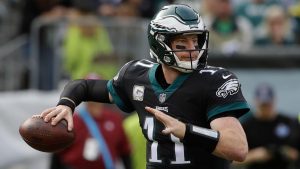